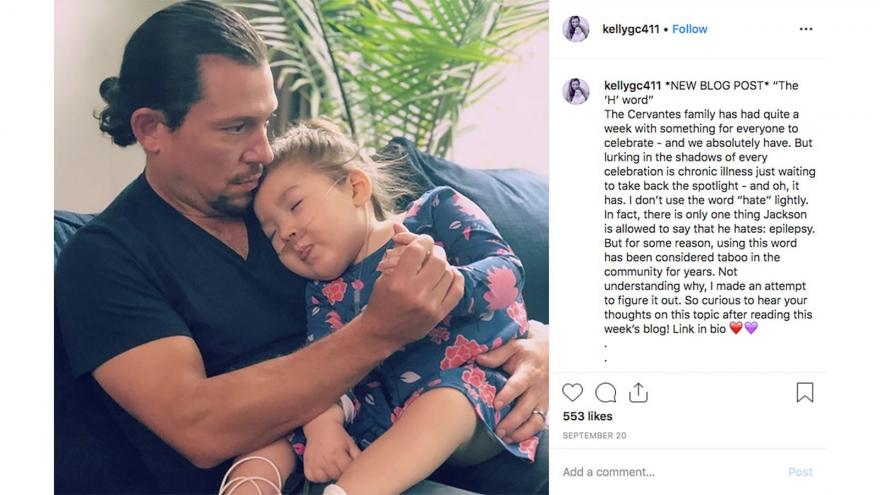 (CNN) -- "Hamilton" star Miguel Cervantes and his wife, Kelly, have paid tribute to their 3-year-old daughter Adelaide who died over the weekend.

"She was held in the loving arms of her family as she peacefully achieved the "calm" for which they've been searching for so long."

According to her mother's blog, Adelaide was diagnosed with epilepsy at seven months and later, infantile spasms, a severe form of childhood epilepsy.

Cervantes stars as Alexander Hamilton in the Chicago production of the hit musical "Hamilton" and the couple are also the parents of a son, Jackson.

The actor shared his wife's posting about the loss of their daughter on his official Instagram account with the caption "The machines are off. Her bed is empty. The quiet is deafening."

"Adelaide left us early Saturday. She went peacefully in her mother's arms, surrounded by love," the caption went on. "Finally, she is free from pain + seizures but leaves our hearts shattered. We love you so much Adelaideybug and forever after."

Kelly Cervantes posted a blog on October 4 about having to move Adelaide into hospice.

She wrote of living "A day at a time, taking our cues from Miss A, making decisions regarding her care I never could have imagined."

"But there are also some beautiful moments and memories being made along the way that we will cherish forever," Cervantes wrote. "And at the center of it all is the feistiest little girl I'll ever know who has no idea the impact she has made but really wishes mommy would give her some space and sleep in her own bed tonight. Not gonna happen, my love, not gonna happen."

In their statement Monday the family thanked those who had supported them.

"They would like to extend their deepest, heartfelt gratitude to all who have reached out with words of support and prayer and will continue to feel all the love as they go through this difficult time," the statement said. "Miguel will be out of the show briefly but plans to return soon."

The family said details for a celebration of Adelaide's life would be forthcoming and they asked for their privacy to respected during this difficult time.