Half of voters support impeaching Trump and removing him from office, new poll finds 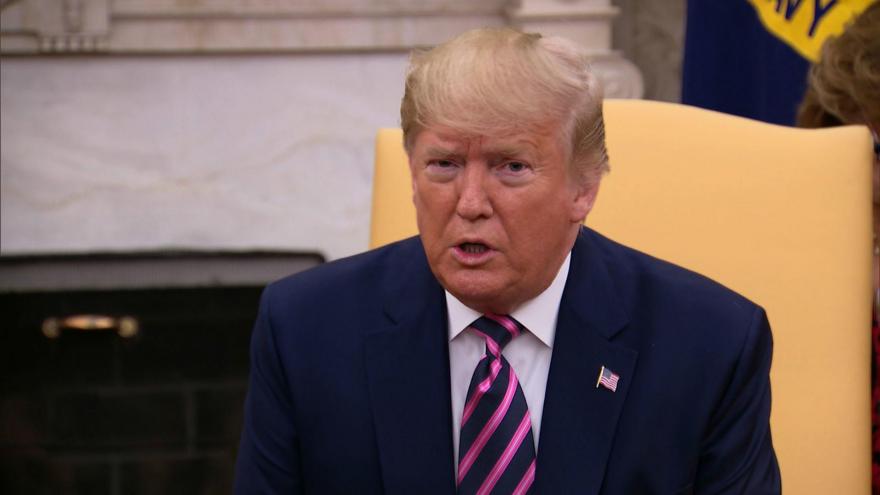 Half of American voters want President Donald Trump impeached and removed from office, according to a poll released from Fox News that was taken as House Democrats unveiled two articles of impeachment against the President.

(CNN) -- Half of American voters want President Donald Trump impeached and removed from office, according to a poll released Sunday from Fox News that was taken as House Democrats unveiled two articles of impeachment against the President.

According to the poll, another 4% of voters surveyed nationwide say the President should be impeached but not removed from office, and 41% oppose impeachment altogether. Respondents were surveyed for the poll between December 8 to 11, and the results remain unchanged from the last two iterations of the poll, which were conducted in October as Democrats probed Trump's dealings with Ukraine.

The latest poll comes the same week House Democrats are expected to pass two articles of impeachment against Trump, charging the President with abuse of power and obstruction of Congress. The full House vote is expected to set up a trial in the Senate.

According to the December poll, 53% of voters say Trump abused his power, 48% say he obstructed Congress, and 45% think that he committed bribery. Sixty percent of voters say it is generally wrong for Trump to ask leaders of foreign countries to investigate political rivals.

The House this week will consider a charge that Trump abused his power by withholding nearly $400 million in US military aid and a White House meeting while pressuring Ukraine's president to investigate a potential political rival. The second charge accuses Trump of obstructing Congress by thwarting the House's investigative efforts.

On Sunday, the poll showed that registered voters are split over whether Democrats in Congress are running the impeachment inquiry fairly, with 45% saying they are and 42% saying they are not. Republicans have criticized how Democrats have handled the impeachment proceedings, questioning the fairness of the process and demanding their own witnesses. Democrats, though, have dismissed those claims.

Later Sunday, Trump tweeted that polls from Fox have a history of getting "it all wrong" and claimed, without evidence, that the network's surveys are biased.

The new poll also surveyed registered voters on the 2020 Democratic presidential contest, finding that former Vice President Joe Biden is leading the pack of contenders with 30% of voters saying they want to see him as the party's nominee. Vermont Sen. Bernie Sanders is in second at 20%, while Massachusetts Sen. Elizabeth Warren came in third with 13%. Pete Buttigieg, the mayor of South Bend, Indiana, landed at 7%, while former New York Mayor Michael Bloomberg and Minnesota Sen. Amy Klobuchar were at 5% each.

Hawaii Rep. Tulsi Gabbard and entrepreneur Andrew Yang are at 3% each and New Jersey Sen. Cory Booker is at 2%.

Next week, Biden, Warren, Sanders, Buttigieg, Klobuchar, Yang and businessman Tom Steyer will participate in a Democratic debate in Los Angeles where the candidates will likely face tough questioning on their positions ahead of the start of the primary season.

Looking ahead to the general election, hypothetical matchups in the poll show Biden, Sanders and Bloomberg each topping Trump by a significant margin, while Warren and Buttigieg each run about even with the President.

The Fox News Poll was conducted by both landlines and cellphones from December 8 to 11 with 1,000 randomly chosen registered voters in the United States. The poll has a margin of sampling error of +/- 3 percentage points for all registered voters.