Gwen Berry turns away from flag on US Olympic trials podium, says she was 'set up' 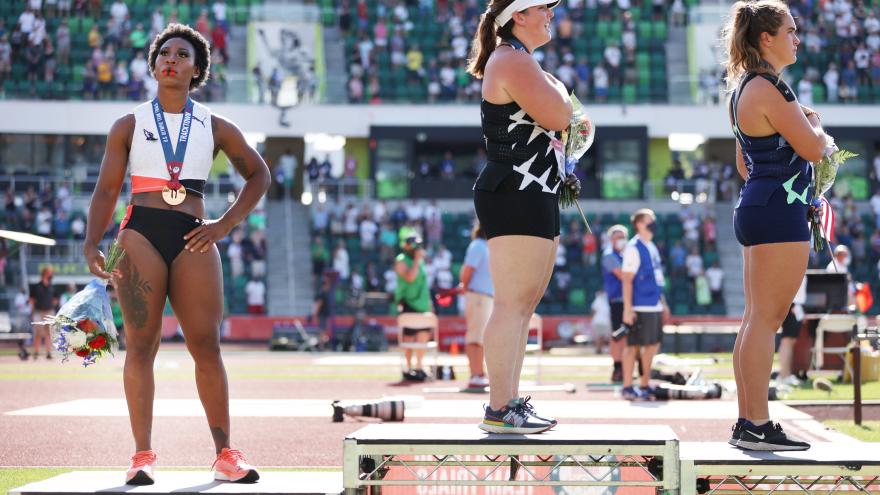 (CNN) -- Hammer thrower Gwen Berry says that the playing of the national anthem while she was on the podium at the US Olympic track and field trials was "set up."

Berry turned away from the flag to face the stands while "The Star-Spangled Banner" played during the medal ceremony on Saturday. She then draped a T-shirt bearing the words "activist athlete" over her head.

Having placed third in the hammer event at the trials in Eugene, Oregon, Berry earned a spot on the US team for the Tokyo Olympics, which get underway next month.

"I feel like it was set up. I feel like they did that on purpose, and I was pissed, to be honest," said Berry of the anthem being played while she was on the podium.

"I was thinking about what should I do. Eventually, I just stayed there and just swayed. I put my shirt over my head. It was real disrespectful. I know they did that on purpose, but it'll be alright. I see what's up."

USA Track and Field (USATF) did not respond to CNN's requests for comment, but according to Reuters, it said the anthem was played each day at the trials according to a pre-arranged schedule.

"We didn't wait until the athletes were on the podium for the hammer throw awards," said USATF spokeswoman Susan Hazzard. "We're thrilled with the women's hammer throw team that selected themselves for the Games."

The anthem has been played once each evening throughout the trials.

"They said they were going to play it before we walked out, then they played it when we were out there,'' said Berry, according to ESPN.

"But I don't really want to talk about the anthem because that's not important. The anthem doesn't speak for me. It never has.''

On Instagram, Berry added a caption alongside photos of her on the podium, saying: "I said what I said... I meant what I said... STOP PLAYING WITH ME!! PERIOD!"

Then on Twitter, Berry said how comments on social media show that "even after the murder of George Floyd and so many others; the commercials, statements, and phony sentiments regarding black lives were just a hoax."

In 2019, Berry lost some of her sponsorships after raising her fist in protest on the podium at the Pan American Games in Peru.

She received a 12-month probation from the US Olympic and Paralympic Committee for the act, which she says was meant to highlight social injustice in America.

"For me, it was extremely devastating because they cut off all my revenue," 31-year-old Berry told CNN of the situation last year.

"Competing, going overseas, going to competitions, getting prize money, and then ultimately making the Olympic team help me, help my family, help my community."

"While we support your right to demonstrate peacefully in support of racial and social justice, we can't control the actions others may take in response," the letter said.

However, a ban on "protests and demonstrations" at the Tokyo Olympics will be in place after the International Olympic Committee (IOC) upheld Rule 50, which states that "no kind of demonstration or political, religious or racial propaganda is permitted in any Olympic sites, venues or other areas."