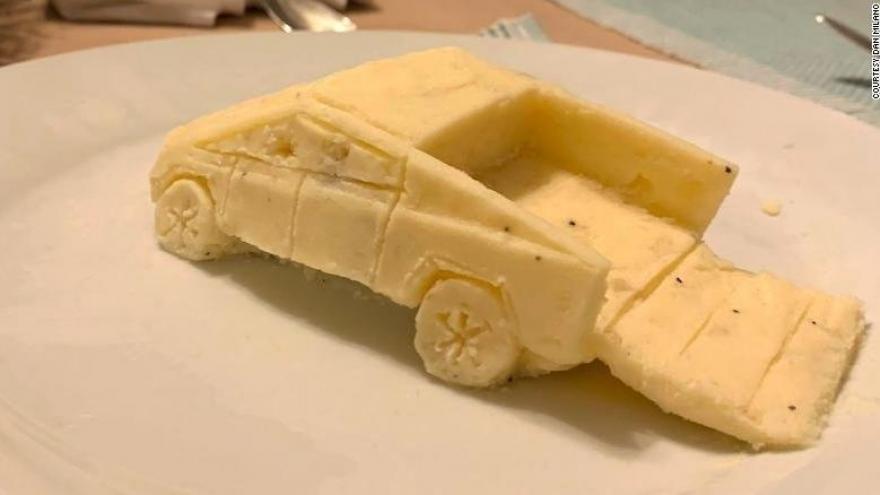 (CNN) -- Greg Milano studied art history and architecture. He has a law degree and works in real estate. But his most important resume line?

This Thanksgiving, Milano, 30, used his spuds to sculpt a perfect, miniature Tesla Cybertruck.

The holiday tradition started 20 years ago when Milano was making volcanoes out of mashed potatoes.

"I am just a big kid," Milano told CNN. "Pablo Picasso summed it up well: 'Every child is an artist. The problem is how to remain an artist once he grows up.' "

Since then, he's created a Pilgrim hat, football, snowman, and more.

"I did a hostess cupcake and Twinkie because they were in bankruptcy," the "mashterpiece" artist said. "White House because it was an election year, the DeLorean from 'Back to the Future' because it was when Marty went to the future, and BB8 when 'Star Wars' came out."

This year, Milano chose to build a Tesla cybertruck after it became the topic of conversation for the technology lovers at his family's Thanksgiving table.

"The hardest part was definitely the geometric lines of the design, keeping the proportions correct, achieving the illusion that it is sitting on four wheels and creating the thin walls of the bed of the truck with the tailgate down," Milano said.

After spending hours carving out windows, tires, and the trunk of the truck, Milano heated up his masterpiece, doused it in gravy, and munched it up.