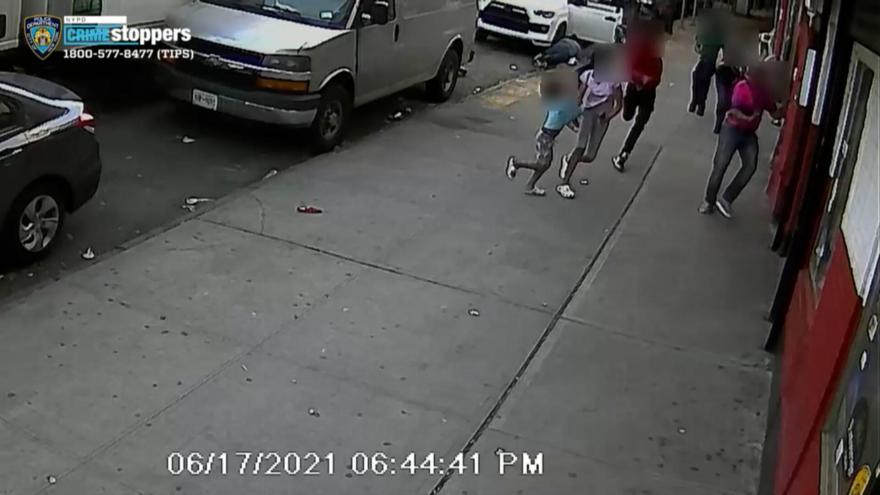 New York City police are looking for two individuals in connection with a brazen daytime assault in which a 24-year-old man was shot next to two children on a Bronx sidewalk on June 17. The two children were not shot and the victim is in stable condition.

(CNN) -- New York City police are looking for two individuals in connection with a brazen daytime assault in which a 24-year-old man was shot next to two children on a Bronx sidewalk on Thursday.

One of the individuals shot the man before fleeing on a scooter operated by the second individual, according to the New York Police Department. The victim was brought to an area hospital and is now in stable condition, the NYPD said.

The two children, a 10-year-old girl and a 5-year-old boy, were not shot and were not brought to the hospital, according to NYPD Detective Arlene Muniz. An NYPD spokesperson told CNN Saturday the children are family members but are not related to the victim.

The shooting appears to be gang-related, police said Saturday.

In surveillance video released by the NYPD, the victim can be seen running down a sidewalk before crashing into the two children and falling to the ground. Other people on the sidewalk are seen running away and into nearby buildings.

The victim and the two children struggle to get up as the gunman, dressed in black clothing and wearing a black facial covering, runs up to them and fires several shots at the victim before running away. The victim was shot in the back and both his legs, according to the NYPD.

Police said the gunman got on the scooter operated by a second individual and they fled the scene.

More than 9,100 people have died from gun violence and there have been more than 280 mass shootings in the US in 2021, according to the Gun Violence Archive.

New York City Democratic mayoral candidate Kathryn Garcia decried the shooting Saturday, saying the "epidemic of guns on our streets is out of control."