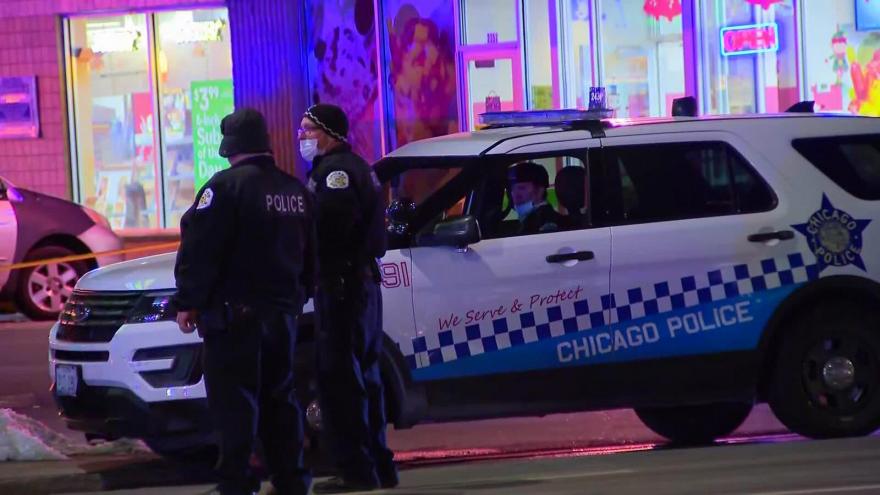 The investigation into the shootings is ongoing, say Chicago police.

(CNN) -- A gunman killed three people and wounded several others in a series of shootings in the Chicago area before being shot and killed by police, authorities said.

Chicago Police Superintendent David Brown said at a news briefing the shootings started in Chicago at 1:50 p.m. (2:50 p.m. ET) Saturday when the suspect -- identified by police as 32-year-old Jason Nightengale -- entered a parking garage and fatally shot a 30-year-old man sitting in his vehicle.

The victim was identified Monday as Yiran Fan, a PhD student from China studying at the University of Chicago.

"This sudden and senseless loss of life causes us indescribable sorrow," university President Robert J. Zimmer and Provost Ka Yee C. Lee said in a statement. "In the days ahead we will come together as a community to mourn, and to lift up fellow members of our community in this difficult and very sad time."

Moments after Fan was shot, the gunman entered the vestibule of an apartment building a few blocks away, police said. He asked to use a phone and fired shots at a building security guard. The woman was shot in the chest and pronounced dead at a hospital a short time later, according to police.

A 77-year-old woman getting her mail in the same building was also shot in the head, officials said. Police said she is currently in critical condition.

A short time later, the suspect went to a nearby building and pulled a gun on a man he knew, police said. The suspect got the man's keys and fled in his vehicle.

Around 3:45 p.m., Brown said the gunman fired shots inside a convenience store after announcing a robbery. A 20-year-old man was shot in the head and pronounced dead a short time later. An 81-year-old woman was shot in the back and neck and is currently in critical condition, according to police.

At approximately 5 p.m., the suspect shot a 15-year-old female in the head as she was traveling in the rear seat of a vehicle being driven by her mother. She is currently in critical condition, police said. The driver was not injured.

Police said that after this shooting, the gunman returned to the convenience store and fired at Chicago police officers investigating the earlier attack, striking a police vehicle. He then traveled to Evanston, located north of Chicago.

Evanston Police Chief Demitrous Cook said Saturday evening that police responded to reports of a man firing shots at a CVS around 5:38 p.m. The gunman, now known by police to be Nightengale, ran across the street to an IHOP restaurant where he took a woman hostage, Cook said, shooting her before fleeing on foot to another business.

Evanston police officers engaged him in the parking lot, where he was killed at the scene, Cook said.

The woman who was held hostage and shot is currently in the hospital, Cook said.

"But for the brave conduct of Evanston police officers confronting this suspect, many more people would have been injured," Brown said, adding that no Chicago officers were known to be injured from their earlier confrontation with the suspect.

Chicago police say the investigation is ongoing. Brown said no motive for the shootings is known at this time.