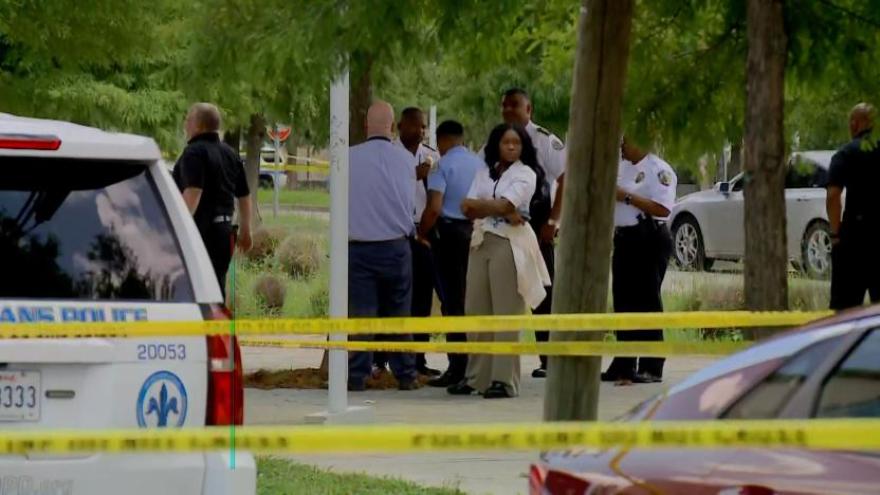 (CNN) -- An 80-year-old woman who was killed in a shooting at a high school graduation ceremony Tuesday on the campus of Xavier University of Louisiana in New Orleans has been identified, officials said.

The woman was identified Thursday as Augustine Greenwood, who died from gunshot wounds, Jason Melancon with the New Orleans Coroner office told CNN. Greenwood had just watched one of her grandchildren graduate, according to CNN affiliate WVUE.

The university was hosting a graduation ceremony for nearby Morris Jeff Community School.

The shooting took place around 11:45 a.m. when NOPD officers working a security detail responded to a call for shots fired in the parking lot of the Xavier University Convocation Center, a NOPD news release said. When officers arrived, they found three gunshot victims -- two men and one woman -- who were all taken to local hospitals. The woman died at a hospital, the release said.

"There was a fight that broke out between apparently two females," said New Orleans Police Department Chief Deputy Superintendent Christopher Goodly. "Subsequent to this fight, subjects produced weapons, and shots were shot."

Multiple people were detained at the scene for questioning, police said. A suspect and motive are still under investigation.

Police said Thursday that no arrests have been made, and the investigation "remains active and ongoing."

Patricia Perkins, head of school for Morris Jeff, said in a statement Tuesday should have been a day of celebration for seniors.

"Morris Jeff is a strong school community and we will unite to help each other heal," Perkins said. "Every day, we teach our children to solve their differences with their words and to be compassionate toward each other. Our graduates will make a difference in this world because they learn to see each other as equal human beings. This resolve is only stronger after today's violence."

"We will remain laser-focused on leveraging local and federal partnerships to prioritize initiatives that address prevention strategies," the mayor's statement read. "However, we also understand that there is a higher degree of personal responsibility that needs to be present in order to de-escalate these situations. As we are seeing all across the country, gun violence is a disease, and the cure requires a collaborative approach involving each of us coming together to make our streets safer."

New Orleans Public Schools Superintendent Henderson Lewis Jr. said in a statement he was "outraged and saddened by the callousness" that took place Tuesday.

"The graduating seniors of Morris Jeff were there to share in their collective achievements and bask in the brightness of their futures, only to have their optimism ripped apart by gun violence," Lewis said. "All our children have a right to be safe and we must do all we can in our power to protect that right. My heart breaks for the families of the victims, and I implore us all to rally around them in their time of need."