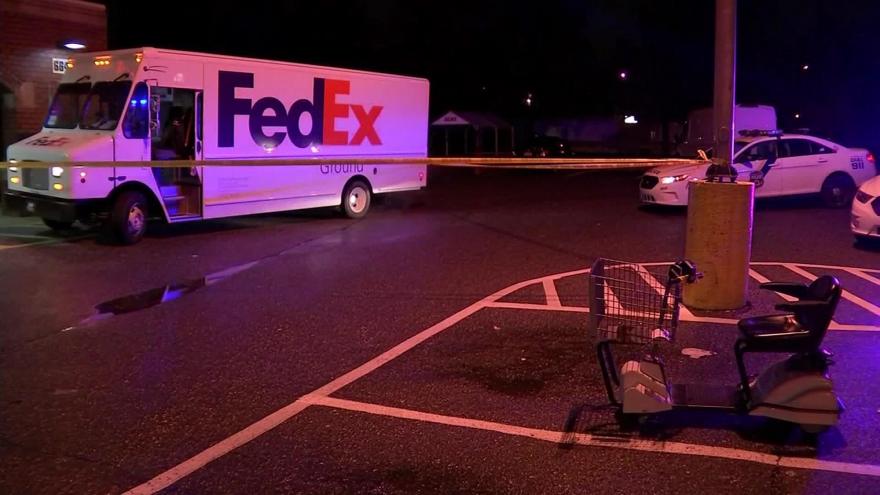 FedEx and the driver are cooperating with investigators, police said.

(CNN) -- The armed robber probably wasn't expecting a fight -- much less to get fatally shot by his victim.

But police say that's what happened in a northeast Philadelphia neighborhood Tuesday evening, CNN affiliate KYW reported. The suspect confronted a FedEx driver who had just dropped off a package.

The driver later told police the suspect robbed him at gunpoint and shot him once in the abdomen, the station reported.

And he shot back.

The FedEx worker then drove himself to a grocery store and told police what happened, WPVI reported.

Police later came upon a 27-year-old man with gunshot wounds they believe was the robber, the station reported. Items from the robbery were found on the suspect, police said.

Police found the man in a driveway with multiple gunshot wounds to the chest, back and torso, KYW reported. He died later at a hospital.

KYW reported that some stolen items were also found in a car near the driveway.

FedEx and the driver are cooperating with investigators, police said.

"The safety of our team members and service providers is a top priority," FedEX said in a statement, according to WPVI.

WPVI said FedEx had not responded to questions about its gun policy for workers.

The FedEx driver was taken to a hospital and was in a stable condition, KYW reported.