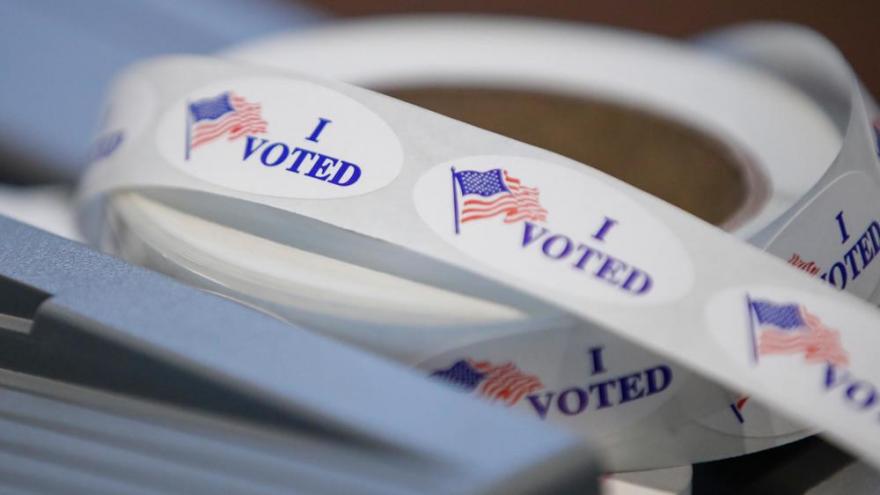 The gun-violence prevention organizations March For Our Lives, Brady and Team Enough launched a joint campaign on July 1, 2020 focused on voting rights in an effort to highlight the link between gun violence prevention and democracy.

(CNN) -- The gun-violence prevention organizations March For Our Lives, Brady and Team Enough launched a joint campaign on Wednesday focused on voting rights in an effort to highlight the link between gun violence prevention and democracy.

The groups are releasing a report, "Accessing Democracy: A Gun Violence Issue," that focuses on four categories: voting by mail and absentee voting, voter registration, early voting, and restoration of voting rights. According to the organizers, the groups are also releasing tool kits aimed at addressing voter access in 10 states the organizers say they believe can enact change: Arizona, Colorado, Florida, Georgia, Michigan, Nevada, North Carolina, Pennsylvania, Texas and Wisconsin.

"It's not just going out and raising your voice, which is so critically important for change, but also voting for change and making sure that happens," Brady President Kris Brown told CNN.

The report and the tool kits will be distributed to hundreds of March For Our Lives, Brady and Team Enough chapters, as well as the groups' network of other gun-violence prevention organizations.

"The communities that shoulder the burden of our nation's flaws have also been historically marginalized and cut out of the democratic process," the report reads. "These communities have been deprived of the avenues of direct democracy most necessary for citizens to have agency in their own future -- their right to vote."

The tool kits will highlight information voters may want ahead of Election Day. Each kit includes polling location and voter registration information, vote-by-mail and absentee voting laws and early voting options, as well as the status of voting rights for citizens with misdemeanor or felony records.

The kits also provide "action plans" for the states. For example, the Arizona tool kit instructs how to contact Gov. Doug Ducey and Secretary of State Katie Hobbs, including directing voters to a landing page that uses the platform FastAction to directly connect citizens to their representatives. There, they can send messages to officials asking for the government to "expand equitable access to voting" and requesting actions including mailing ballots to eligible voters, extending in-person early voting, repealing voter ID laws and supplying personal protective equipment to poll workers.

The Arizona kit also provides citizens with the phone numbers of mayors and city council members in Phoenix, Tucson, Flagstaff and Scottsdale, and suggests that those interested call them to request personal protective equipment for poll workers.

Similar resources and suggestions are in kits for other states' voters.

"When we talk about actions and people getting involved, we're taking a very localized approach in this campaign. ... We're reaching out to folks who live in these states and asking them to advocate for their own states, for their own democracy reform in the place that they live in. And I think that there's a power in that," said Maxwell Frost, national organizing director for March For Our Lives.

The Voting Access Saves Lives initiative comes amid protests and calls for racial justice following the death of George Floyd, a Black man who died in Minnesota after an officer knelt on his neck. The groups emphasize that while gun violence disproportionately affects Black communities, voting rights are often suppressed within those communities too.

"If you're a young person who's been on the front lines and protesting and you clearly care about Black lives and racial justice and long-term outcomes, this work within the political system and fixing some of the historic inequities are also part of achieving that goal, and in fact play a major role in achieving that goal. ... It's the leaders as well, not just the policies, that we're advocating for. We need to make sure that we have the policies in place, the leaders in place," said Crystal Cooper, director of communications at March For Our Lives.

The coalition believes there is a discrepancy between what Americans want and what they get when it comes to policy, in part because of a flawed electoral system and voter suppression. For example, a majority of people support background checks for private gun sales and sales at gun shows, according to the Pew Research Center.

But a bill that would require background checks for all firearms sales -- passed in the House last year -- has stalled in the Senate. The Voting Access Saves Lives coalition says it is committed to ensuring that communities are able to vote for elected officials who represent them and their beliefs in free and fair elections.

"The reality for our cause is that unless we ensure that we truly have free and fair elections, much of the work that we're trying to do will remain stalled in certain places," Brown said.

Through calling for the restoration of voting rights, the coalition aims to make sure all citizens can participate in the electoral process.

"I'm really excited about this campaign personally because it's specific actions that are going to be helping different communities, you know, specifically the Black community, which is obviously the centerpiece of a national and international movement right now," Frost said.

Frost noted that former felons are among those who historically have had their voting rights suppressed. His own experience with the issue came while he was in Florida working for the American Civil Liberties Union during the campaign for a constitutional amendment that would restore voting rights for most previously convicted felons. The amendment passed in November 2018. Before then, more than 1 in 5 Black adults in the state could not vote.

He said he joined the campaign because of his barber, Chris, who had been arrested at 17 and hadn't been able to vote his entire adult life.

"His first voting will be in 2020 because Amendment Four passed," Frost said.

Frost said that during the campaign, he met "returning citizens," people with previous felonies, like his barber.

"I think a lot of people across the nation, as we ask them to get involved, young people -- and older folks as well -- are going to think of their Chris. And think of the person in their lives who they'd like to advocate for," Frost said. "That's why this whole localized approach and calling the specific states, I think, is going to be extremely powerful."