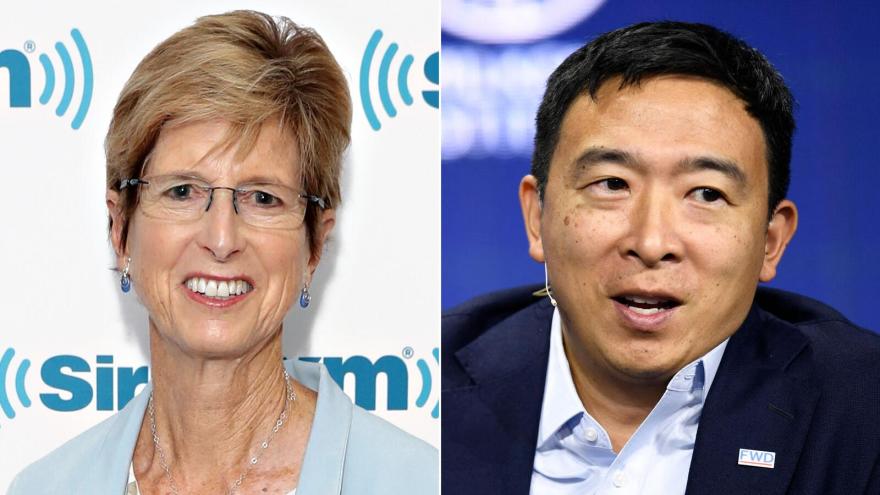 (CNN) -- A group of former Republican and Democratic officials are forming a new political party called Forward, in an attempt to appeal to what they call the "moderate, common-sense majority."

"Political extremism is ripping our nation apart, and the two major parties have failed to remedy the crisis," David Jolly, Christine Todd Whitman and Andrew Yang wrote in a Washington Post op-ed published Wednesday. "Today's outdated parties have failed by catering to the fringes. As a result, most Americans feel they aren't represented."

The group cites issues including guns, climate change and abortion as those that could benefit from a moderate approach. The new party will also advocate ranked-choice voting and open primaries, the end of gerrymandering, and nationwide protection for voting rights.

"Sixty-two percent of Americans now want a third party, a record high, because they can see that our leaders aren't getting it done," Yang told CNN's Brianna Keilar on "New Day" on Thursday in a joint appearance with Whitman. "And when you ask about the policy goals, the fact is the majority of Americans actually agree on really even divisive issues. The most divisive issues of the day like abortion or firearms -- there's actually a commonsense coalition position on these issues and just about every other issue under the sun."

Forward is planning a national convention next summer and will soon seek ballot access to run candidates in 2024, according to the Post op-ed.

The party said in a news release that it would launch "a national building tour this fall to hear from voters and begin laying the groundwork for expanded state-by-state party registration and ballot access, relying on the combined nationwide network of the three organizations." It plans to gain legal recognition "in 15 states by the end of 2022, twice that number in 2023, and in almost all U.S. states by the end of 2024."

While Forward won't be running its own candidates in this year's midterm elections, it will "support select candidates in November who stand up for our democracy, even if they come from outside the new party," according to the news release.

Jolly, Whitman and Yang acknowledged the clear lack of success third parties have had in the United States previously, writing in their op-ed, "Most third parties in U.S. history failed to take off, either because they were ideologically too narrow or the population was uninterested." But they said that "voters are calling for a new party now more than ever," citing a Gallup poll from last year.

"Americans of all stripes -- Democrats, Republicans and independents -- are invited to be a part of the process, without abandoning their existing political affiliations, by joining us to discuss building an optimistic and inclusive home for the politically homeless majority," Jolly, Whitman and Yang wrote.

Asked by Keilar on Thursday why they believe their effort to create a third party would work, Whitman said, "We're in a different time."

"When you have 50% of the American people saying that they are registered independent ... people are sick and tired of what they're seeing in Washington and the fact that nothing major is getting done is frustrating them. We have big problems and we want to see them resolved," she said.

A few independent candidates have earned national attention in their races this cycle. In Utah, Evan McMullin, who ran for president in 2016 as an anti-Trump conservative, is challenging GOP Sen. Mike Lee and has the backing of the state Democratic Party. In Missouri, John Wood, a former senior investigator for the House select committee investigating the January 6, 2021, attack on the US Capitol, is running as a "commonsense alternative" to the field of Republican and Democratic candidates for the state's open US Senate seat. And in Oregon, former state Sen. Betsy Johnson, who left the Democratic Party last year, is a top contender in the open governor's race.

CORRECTION: This story has been corrected to reflect that Andrew Yang has not been elected to office.

This story has also been updated with additional reaction.