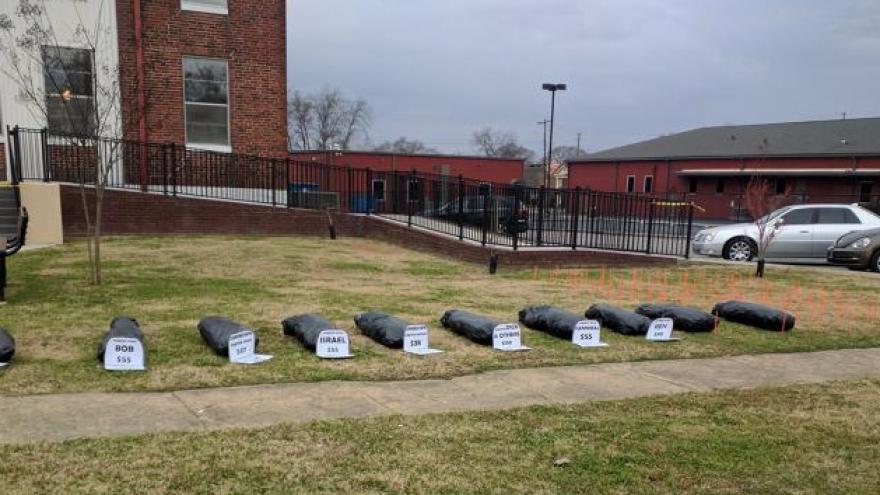 (CNN) -- For months, a group of protesters in Alabama has been fighting for the removal of a Confederate flag and a Confederate monument that sit in front of the Marshall County Courthouse in Albertville.

Dunston -- who has led bi-weekly protests since August -- and two other protesters placed fake slave body bags on the courthouse lawn in order to highlight the history of Marshall County and what the Confederacy supports, she said. The bags, which look like they contain bodies, were made out of garbage bags stuffed with newspapers.

"You have the right to fly the flag at home, on your truck, but it doesn't make sense for these symbols to be at our public courthouses where everybody has to go," Dunston, 24, told CNN. "It's supposed to be a place for justice for all, to have to walk by that courthouse and see those traumatizing symbols of White supremacy, it's not fair."

Each of the 10 bags -- along with 150 wooden dowels -- symbolize the slaves owned by John Marshall, the former US Chief Justice who the county is named after. The bags are marked with the names of the slaves and the price Marshall paid for them.

"I want to emphasize how gruesome and real the institution of slavery was, and how the Confederacy fought to uphold that institution," Dunston said.

"We are trying to move to a more inclusive space and the Confederate flag and the Confederacy was not inclusive. It was hateful and damaging and traumatizing to Black people and really, anyone who wasn't White."

Marshall County leaders have not started a conversation regarding the flag and monument or responded to protesters' demands to remove them, Dunston said.

In October, Hutcheson told WAFF that county leaders are working to build a fence around the monument to protect it from being damaged.

CNN reached out to six county commissioners but did not hear back.

Dunston said she and other protesters have been met with counter-protesters, who are urging the county to allow the courthouse to keep the Confederate monument and flag.

Nancy Horton, a lifetime Guntersville resident, is among the counter-protesters. She said she believes the Confederate symbols should stay "to remind people of the past and go forward."

"I went to school in Guntersville and had many Black friends, I don't have a racist bone in my body but I do have a problem with people trying to change my community because they think a piece of stone is a symbol of racism," Horton, 65, told CNN. "The South is what it is, and removing a statue or a flag is not going to change what happened so many years ago."

Controversial monuments, especially Confederate monuments that have riled some residents for decades, have once again become the subject of nationwide debate following the death of George Floyd in May in Minneapolis.

Some say Confederate monuments mark history and honor heritage. Others argue they are racist symbols of America's dark legacy of slavery.

"My message to Black people is that we will win," Dunston said. "No matter how hard or hopeless these times feel as an activist, we will win because the power belongs to the people and we are stronger together."