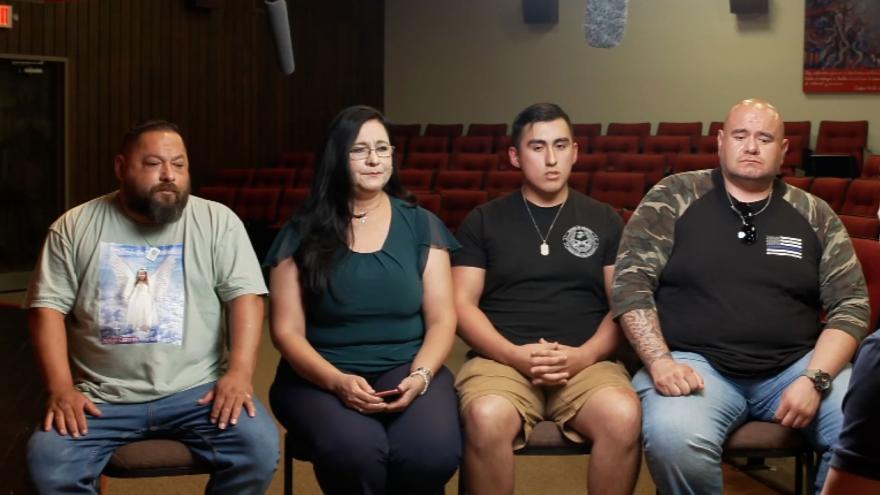 (CNN) -- Every new piece of information about the way officers responded to a school gunman in Uvalde, Texas, is adding to the pain of losing their loved ones, relatives told CNN.

"It was just like putting salt on an open wound," said Velma Duran, sister of murdered teacher Irma Garcia, of this week's assessment of the law enforcement response that revealed an armed police officer had an opportunity to shoot the gunman before he went inside Robb Elementary.

"It's hard to grieve when there's no closure," she said, six weeks after the massacre.

Jacinto Cazares's 9-year-old daughter was also killed. "It makes me sick to my stomach, the policeman having that guy in his sights ... he could have taken that guy down," he said.

"One thing, right there, that could have stopped everything. And it didn't."

And that was just the start of what Duran calls "a tsunami of failures on every agency that was there -- every single one."

Two unlocked doors, a lack of effective command, the positions of officers inside and a loss of momentum after authorities entered the building were other issues highlighted in Wednesday's report from the Advanced Law Enforcement Rapid Response Training (ALERRT) Center, an active shooter and attack response training provider at Texas State University.

The mayor of Uvalde is refuting the assessment of the law enforcement response, saying the new report "does not give a complete and accurate account of what happened."

Mayor Don McLaughlin on Thursday took issue with the first part of the assessment, which said a supervisor of the officer with a rifle who had spotted the gunman either did not hear him or responded too late when asked for permission to fire.

"No Uvalde police department officer saw the shooter on May 24 prior to him entering the school," McLaughlin said in a statement. "No Uvalde police officers had any opportunity to take a shot at the gunman."

There has already been mass criticism of the law enforcement response. Texas Department of Public Safety Director Col. Steven McCraw has said there were enough officers and equipment to stop the gunman three minutes after he entered the school.

Instead it took 74 minutes for law enforcement to confront him, time in which teacher Arnie Reyes, lying in his own blood in Classroom 111, thought he and his students had been forgotten.

The inaction is unfathomable to the families.

"These images that I've seen of all these agencies standing around ... they're under a tree, under the shade drinking water. And in my mind, I'm thinking, are these kids yelling for help? Are they calling for 911? Are there still kids who could have been saved?" said Duran, catching her breath while fighting back tears.

Two family members who are especially critical are Irma Garcia's brother Marcus Lozano, a police officer, and her eldest son Cristian Garcia, who lost his father Joe to a heart attack two days after his mother died.

"The minute I heard that my mom was dead, I yelled out, 'I should have taken that bullet.' I'm in the military. I know what has to be done. I signed up for that ... I told myself if I was in that position, I would've rushed in there and taken a bullet," Garcia said.

"He didn't have body armor. He didn't have a shield. He didn't have backup. They were there. And then they didn't do anything," he continued, speaking of the gunman. "Why did my mom have to go to the door and look death in the freaking eye and try to lock that door?"

Lozano told CNN he was at the first briefing for the families where they were allowed to ask questions and he felt it was like "smoke and mirrors."

"What I was asking them was what were the first responding officers doing, not engaging the shooter? I live in San Antonio. It took me 50 minutes to get from San Antonio to ... Uvalde. They took 77. I drove through five towns and they're telling me they didn't have the fire power," he said.

Lozano blamed "bad police, bad tactics" for the failure to stop the massacre.

"I love my brothers in blue, but it's just like any profession, you know? This profession's not made for everybody," he continued. "It's fine and dandy -- you graduate from the academy, you get the badge, but when it's time to suit up ... you know, stare death in the face, they went weak at the knees."

He accepts some might still have died. "It's a given that my sister [and] Ms. Mireles -- the adults are gonna be the first ... because they pose the biggest threat to him," he said. "But all those babies should never have died."

Garcia wants those he holds responsible to get out of law enforcement. "Those officers that were in those hallways, I want them to resign. All of them," he said.

His aunt, Velma Duran, added, "Or fire them. I wanna know who they are and I want their credentials taken away."

Garcia went on: "My mom protected those kids, but no one protected her. So the whole police department here are cowards."

Cazares breaks down when he compares his daughter, Jackie, to those sent to save her.

"My daughter was a fighter, took a little bullet to the heart and still fought," he said. "She fought hard to stay alive. And these cowards couldn't go in. Who knows how long she was like that? But she had fight in her.

Mayor McLaughlin told CNN he fears there could be a cover-up among law enforcement to try to avoid widespread blame, though both the Texas governor's office and his law enforcement chiefs insisted investigations would continue to get to the truth.

And both Duran and Cazares said they felt sometimes money and politics overshadowed the lives lost.

"We can have safer schools. We can have bulletproof windows. We can have security guards in every entrance or exit point. If there's assault weapons, this is gonna continue. As we've noticed these past couple of days -- it's the assault weapons. So we have to vote these people out because right now it is all about money and their political power."