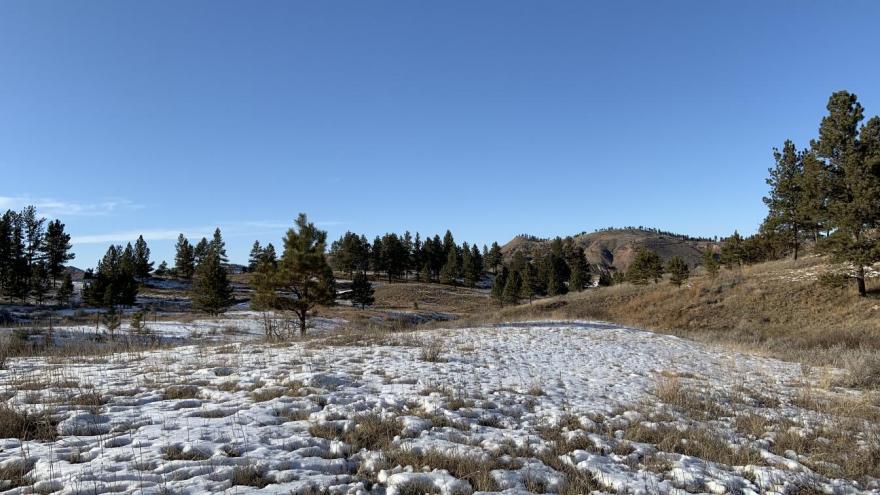 Lame Deer, in the Northern Cheyenne Indian Reservation where Henny Scott lived and was found dead.

(CNN) -- On a cloudy winter afternoon, a few dozen people stand outside the courthouse in Hardin, Montana, holding banners and signs bearing the photos of young Native American women. In below-freezing temperatures and against an abrasive wind, they read out the names of 24 women and girls they say have gone missing or been killed.

They read the names to remember and to honor, but also to shame local, state and federal officials whom they accuse of ignoring their women when perhaps they could have been helped.

Everyone in the group has had a loved one go missing or even found dead. And every one says there has been no help or explanation.

"They didn't make it a priority. They blamed her," says Paula Castro-Stops, mother of 14-year-old Henny Scott, who was found dead of exposure with alcohol in her system, weeks after she went missing.

"They really didn't act on it," Yolanda Fraser says of the disappearance of her granddaughter, Kaysera Stops Pretty Places. "She had just turned 18 a week before, on August 14th. And they said she's probably just out with her friends or whatever."

These families felt driven to set up their own searches, to ask their own questions. And even if they couldn't save their loved ones, they fought to make it different for the next family. Their campaign made it to the desk of the President, and this year, there were finally signs of change.

There's no question that life can be hard for both residents and police in Big Horn County, a little east of Billings, which includes parts of the Crow and Northern Cheyenne Indian Reservations. Law enforcement officials deal daily with a community deep in a substance abuse crisis, still impacted and traumatized by generations of systemic oppression of Native Americans, a crisis that too often manifests as physical and sexual violence that can break up families, research has shown

When called in, the officers face lack of funding and resources for searches across the vast and barren open spaces of eastern Montana.

But native families say those challenges have been used as an excuse for a lack of action. Or worse, that there is something unsolvable about why their women are lost or killed.

"There's a lot of coverage of this issue that describes it as a mystery, like we don't know what's happening," says Annita Lucchesi, a researcher and descendant of the Cheyenne tribe. "As if native women are kind of like a rabbit and a magic act, like we just mysteriously disappear and that's not real."

Native Americans are 6.7% of the population of Montana, yet they make up 26% of missing person reports.

Lucchesi, now studying for a doctorate at the University of Arizona, has collected data the federal government lacks to try to get a database of missing and murdered indigenous cases across the country. She says she has now tabulated more than 4,200 cases dating back to the 1970s for the Sovereign Bodies Institute, where she is executive director.

She says while each case is different, there are common threads, many pointing to centuries of discrimination that still hurt today.

Violence against indigenous women is "a result of colonialism and racism," Lucchesi says. "And how that manifests in the justice system, in law enforcement departments, and even in other systems that contribute to high risk or targeting of native women."

In her database are many instances of officials doing little or nothing when a woman needs help.

One is the case of Henny Scott, an athletic and artistic 14-year-old. When she went missing in the Northern Cheyenne reservation in December 2018, her mother Paula Castro-Stops says she called police and told them where she thought her daughter might be: near a house where other teens were partying that night, not too far from her own home.

But she was told her daughter's case did not qualify for an AMBER alert, and for days no search party was formed by authorities. Castro-Stops and her husband got a group of volunteers together. It was those community volunteers who found the girl weeks later, just a couple of hundred yards from the house Castro-Stops had identified.

Scott had died of hypothermia, but there is much that is still unexplained for her mother, who keeps pottery decorated by her daughter in her living room.

"I think someone was chasing her for her to run this way," Castro-Stops says, pointing toward a ravine in between two foothills. She still doesn't believe there was no foul play, but there are no answers.

It's a similar story for Kaysera Stops Pretty Places, who was 18 when she went missing in August 2019. Five days later, a jogger saw her dead in the backyard of a home in Hardin.

The medical examiner found no evidence of injury or illness but her body was already decomposing when she was found, and death by asphyxia could not be ruled out.

The Big Horn County Sheriff's Office did not return multiple calls and emails asking for comment on its cases. It's unclear whether there was ever a search operation for Stops Pretty Places, according to the family's lawyer, Mary Kathryn Nagle.

For Yolanda Fraser, the grandmother and legal guardian for Stops Pretty Places, there are no answers.

Fraser believes the fact that her granddaughter had gone missing before was a factor in the way law enforcement responded to her disappearance.

"I feel really angry about it. I feel helpless because I can't control anything that they do or decide not to do," Fraser says.

What she and the other grieving relatives found they could do was bind together and force a spotlight on the issue, through social media campaigns, marches and protests.

Now there are three task forces established specifically to look at the issue of missing and murdered indigenous women. President Donald Trump signed an executive order last November setting up a federal interagency task force, and the state of Montana and Big Horn County have their groups, too.

The response to missing women cases is already different, even if the result hasn't changed yet.

When Selena Not Afraid was reported missing on New Year's Day, new plans were put into action. A drone equipped with a camera was flown; so, too, was a helicopter to look for her. The sheriff's department was there, teams of people walking the landscape to try to find her. The FBI showed up, too.

Not Afraid's body was found about a mile from a rest stop between Billings and Hardin, the last place where she had been seen alive.

When the coroner found she had died from hypothermia, it seemed the sheriff's department was ready to close the case. But in another break from the past, the county attorney made it clear the case was open and active.

The task forces and new attention have been welcomed by the indigenous residents of Big Horn County. But for many, there remains a lack of trust in government to work for them.

The community thinks they only got this far by bonding together to scream their outrage. And they believe they will have to continue to use their voice to demand action for -- and maybe save lives of -- their young women.

Lucchesi says she has an aunt who describes the women she is fighting for as warriors. "They gave their lives so that we could fight for a better world here," she says. "And we're here as their helpers, they send us to where we need to go."