As America sees another night of protests and curfews, families of those killed plea for no more violence 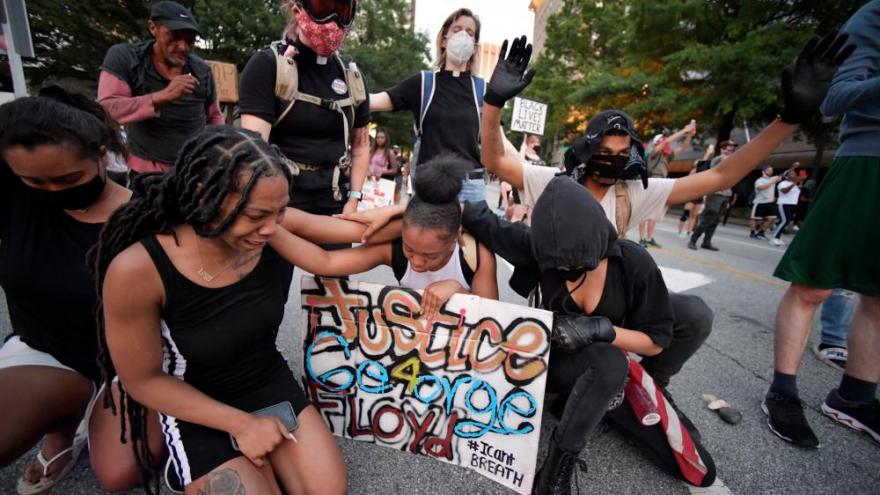 Demonstrators pray during a march, Sunday, May 31, 2020, in Atlanta. Protests continued following the death of George Floyd, who died after being restrained by Minneapolis police officers on May 25.

(CNN) -- On the day the brother of George Floyd and mother of Breonna Taylor called for protesters to abstain from violence, demonstrations continued in the wake of the Floyd's death last week.

Curfews have been announced again in New York, Philadelphia, Washington, Atlanta, Chicago and Los Angeles. Amid the tension and faceoffs were scenes of police officers kneeling with protesters.

• In New York, where there is an 11 p.m. ET curfew, protests have largely remained peaceful, but there have been pockets of looters in Manhattan.

• Across the street from the White House, demonstrators gathered again in Lafayette Square. Video showed heavy smoke from tear gas in the crowd of hundreds of people. Officers, some on horseback, moved protesters off one street ahead of President Trump's walk to a historic church where there was a fire in the basement overnight.

• Before posing for photos in front of St. John's Church, Trump spoke in the Rose Garden, calling himself "your president of law and order" and an ally of all peaceful protesters.

• A large crowd packed the street in front of the Minnesota governor's residence in St. Paul. The group then moved to the state Capitol, about three miles away.

• National Guard troops and Atlanta police officers swept through downtown, pushing out the protesters Monday when a 9 p.m. curfew went into effect. A CNN producer saw protesters hurling projectiles after the curfew came; police responded with tear gas. At least 52 people had been arrested as of 8 p.m. ET, police said.

• Minnesota Attorney General Keith Ellison told CNN's Chris Cuomo that "we plan on taking the proper and deliberate action" against the three officers at the scene of George Floyd's death who were not charged after carefully investigating their behavior. He said "that won't be long from now."

Floyd's death on May 25 was caused by what the police officers did to him, an independent autopsy and attorneys for the family say.

Floyd, 46, died a week ago after a now-fired Minneapolis officer pressed his knee on Floyd's neck for 8 minutes, 46 seconds. His final words included "Mama" and "I can't breathe." A video of the incident shows two other officers helping to hold down Floyd, who was on his stomach and was handcuffed.

Floyd died from "asphyxiation from sustained pressure" -- a finding in the family-commissioned autopsy that is at odds with the medical examiner.

Preliminary autopsy results cited in a criminal complaint last week against one officer said combined effects of being restrained, any potential intoxicants in Floyd's system and his underlying health issues, including heart disease, probably contributed to his death.

But on Monday, the medical examiner's office in Hennepin County released the report that said Floyd's death was a homicide resulting from being restrained.

The brother of George Floyd and mother of Breonna Taylor had a message for people who are bringing violence to peaceful protests: You're doing nothing to help.

Terrence Floyd traveled from New York to Minneapolis to the street where his brother died while being arrested and called on people to stop smashing windows and setting things on fire.

In Louisville, where Taylor was shot in her home by police, her mother, Tamika Palmer, asked for justice while also pleading for calm demonstrations.

The former officer who pinned Floyd to the ground, Derek Chauvin, was initially expected in court Monday. But that appearance has been rescheduled for June 8.

Chauvin is charged with third-degree murder and second-degree manslaughter.

If convicted, he faces up to 25 years in prison on the murder charge and up to 10 years on the manslaughter charge.

23 states have activated the National Guard

More than 17,000 National Guard members across the country are responding to civil disturbances in support of local authorities, a National Guard official said Monday.

At least 23 states and the District of Columbia have activated guard members.

The entire DC National Guard -- about 1,350 members -- was called out Sunday night to assist police with protests in the city after several fires were set, including in a church just blocks from the White House.

An additional 600 to 800 National Guard members from five states have been requested to supplement the DC National Guard, a defense official said Monday.

The FBI and other agencies are tracking groups from both the extreme right and left that are involved in the violence and attacks on police.

Federal law enforcement officials said they're aware of organized groups who are seeking to carry out destruction and violence using the cover of the legitimate protests in Minneapolis and elsewhere.

In the past, some of the groups have been known to organize and travel specifically to confront police and destroy property, federal law enforcement officials said.

Minnesota officials said white supremacists and others were mixing in with legitimate protestors. Authorities there are looking at connections between those arrested and white supremacist organizers who have posted online about coming to Minnesota.

On Sunday, President Trump tweeted that the US will designate Antifa as a terrorist organization -- though experts say that might not be constitutional.

Antifa, short for anti-fascists, describes a broad group of people whose political beliefs lean toward the left -- often the far left -- but do not conform with the Democratic Party platform.

"Many of these professional agitators don't fit a simple left vs right identity," Rubio said. "They are part of a growing anti-government extremist movement. They hate law enforcement & want to tear the whole system down even if it requires a new civil war."'

Correction: An earlier version of this story gave the incorrect number of states where National Guard members are responding to disturbances. It has been updated.