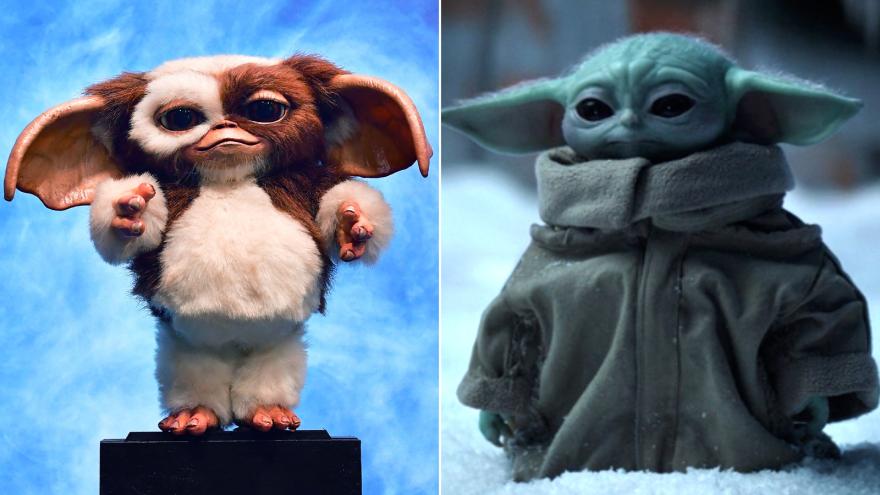 (CNN) -- Before we all fawned over the impossibly cute Grogu/Baby Yoda in the first episode of "The Mandalorian," another big-eared, sweet-natured creature had already weaseled his way into our hearts.

Gizmo the Mogwai, the fuzzy, wide-eyed puppet, is undoubtedly the star of 1984's horror-comedy "Gremlins" and its sequel. And more than 30 years after the original film's debut, "Gremlins" director Joe Dante told the San Francisco Chronicle that he thinks Grogu, whom audiences met in 2019, was entirely based on the lovable Gizmo.

"Baby Yoda ... is completely stolen and just out-and-out copied" from the cutest character in "Gremlins," Dante told the Chronicle ahead of a screening of both "Gremlins" films. "Shamelessly, I would think."

The two aliens certainly share more than a few similarities: Physically, they've both got protruding ears that are disproportionately large to their diminutive frames; they communicate in coos and gurgles and they fiercely defend the father figures in their lives. (It's not clear whether Grogu goes bananas if he's doused with water, though his predecessor Yoda lived on the swampy planet of Dagobah and only went mildly mad, so he may not share this with Gizmo.)

For their part, "The Mandalorian" showrunners have named different inspirations for Grogu than Gizmo, namely "E.T." and the film "Paper Moon," in which a con artist duo play father and child. But fans have noted the resemblance between the two since Grogu debuted.

While Gizmo never achieved the levels of international adoration that Grogu has in a few short years, he's still got devoted fans. "Gremlins" star Zach Galligan told Entertainment Weekly last year that he believed "[his] buddy is cuter," largely due to Gizmo's fuzziness and Grogu's hairlessness.

While Grogu is staying booked and busy in the growing galaxy of Disney+ "Star Wars" series, Gizmo is making a grand return to the screen this year, too: He'll soon appear in animated form on the HBO Max series "Gremlins: Secrets of the Mogwai." Ironically, the new series stars "The Mandalorian" actress Ming-Na Wen, whose character is an ally of a certain tiny green Jedi-in-training.

(CNN and HBO Max are both part of Warner Bros. Discovery.)