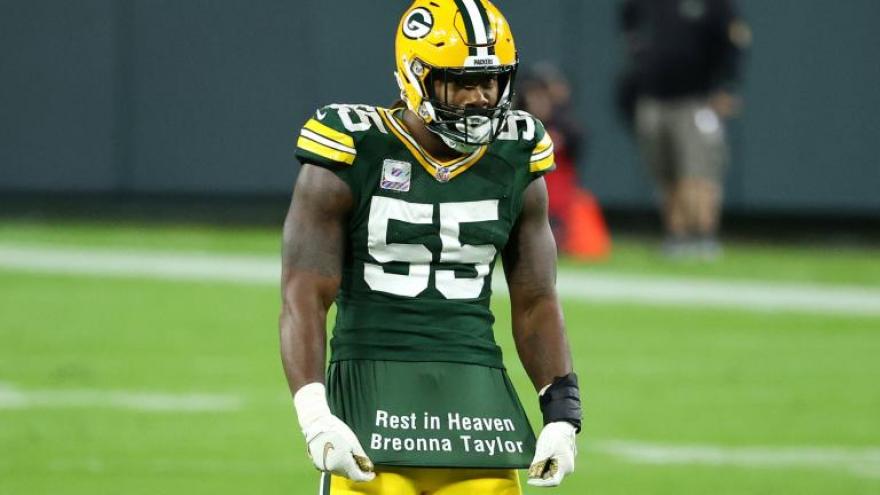 Za'Darius Smith displays the message "Rest in Heaven Breonna Taylor" after getting a sack Monday night at Green Bay's Lambeau Field in Wisconsin.

Smith pulled down his undershirt to reveal the message "Rest in Heaven Breonna Taylor" after sacking Falcons quarterback Matt Ryan in the final seconds of the first half.

Taylor, 26, was shot inside her Louisville, Kentucky, apartment in March by police officers executing a warrant. A grand jury decided not to charge the officers in her death, but former Detective Brett Hankison was indicted last month on three counts of wanton endangerment in the first degree for allegedly firing blindly into Taylor's apartment. He has pleaded not guilty.

Taylor's death has inspired protests around the country and many athletes have expressed disappointment in the grand jury's decision.

Smith has been in the NFL for six seasons and played for the University of Kentucky in college.

After Green Bay's 30-16 victory, Smith told reporters, "With Breonna, it's going to be something every week for me. I feel like in those situations, what's right is not right. But for me, I know tomorrow we are going to do something special for someone. So, hope you guys stay tuned for that."

Smith had three sacks and eight total tackles in the win.