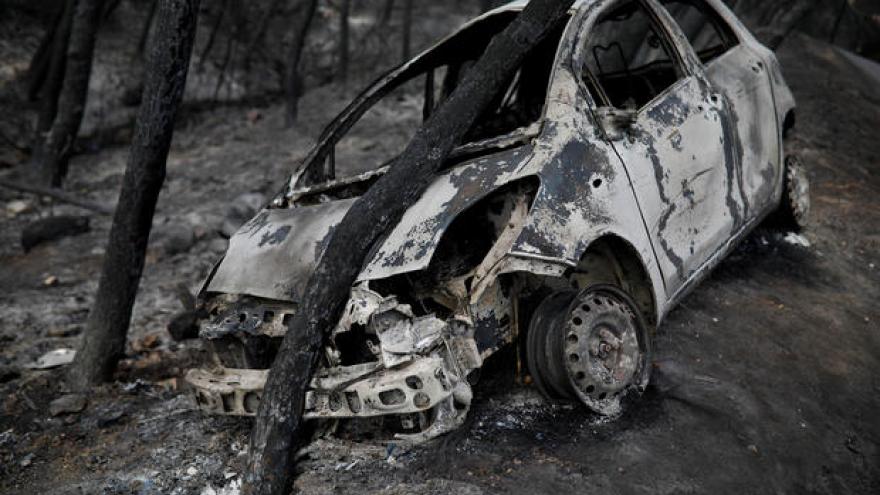 A burned car is stuck under a burned tree following a wildfire in Neos Voutzas, near Athens, Greece, on July 26, 2018. REUTERS VIA CBS NEWS

ATHENS, Greece (AP) — Greek authorities said Thursday there were serious indications that a deadly wildfire that gutted a vacation resort near Athens was started deliberately, while experts warned that the devastated coastal town had been built like a "fire trap," with poor safety standards and few escape routes.

The death toll from Monday's blaze east of the Greek capital rose to 82 as rescuers and divers continued to search for more bodies in burnt-out homes and at sea, where hundreds fled to try to escape the inferno.

Public Order Minister Nikos Toskas said satellite image analysis of the deadly fire and a second blaze that broke out Monday on the other side of the city indicated both had been set in multiple places within a short time frame.

"We have serious indications and significant findings of criminal activity concerning arson," Toskas said. "We are troubled by many factors, and there have been physical findings that are the subject of an investigation."

He declined to provide more details.

U.S. military officials told The Associated Press Wednesday that they had been helping Greece gather images of the fire-ravaged areas with combat drones and Navy surveillance aircraft.

Fires near populated areas in Greece are often blamed on arsonists believed to be targeting forest land for development, but arrests are rare.

Most casualties were found at Mati, some 30 kilometers (18 miles) east of Athens, a small seaside resort filled with summer homes and apartments owned by retirees. A group of experts from the University of Athens' Faculty of Geology and Geo-environment said the layout of the resort had acted like a "fire trap" with access to the sea hampered by cliffs, and homes built in wooded areas with little provision for fire safety.

The study also noted that the resort had narrow roads, numerous dead-ends, and was poorly sign-posted, meaning visitors could not easily reach a nearby main road.

Messages of support continued to come in on social media and in letters to the Greek government. They included a letter from Britain's Queen Elizabeth and an Instagram post from Brazilian soccer legend Ronaldinho, showing him pictured in prayer with a comment in Greek that read: "I'm hurting for Greece and Athens. Courage Greek bothers, my thoughts and prayers are with you."

Authorities, meanwhile, were still struggling with the identification of charred bodies. Germany's federal criminal police said a team of its forensics specialists was in Greece to help authorities identify the dead. The team members have worked on major disasters, including the 2004 Asian tsunami and a 2002 mid-air collision of a Russian charter flight and a DHL cargo plane over southern Germany that killed 71 people.

At a morgue in Athens where identification efforts were centered, relatives were informed about the steps needed to match the bodies held there to a missing person, including providing DNA samples and dental records.

"The procedure is difficult, harder than that of other mass disasters which we have dealt with in the past as a forensics department," coroner Nikolaos Kalogrias said. "Here, the main cause of death was burning, in most cases the complete burning (of the body), so identification is very difficult."

Thanassis Moraitis went to the morgue searching for his 90-year-old mother.

He had tried to drive away with his mother, wife and 19-year-old son, but the fire was moving too fast. They had to abandon the car and started running to the beach and into the water. Moraitis suffered burns to his leg from the extreme heat; his mother didn't make it.

"In the sea, there was a rain of fire, there was smoke, there was a Force 12 wind," the 53-year-old Moraitis said, adding that boats rescued him, his wife and son after about three hours.

"I didn't even get a chance to say goodbye to my mother."