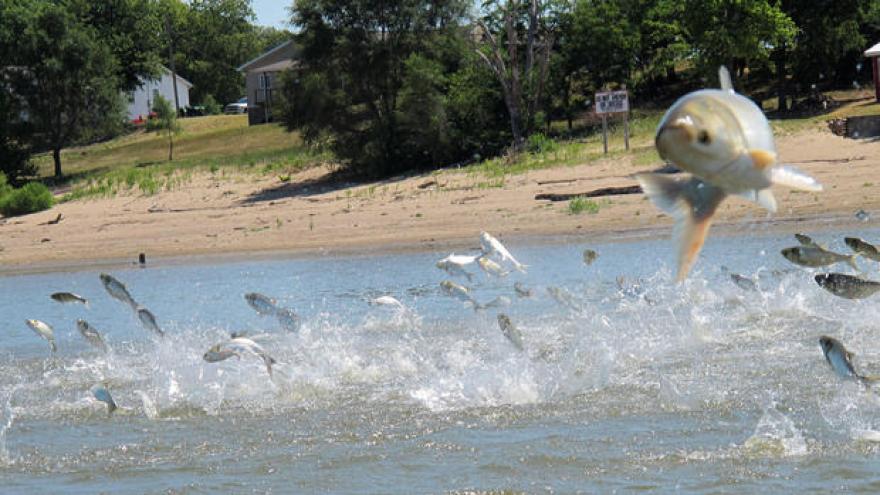 Representatives of the eight states and two Canadian provinces within the Great Lakes and St. Lawrence River watershed are scheduled to gather July 16-17 in Chicago, where they will discuss a plan devised the U.S. Army Corps of Engineers for halting the invasive fish.

It proposes fortifying the Brandon Road Lock and Dam near Joliet, Illinois, with devices such as loudspeakers, electric cables and air bubble curtains. The location on the Des Plaines River is a choke point in a network of rivers and canals between Lake Michigan and the Illinois River, which the aggressive carp have overrun.

"We need to move quickly," Michigan Gov. Gretchen Whitmer said during the Great Lakes-St. Lawrenece Collaborative, a conference of the region's governors and premiers meeting in Milwaukee, adding that the lakes would pay "an enormous price" if the carp breach defenses and become established in the lakes. "We have to make sure we have a barrier that is impenetrable."

Scientists say the carp could out-compete native fish and upend the aquatic ecosystem by gobbling up tiny plants and animals at the base of food chains.

The Great Lakes states at times have been at odds over how to block the carps' path, even battling in court over whether to build structures that would seal off Lake Michigan from infested waters downstream. Ohio Gov. Mike DeWine said at the gathering Friday he still prefers physical separation, which Illinois opposes, contending it would disrupt commercial vessel traffic on the busy waterway.

The Brandon Road upgrade is considered a compromise that would buy time to seek more comprehensive solutions, although it wouldn't happen quickly: The target date for completion is March 2027.

A potential hang-up is the price tag, which the Army Corps estimates at $778 million to $832 million, depending on the installation timetable. The Corps generally requires non-federal partners to pay 35 percent of a project's construction costs.

Illinois has agreed to be non-federal sponsor, at least during the design and preconstruction phase. But Gov. J.B. Pritzker has said he wants neighboring states to pitch in.

The July meeting will be crucial in determining whether there is region-wide support for the Brandon Road plan, said Loren Wobig, water resources director for the Illinois Department of Natural Resources.

"We don't want to agree to something with the Corps and have another state come and sue because they disagree with that," Wobig said, adding that he was optimistic about prospects for a deal. "I don't think there's any disagreement about wanting to move forward with doing something" at Brandon Road.

Michigan has offered to contribute $8 million of the costs for the preconstruction phase, estimated at $29 million over three years.

Wisconsin Gov. Tony Evers said he was looking forward to the Chicago meeting.

"Certainly Wisconsin has a lot to lose by not discussing this issue head-on," he said.

Environmental groups urged the states to cooperate on Brandon Road.

"We've got a plan that's been through the wringer repeatedly and been sent to Congress," said Joel Brammeier of the Alliance for the Great Lakes. "I hope the states sit in that room and move forward in unison."

During their Milwaukee conference, the governors and premiers group also endorsed a series of steps to protect the region's environment and boost economic growth.

They included a pledge of cooperation on dealing with water contaminants such as lead and toxic chemicals known as PFAS; a marketing initiative to boost the regional cruising industry; support for federal funding of a new navigational lock at Sault Ste. Marie, Michigan; efforts to double maritime trade with Europe; and boosting private investment in environmental improvements.