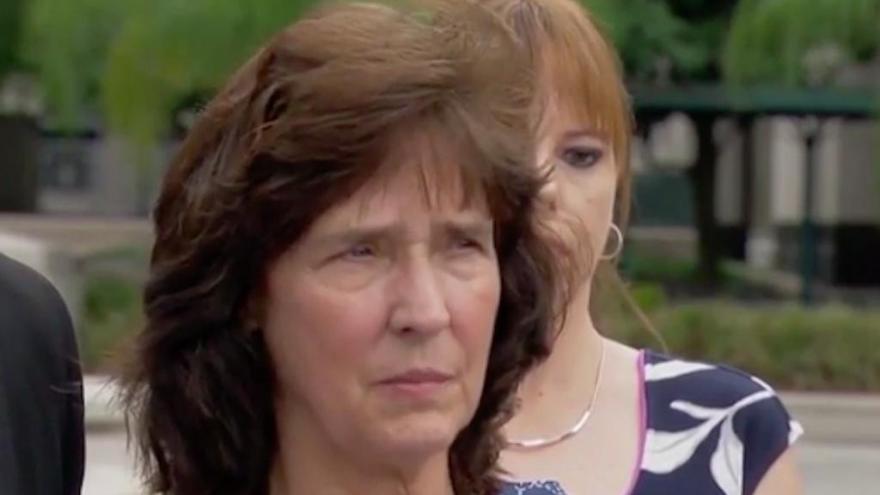 Attorney Ben Crump has filed a civil lawsuit against several entities on behalf of Hester Burkhalter, a 69-year-old White woman from Hickory, North Carolina, and her family. Crump said she "was wrongfully arrested and taken into custody at Walt Disney World in Orlando, Florida, for possessing federally legal CBD oil" in 2019.

(CNN) -- Attorney Ben Crump has filed a civil lawsuit against several entities including, The Walt Disney Co. and the Orange County Sheriff, on behalf of Hester Burkhalter, a 69-year-old White woman from Hickory, North Carolina, and her family.

Crump said she "was wrongfully arrested and taken into custody at Walt Disney World in Orlando, Florida, for possessing federally legal CBD oil" in 2019.

CBD is a natural anti-inflammatory derived from the cannabis plant.

According to Crump and a July 29 complaint, a lawsuit has been filed in the Circuit Court of the 9th Judicial Circuit in Orange County against The Walt Disney Company and a number of its executives as well as the Orange County Sheriff and a number of its deputies alleging illegal detention, false arrest and violation of civil rights. The suit requests $6 million in compensatory damages and $12 million in punitive damages for Burkhalter, as well as millions of additional dollars for her family, according to the complaint.

"The Orange County Sheriff's Office has not been served with a lawsuit, but in any case, we don't comment on possible pending litigation," it said in an email to CNN on Wednesday.

CNN has reached out to The Walt Disney Co. and has not heard back.

"Defendants Disney and uniformed local law enforcement officials acting at its direction and under its authority as a Florida landowner ... arrested and detained, processed as a narcotics felon and strip-searched a harmless, entirely blameless American great-grandmother, whose only 'crime' was her desire to lessen crippling osteoarthritic pain with a doctor-recommended hemp-based oil, while giving her family, including a disabled adult daughter and two adopted pre-teen children, an enjoyable vacation at the 'Disney World's entertainment complex near Orlando," a complaint filed July 29 reads. "The disgraceful events that animate this lawsuit 'pull back the curtain' on the casual cruelty and unpardonable ineptitude that lie at Disney's cold corporate heart."

According to accounts from Crump and Burkhalter during the news conference and the complaint, Burkhalter traveled with her husband, daughter, and two adopted children, ages 8 and 10, from Hickory to visit Walt Disney World last year, a trip Crump said Burkhalter had spent over two years saving up for. After spending April 14 at various Disney parks, the family arrived at the Magic Kingdom on April 15 where the complaint says Burkhalter was asked to remove the contents of her bag while going through security. According to Crump, Burkhalter opened her bag and placed her belongings, which included a one ounce container of CBD oil, into a security bin.

During the press conference, Burkhalter told security agents she used CBD oil to treat advanced arthritis per her doctor's recommendation. When asked if her substance contained THC, Burkhalter said she did not know, although the bottle read 0% THC, according to the complaint.

A sheriff's deputy then tested the substance twice, getting a negative result the first time and positive result the second time, according to the complaint.

According to Crump and the complaint, Burkhalter was then separated from her family and placed under arrest for felony drug possession. She was subjected to drug sniffing dogs, vomited during transport, and requested and was denied medical care, the complaint alleges. When Burkhalter arrived at the detention facility, she had her mug shot taken and was then escorted to an adjacent room "where she was instructed by other officers to strip naked and to 'bend over' for a body cavity search," according to the complaint.

"It was the most humiliating day of my life," Burkhalter said during Wednesday's news conference.

Crump, who is representing the family of George Floyd, a Black man killed by police in Minneapolis, in a separate lawsuit, brought up Floyd's verbalized anxiety as police officers tried to force him into the back of the car shortly before his death. Burkhalter said she too told police officers that she could not breathe.

"I even told them that I could not breathe before I finally got out," Burkhalter said. "I felt like I was going to pass out and I started throwing up and the only comment was that one officer who said, 'She's throwing up,' like it was no big deal. I don't understand it."

Crump said they have asked Disney for an apology which, according to Crump, it has not given. Crump said the Orange County Sheriff's Office has been mostly silent except in trying to "defend their indefensible actions."

Burkhalter's son posted bail on April 15, 2019, and she was released shortly after midnight, ending a nearly 15-hour "ordeal," according to the complaint. The Burkhalters were then told if they tried to go back on Disney property, they would be arrested for trespassing, a restriction lifted in a May 9, 2019 letter to her attorneys from Disney security, according to information disclosed during the news conference.