'Grandmother of Juneteenth' celebrates federal holiday -- but there is more work to do. Here's how you can help 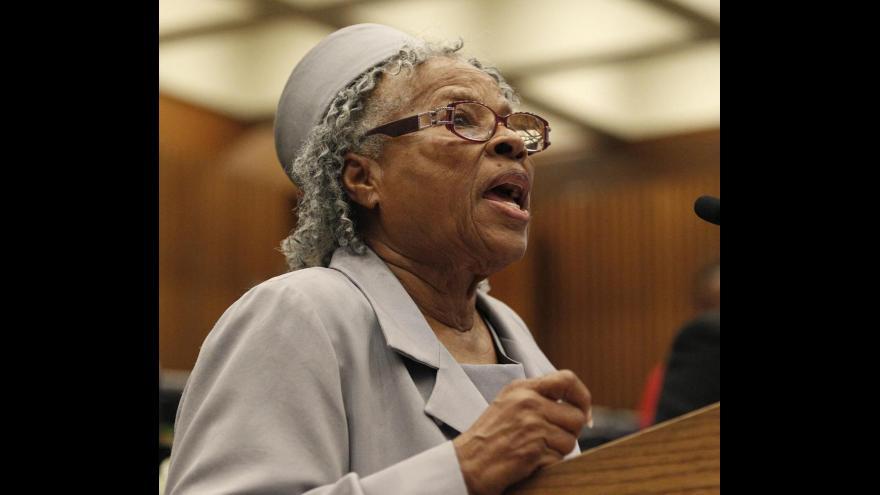 When Opal Lee was nine years old, a mob burned her home a week after her family moved into a White neighborhood.

(CNN) -- Before Juneteenth became an official federal holiday, 94-year-old Opal Lee was on a mission.

"I'm not just going to sit and rock, you know?" the determined "Grandmother of Juneteenth" told CNN. "The Lord is going to have to catch me."

Days later, the spirited nonagenarian shouted with delight as she watched Congress pass a bill to make Juneteenth -- June 19 -- a nationwide holiday commemorating the end of slavery.

"I've got so many different feelings all gurgling up here -- I don't know what to call them all," she told CNN affiliate KTVT in Fort Worth, Texas, where she lives.

Right now she plans to savor the moment. But the woman who spent years fighting for Juneteenth stresses the work that's left to do to push back against racism.

"We've got all of these disparities that we've got to address and I mean all of them. While we've got some momentum I hope we can get some of it done. We can have one America if we try," she told KTVT.

A child stung by racism

As a little girl, Lee was the victim of a traumatic event, her first undeniable experience with racism.

One week after nine-year-old Lee moved with her family to an all-White neighborhood, a mob surrounded their home and threatened their lives.

"My dad came with a gun and the police told him if he busted a cap, they would let the mob have us," she recalls.

Lee's parents sent her to friends several blocks away "under the cover of darkness," she tells CNN.

"They burned furniture. They set the house on fire. It was terrible. It really was."

Lee says outside newspapers in Texas reported the crime -- but local papers from the community where the violence took place ignored it.

The date of the attack was Juneteenth.

Lee says her parents never spoke of the incident again.

"They buckled down, they worked hard. They bought another home, but we never discussed it," she explains.

"I just know if we had had an opportunity to stay a while they would have found out ... we were just like them."

"We wanted the same thing they wanted. A place to live," she recalls.

"We wanted food, jobs that would pay a wage."

Lee was 89-years-old when she decided "something can be done" to make Juneteenth a formal and nationally recognized holiday. She grew up celebrating the holiday in Marshall, Texas, and says the special day felt like Christmas.

"We would go to a place called 'the fairgrounds' and there would be baseball games and food," she recalls.

But, it wasn't until adulthood that Lee learned the true significance of the day with the help of a mentor. As an educator for more than twenty-five years, she helped organize citywide Juneteenth festivals that she says boasted thousands in attendance.

"It was pure festival. I mean we even took exhibits from the historical society to the park," she shared.

On one occasion, Lee says the park hosting the event closed at 10 p.m. But instead of shutting down the festivities, she found a way to keep the lights on and the celebration going.

"I got on a flatbed truck, stuck the light thing back in -- We had festival until dawn," Lee laughs.

In 2016, the activist turned her focus nationally. The great-great-grandmother mobilized a team, launched an online petition and pledged to walk 1,400 miles from her Texas home to Washington, DC. Lee was dead-serious about lacing up her shoes and making the trek.

Undeterred, she logged almost 300 miles on foot for the cause and continued to push her movement to appear across the country.

Honor the enslaved. Educate the future

For Lee, Juneteenth is a celebration of freedom. In honor of the day, the Texas native hosted annual 2.5-mile walks to commemorate the seldom told history of some 250,000 enslaved people in Galveston, Texas, who did not learn of their freedom until two and half years after the Emancipation Proclamation.

"I am adamant that the schools teach the truth," she exclaims.

As a former educator whose job involved social work, Lee now strives to ensure future generations know about Juneteenth. She authored a children's book entitled, "Juneteenth: A Children's Story" which is available for purchase on Amazon.

Before President Biden signed the bill making Juneteenth a federal holiday, 49 states had already recognized the day. But for Opal Lee, federal recognition is a crucial milepost on a mission that she insists is far from over.

"... I want so much for my family and so I think I can do something about it before I go."

In honor of Juneteenth, there are a number of organizations you can work with to advance justice and continue the fight toward racial equity.

You can honor Juneteenth and amplify its importance in your own community with any of the following organizations and virtual opportunities.