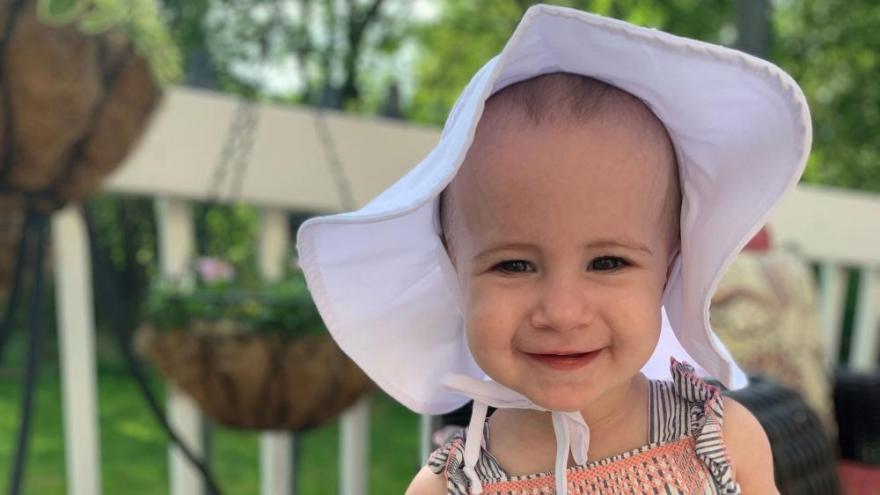 This is not "like the Michael Jackson story, where he was dangling the child out the window," said the attorney for the family whose toddler fell to her death from a cruise ship window this weekend.

(CNN) -- This is not "like the Michael Jackson story, where he was dangling the child out the window," said the attorney for the family whose toddler fell to her death from a cruise ship window this weekend.

The grandfather of 18-month old Chloe Wiegand didn't dangle and drop her -- she fell because an open glass pane should have been closed securely, said attorney Michael Winkleman at a news conference on Tuesday.

Chloe fell to her death from deck 11 of a Royal Caribbean cruise ship, Freedom of the Seas, while it was docked in San Juan, Puerto Rico, on Sunday, according to José Carmona, a spokesman for the local Port Authority. Chloe is the child of South Bend Police Officer Alan Wiegand, according to the Indiana police department, and Kimberly Wiegand. Chloe had traveled to San Juan from the mainland with her parents, siblings and four grandparents.

Winkleman said he was retained by the family on Monday to "set the record straight." As he describes it, the toddler's tragic death is unlike many of the original reports circling the internet.

Chloe and her grandfather, Sam Anello, were "in the water park on the ship, which is designed for the kids -- kids are meant to be there," said Winkleman. "And there's a whole wall of windows. And the grandfather thought that this window was closed. It turns out, we've come to learn, that ... passengers can open these windows."

The family's attorney's statement differs from Carmona's official comments on the incident, which indicated the girl and her grandfather were "in a dining hall on deck 11."

Winkleman said, "You have a wall of windows with one hidden hole." Unknowingly, then, the grandfather places Chloe on the wood railing before the wall of windows, believing Chloe will bang on the glass just like she does at her brother's hockey games, "and the next thing he knows, she's gone," said the attorney.

After speaking with the grandfather, who was "crying hysterically," Winkleman said he believes that this was a "preventable incident."

No alcohol was involved, added Winkleman.

Royal Caribbean Cruises said in a statement Monday that it does not plan to comment further on the incident out of respect for the family's privacy: "We are deeply saddened by yesterday's tragic incident, and our hearts go out to the family. We've made our Care Team available to assist the family with any resources they need."

CNN reached out Tuesday to Royal Caribbean and the Puerto Rico Ports Authority for comment on Winkleman's statements. The island's Department of Public Safety said that officials are investigating the death.

Winkleman noted that the Freedom of the Seas ship, which made its maiden voyage in 2006, is older, and none of the newer ships have similar windows that can be opened in the same way.

"I think Royal Caribbean needs to answer these questions: Why would you ever in a kid's play area put windows that passengers can open? I mean, we've all had that experience where someone walks into a glass sliding door thinking it's not there. This is the inverse of that. It was reasonable for Sam the grandfather to think that this was all glass because from his perspective it was all glass."

Winkleman is hoping to gain access to the ship and to surveillance footage of the incident.

"In my view in incidents like this, the video is always key," he said.

Meanwhile, the family remains in Puerto Rico, waiting for the authorities to release the body of their daughter and for the police to conclude due diligence on the investigation, he said.

Elmer L. Román González, secretary of the Department of Public Safety in San Juan, told CNN that the autopsy was completed Monday and on Tuesday morning "the body was delivered to the funeral home chosen by the family."

Ultimately, the family does not want this incident to be "just about tragedy," said their attorney, who described Chloe as "a sweet, loving girl." Instead, the Wiegands are hoping to make sure something like this never happens to another family.

"I do think that there is going to be blame and significant blame on the cruise line," said Winkleman. "I will do everything I can to hold them accountable for what appears to me to be negligence."