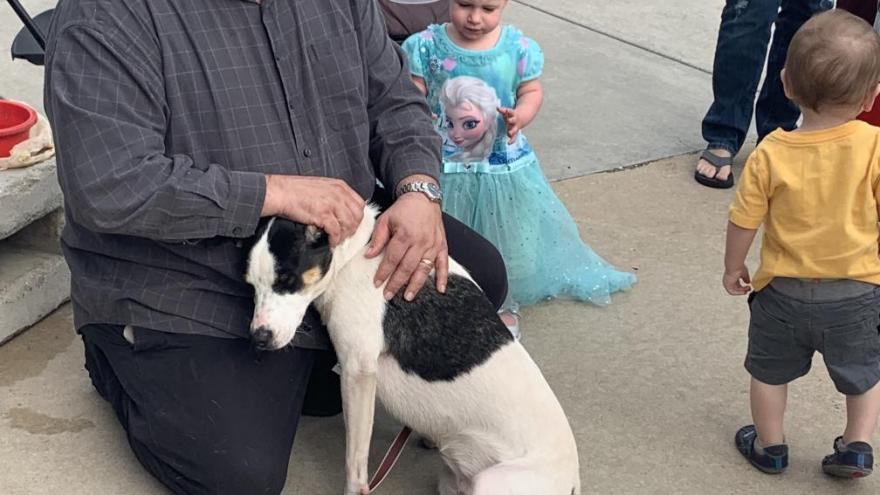 In July, Salvatore "Sam" Anello was playing with his 18-month old granddaughter, Chloe Wiegand, on the 11th floor near an open window while the ship was docked in Puerto Rico.

(CNN) -- The man who was holding his young granddaughter when she slipped out of his grasp and fell to her death from a Royal Caribbean cruise ship said he thought there was glass in the window where they were standing. "It's like it disappeared. It's like the glass disappeared."

In July, Salvatore "Sam" Anello was playing with his 18-month old granddaughter, Chloe Wiegand, on the 11th floor near an open window while the ship was docked in Puerto Rico.

"I bent down by her. We always, like, whenever you're at hockey games, we would bang on the glass, and it was fun, you know," Anello said in an exclusive interview with CBS News. "So, when I knelt down to be with her at that level, I couldn't reach the glass really, only with my fingertips so I knew she couldn't. So that's when I decided I'd pick her up. So, I was trying to stand her on the railing, and it happened in seconds."

The details of the toddler's death have been disputed since the accident. Port Authority officials said Anello sat the girl in the window and lost his balance, and the girl fell to her death.

Michael Winkleman, the attorney who represents Chloe's family but does not represent Anello in his criminal case, said the toddler loved glass and windows, and her grandfather had placed her on a ledge by a glass wall, but had no idea one window was open.

With one arm hooked around her, Anello said he was leaning forward to knock on the glass with his other arm, "I think that's the point where she -- slipped out of me."

CBS said Winkleman showed its reporters video of the incident.

"The video shown to us was not in real time," correspondent David Begnaud said. The family attorney "says the video that he showed us was the same format he received from prosecutors," Begnaud added.

Noting a discrepancy in how long Anello was holding Chloe, Begnaud said, "the grandfather actually looks out the window for about eight seconds. He reaches down, he picks Chloe up, and he holds her over the railing for nearly 25 seconds."

In a statement to CBS News, Winkleman said, "any variation in time likely has to do with software issues. Most importantly, whether it was 5, 10, or 30 seconds does nothing to change the fact that Sam reasonably believed the window was closed."

Anello said he would never have risked his granddaughter's life.

"Not knowing that there wasn't a glass there, if somehow I thought that she was going beyond the glass, I wouldn't have done it. I would have been appalled. I wouldn't mess around with Chloe in that kind -- or anybody -- with that dangerous kind of -- never. Never."

Anello mentioned he is color blind and that could have played a role in why he didn't see that the tinted glass was open.

Chloe's mother, Kimberly Wiegand, says she blames the cruise company for the incident and wants it to be held accountable in court.

"This cannot happen to another family," she said.

In a statement shortly after the incident, Royal Caribbean Cruises said the company was "deeply saddened by this incident, and our hearts go out to the family."

"We have assisted the authorities in San Juan with their inquiries, and they are the appropriate people to address further questions," the statement said.

Initially, Anello said he blamed himself.

In October, Anello was charged with negligent homicide in his granddaughter's death, Puerto Rican authorities said.

"There's nothing worse that they can do to me than what's already happened," he said, fighting through tears. "Chloe being gone is the worst thing ever, so I'm like, whatever, you know."

He remembered his granddaughter as "such a beautiful little girl. Perfect little girl. Smart, smart little girl, that everybody should have been able to know."

Anello is due back in court in December in Puerto Rico.