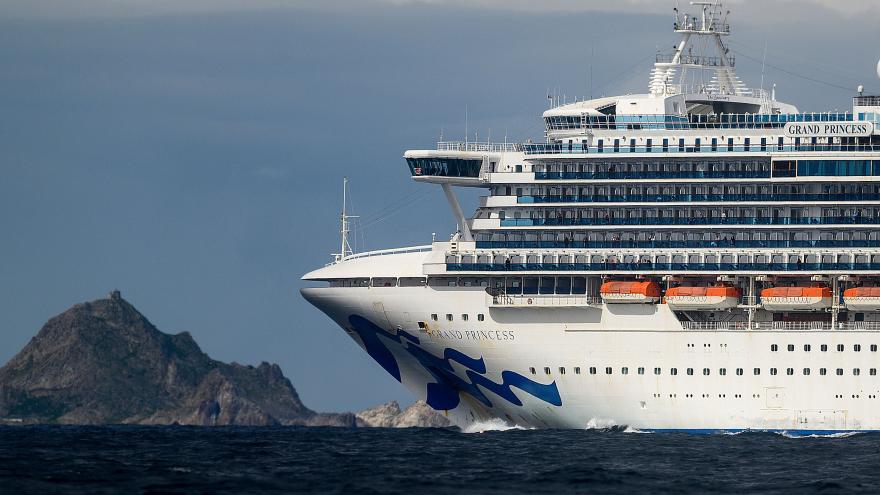 (CNN) -- A cruise ship carrying at least 21 people who have tested positive for the novel coronavirus is scheduled to arrive to a California port at noon Monday after being held at sea for several days as cases of the virus spiked across the United States.

The Grand Princess approaches the United States as the number of coronavirus cases in the country multiplied threefold since Friday morning, to more than 500, health officials said.

The ship is scheduled to arrive to the Port of Oakland at noon (3 p.m. ET) on Monday, said port spokesman Mike Zampa. Aerial footage from CNN affiliate KGO showed workers removing parts from a tractor trailer and constructing large, beige tents on the dock. Supplies sat on pallets nearby.

6 questions from the weekend answered

Disembarking the thousands of people on board the ship will be a "multiple day process," Princess Cruises, which operates the vessel, said in a statement Sunday.

Evacuating the ship will require a step-by-step approach prioritizing the most vulnerable among the ship's more than 3,500 passengers and crew, said Dr. Anthony Fauci, director of the National Institute of Allergy and Infectious Diseases.

Teresa Johnson and her husband are aboard the ship celebrating their 27th wedding anniversary, and they've been fortunate because they have a larger cabin with a balcony and have been able to enjoy fresh air more than other passengers, she told CNN in a phone interview. They've been watching Marvel movies to pass the time. 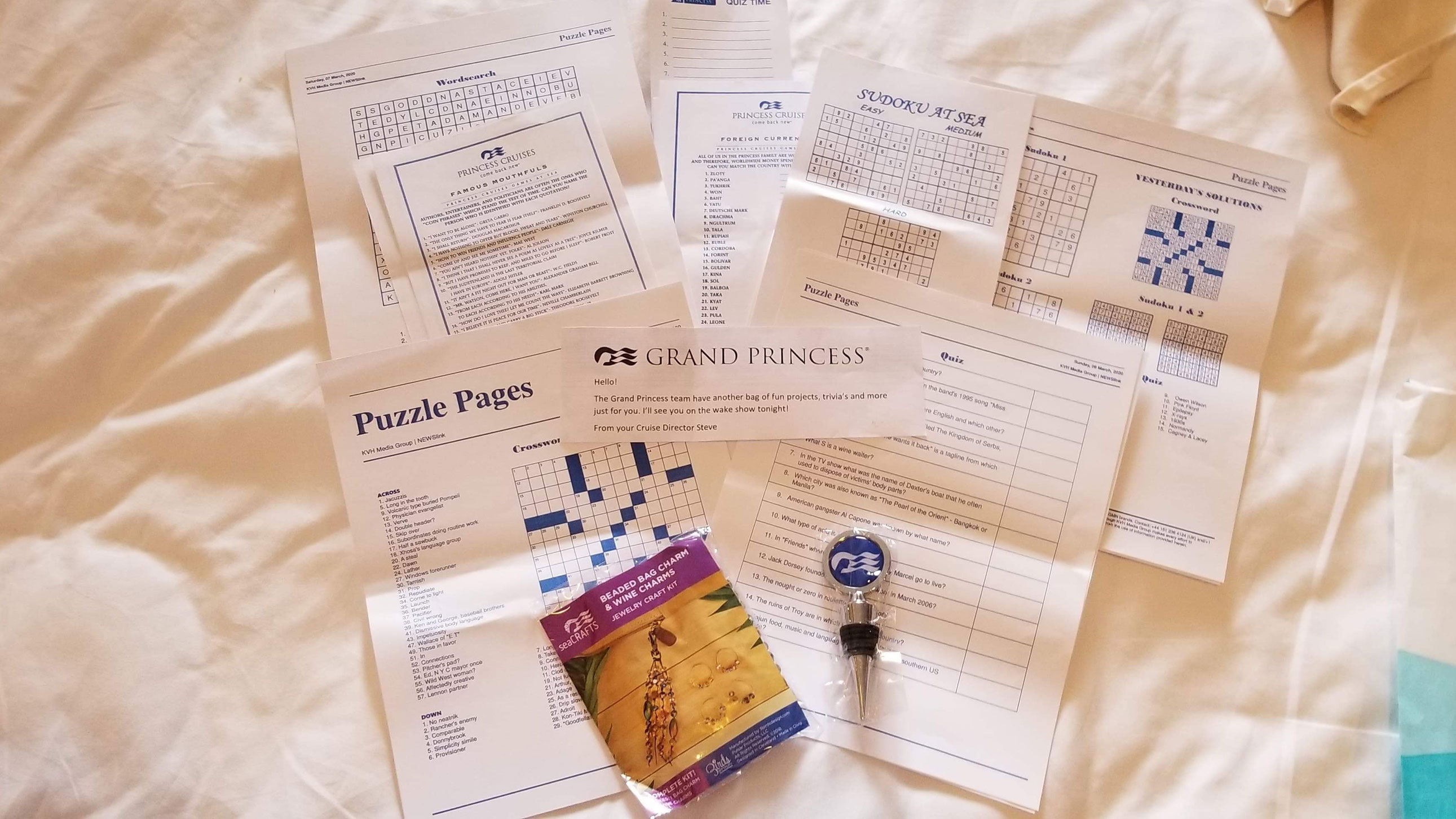 The couple will be shipped to Dobbins Air Reserve Base in Marietta, Georgia, with other passengers after the Grand Princess docks, but what happens next is a mystery, she said. Among the questions left unanswered is when the quarantine period begins, she said.

"It's going to be a lot more time away from our family," she said. "I would love to see my family. However, I also know there's a lot of concerns from a lot of people, and so my approach is I think it's the right thing to do. I think quarantining everybody for those 14 days is in the best interest of other people and their health."

The vessel hasbeen in limbo since Wednesday, when a former passenger died. Test kits were sent to the ship, and Vice President Mike Pence said Friday that 19 crew members and two passengers aboard had tested positive for the virus.

When the ship docks Monday, passengers will undergo medical screening by the US Department of Health and Human Services and the Centers for Disease Control and Prevention, according to a statement from Travis Air Force Base.

Passengers showing symptoms and those in need of medical support will be the first off the vessel, ship Capt. John Harry Smith said. Asymptomatic passengers will be taken to military installations for screening and a 14-day quarantine.

California residents will be taken to Travis Air Force Base or Marine Corps Air Station Miramar while residents of other states will go to Texas or Georgia. Charter flights will be arranged for international guests, the captain said.

The ship's 1,113 crew members will remain on the ship when it departs the Port of Oakland. Plans for their quarantine have not been determined, the cruise line said.

There are now 34 states with coronavirus cases. Nationwide, the number of coronavirus caseshas reached 565, local, state and federal health officials say. Among those are the 21 people who've tested positive aboard the Grand Princess.

The cruise was intended to be a two-week voyage from San Francisco to Hawaii, but was stopped on its return trip Wednesday when officials learned that a California man who'd traveled on the ship last month contracted coronavirus and died.

Thepassengers now find themselves confined to their rooms and facingtwo weeks of quarantine when they disembark.

"I don't know what to expect," California resident Archie Dill said. "If they had a well-formed plan and let us know what was happening that would be one thing, but right now you're looking at an uncertain destination."

Attempts to limit the virus from spreading to healthy passengers have resulted in little contact among those on board, Dill said.

Passengers have been entertained in their quarters by activity kits with word searches, sudoku and quizzes handed out by the cruise.

A rotation program has been implemented to allow the passengers to get fresh air and sunlight, Smith said

One passenger was evacuated from the ship Sunday morning formedical reasons unrelated to coronavirus, the cruise line said in a statement.

In Florida, the CDC issued a no-sail order to another cruise ship, the Caribbean Princess, after learning two crew members had transferred from another vessel, aboard which at least one guest tested positive for the virus. Neither crew member appears symptomatic and they are both remaining in their cabins out of an abundance of caution, Princess Cruises said in a statement.

"The Caribbean Princess will make a brief stop at Grand Cayman for test kits and then set sail for Florida. The ship is expected to remain anchored off the coast of Florida until the 'no sail' order is lifted by the CDC," the statement said.

The Regal Princess was held off the coast of Florida under similar circumstances Sunday. Two crew members were tested for coronavirus, and after the tests came back negative the ship was allowed to dock and passengers were allowed to disembark.

Requests for self-quarantine as cases spike

At least 22people have died from the virus in the United States -- 19in Washington state, two in Florida and one in California.

A nursing home in a Seattle suburb has become the epicenter of the US outbreak. Sixteen people with ties to the Life Care Center of Kirkland have died. Dozens of residents have been transferred to hospitals, leaving 55 residents at the facility that housed 120 in mid-February.

Most of the nation's coronavirus cases have been in Washington, where at least 137 people have been infected.

There are also more than 100 cases in New York, where officials announced 16 new cases Sunday. New York state officials have urged more than 2,500 people to self-quarantine, and Gov. Andrew Cuomo declared a state of emergency Saturday.

In California, more than 9,700 returning travelers were told to stay home and monitor their health, health officials said Thursday.

Self-quarantine is reserved for people who may have come into contact with someone who was infected. People in self-quarantine are asked to remain at home until it can be determined that they are not ill. Health officials can issue orders to make those quarantines mandatory and make violating them illegal.

The US response to coronavirus has shifted from containment to mitigation, Surgeon General Jerome Adams said Sunday.

"Initially, we had a posture of containment so that we could give people time to prepare for where we are right now. We're shifting into a mitigation phase, which means that we're helping communities understand you're going to see more cases," Adams said.

"Unfortunately, you're going to see more deaths, but that doesn't mean that we should panic."

Adams said those who aren't sick should not wear face masks as they often cause more harm than good. Instead, people should wash their hands with soap and water frequently for at least 20 seconds and stop touching their faces, health officials advise.