Some Southern states are reopening businesses; US death toll passes 42,000 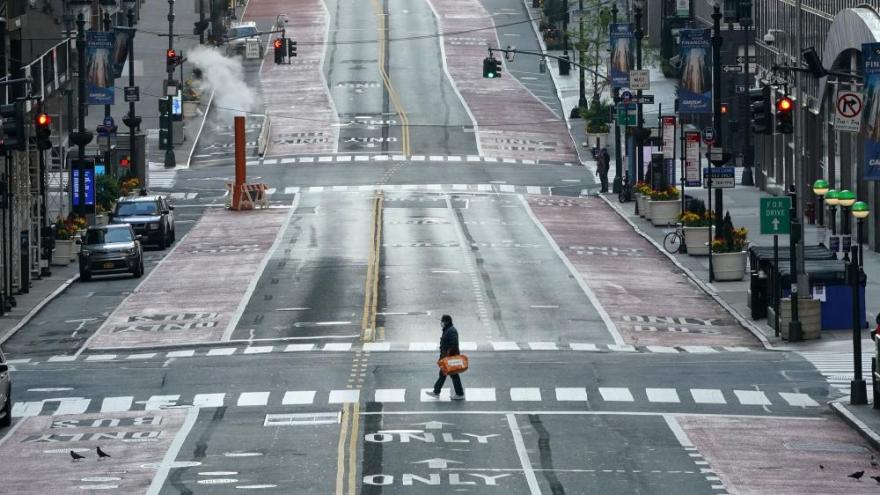 As some state's consider reopening others want more time and testing before making a decision.

(CNN) -- Three Southern states are moving to reopen parts of their economies, even as health experts and government leaders debate whether there is sufficient coronavirus testing available to relax restrictions.

Beaches will reopen at noon Tuesday, McMaster said at a press conference.

In Tennessee, Gov. Bill Lee said the state's stay-at-home order will expire April 30, and "the vast majority of businesses in 89 counties" will be allowed to open again May 1, according to a statement.

According to federal guidelines released last week, states should see a sustained decrease in cases over a 14-day period before easing restrictions. The guidelines aren't mandatory.

"We have asked every governor to follow the guidelines," said Dr. Deborah Birx, the White House coronavirus response coordinator, at a press briefing, adding though that "each of the governors can decide for themselves whether they've reached specific guidelines."

According to a model from the Institute for Health Metrics and Evaluation, Georgia hit its projected "peak" for daily deaths on April 7, but the model also states that Georgia shouldn't relax social distancing measures until after June 15.

South Carolina's state epidemiologist, Linda Bell, said that the state may see 750 new cases per week by early May.

Health experts have said the United States needs to rapidly increase its ability to test people for the virus in order to safely reopen without sparking a new wave of infections. Many governors have asked the federal government -- which has refused to take responsibility for shortages -- to help ramp up that testing capability.

In Georgia, Kemp said the state is taking efforts to "significantly increase our capacity (for testing) as we take measured steps forward."

Some Americans, fed up with more than a month of lockdowns, restrictions and widespread unemployment, have begun pushing for an immediate reopening in protests around the country.

Egged on by President Donald Trump, the protesters have accused Republican and Democratic governors and public health officials of limiting their "liberty" and "freedom" with government restrictions intended to stop the rapidly spreading illness from moving through communities and overwhelming hospitals.

In Denver, the protests led a small group of health care workers to stand in front of their cars as a form of counterprotest.

The protests represent just a tiny fraction of people and remains a minority opinion. A Pew poll last week found 66% of U.S. adults say their greater concern is that state governments will lift restrictions too quickly, rather than not quickly enough.

The government's restrictions have so far slowed -- but not stopped -- the virus. For example, New York Gov. Andrew Cuomo said that the state has passed the peak of its outbreak. Even so, 500 people died and more than 1,300 people were newly hospitalized with Covid-19 just on Sunday.

"We can control the beast, yes, but the beast is still alive," he said. "We did not kill the beast. And the beast can rise up again."

In all, there have been at least 42,138 deaths and more than 784,000 cases of coronavirus in the US as of Monday evening, according to data from Johns Hopkins University.

While some states have loosened aspects of the shutdown, several regional groups of states have discussed strategies to reopen with each other.

"It's not going to be a light switch," said Dr. Scott Gottlieb, former commissioner of the US Food and Drug Administration. "They're going to reopen gradually over the course of May and June."

Harvard researchers warned that if the country wants the economy to open back up -- and stay that way -- testing must go up to at least 500,000 people per day. Testing nationwide is currently at 150,000 per day, they said, adding that "If we can't be doing at least 500,000 tests a day by May 1, it is hard to see any way we can remain open."

Over the weekend, President Trump said governors had the capacity to complete more testing but weren't utilizing their resources properly.

Northam said he wants to see at least two weeks of trending numbers of coronavirus cases decreasing before businesses in his state reopen.

"We've been fighting for testing. It's not a straightforward test. We don't even have enough swabs believe it or not," Northam said.

Illinois Gov. J.B. Pritzker gave similar remarks. He said he wants things to be reopen so residents can enjoy recreation this summer but said they need to listen to scientists and doctors investigating the virus before they can comfortably and safely reopen businesses to the public.

Despite several state leaders announcing their intention to reopen, over the weekend many civilians held protests across the country demanding to be let back to work to try and resuscitate the economy.

"Shutdown the shutdown," one protest sign in Maryland said.

Despite the reopening of some sectors of South Carolina, a coalition of coastal towns in the Charleston area said in a joint statement Sunday that they will continue to limit access to nonresidents and monitor travel within their jurisdictions.

Other states are working on plans to reopen following the release of guidance from the Centers for Disease Control and Prevention last week that emphasized the need for states to expand their testing capacity.

Texas Gov. Greg Abbott announced three orders and the establishment of a Strike Force to Open Texas. The team will work to develop strategies, standards and time frames for reopening businesses. Abbott plans to announce a plan to reopen on April 27, according to the order.

Aside from testing for the virus itself, antibody tests are being considered as a main component in determining reopening, Dr. Stephen Hahn, the FDA commissioner, said in a statement Saturday.

"Results from these tests can help identify who has been infected and developed antibodies that may protect from future infection as well as identify those still at risk," the statement said.

As promising as these tests could be, the FDA statement said that it is still unknown if people with antibodies are fully protected from reinfection or how long their immunity might last.

Despite the lack of information on how effective the current antibody testing will be, Gov. Cuomo said Sunday that the state will undertake the "most aggressive" statewide antibody testing survey in the country.

"We are going to start antibody testing across the state (Monday)," Cuomo said. "We are going to do that in the most aggressive way in the nation. This will be the first true snapshot of exactly how many people were infected by COVID-19 and where we are as a population and will help us to reopen and rebuild without jeopardizing what we've already accomplished."

If and when restrictions are lifted they will need to monitor infection and hospitalization rates and adjust their plan accordingly.

"And if we went through all of this and lost all of these people and forced essential workers and hospital workers to do unbelievable tasks to get us through this crisis and we recreate the crisis, then shame on us," Cuomo said.