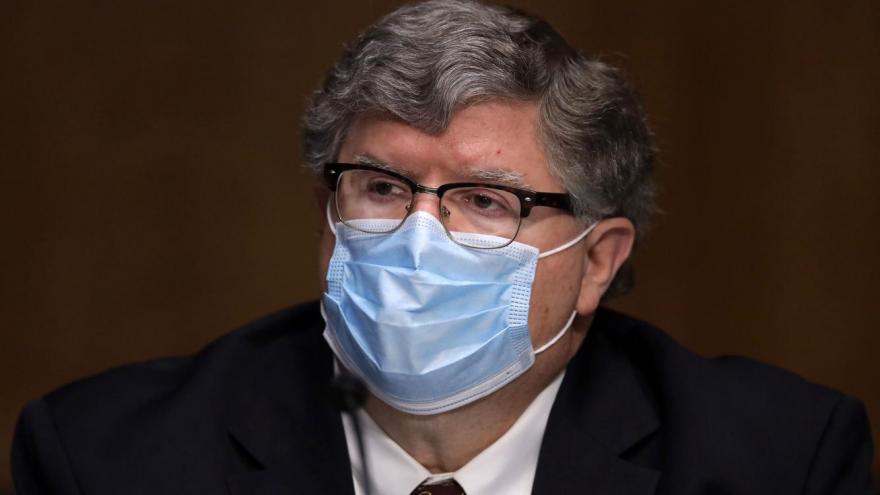 (CNN) -- The Treasury Department's special inspector general for pandemic recovery is warning of "reduced oversight" of two Covid relief programs given billions to distribute, as it says its jurisdiction has been hampered and claims "things are not working well."

In a quarterly report to Congress released Friday, Brian Miller, the special inspector general, said his office and the Treasury inspector general were engaged in a months-long internal struggle concerning oversight of the airline industry's Payroll Support Program and the Coronavirus Relief Fund for state and local governments.

The feud between the two inspectors general illustrates the challenges in tracking and preventing fraud in trillions of dollars in relief funds, and comes as the White House is pushing for trillions more in spending as part of its ambitious economic agenda following President Joe Biden's signing of a $1.9 trillion Covid-19 economic relief package in March.

In his report, Miller said the Treasury Office of General Counsel and the Treasury inspector general did not feel his office had the authority to oversee the two pandemic relief programs, and so denied access to "mission-critical" data and declined to partner with Miller's office.

Miller sought a final determination in January on his office's jurisdiction from the Department of Justice's Office of Legal Counsel. The OLC issued an opinion Thursday that the Treasury's direct loans and the Federal Reserve's lending programs fall under the purview of Miller's office, but the Coronavirus Relief Fund, Payroll Support Program, and Paycheck Protection Program do not.

"The consequence is permanently reduced oversight of these programs," Miller wrote of the OLC opinion.

"Treasury supports strong oversight and we will continue to make sure all of our Inspectors General congressional committees of judication and other oversight bodies have the information they need," a Treasury spokesperson said in a statement.

A Treasury official told CNN that the department's programs under the CARES Act are "all subject to oversight by multiple, overlapping oversight bodies."

Miller's report also contained a letter from Treasury's principal deputy general counsel stating that Treasury hoped the two inspectors general offices could "resolve their disagreement" and that the department would abide by the OLC's opinion on scope of jurisdiction.

"Treasury is dedicated to the prevention of waste, fraud and abuse, and we are committed to being responsive and helpful to SIGPR," Laurie Schaffer wrote in an April 27 letter to Miller.

Because of the OLC's determination, Miller said, his office will have to "discontinue many ongoing oversight efforts and transfer others, including criminal investigations and leads."

"SIGPR's jurisdiction has come to be viewed narrowly, not expansively, and my only conclusion is that 'things are not working well,' " he said.

Miller called on lawmakers to pass legislation to "clarify" his office's mandate to provide oversight of the Treasury's pandemic-related programs.

The special inspector general was tasked with auditing and investigating the loans, loan guarantees and other investments made by the Treasury secretary for some of the stimulus bill's programs.

The legislation also instructs the special inspector general to provide quarterly reports to Congress summarizing its activities and an up-to-date accounting of the loans and other transactions.

Miller, a former lawyer in the Trump White House counsel's office, was tapped by then-President Donald Trump for the role, prompting sharp criticism from Democrats. He was confirmed by the Senate last June on a 51-40 vote, with then-Sen. Doug Jones as the only Democrat to support his nomination.