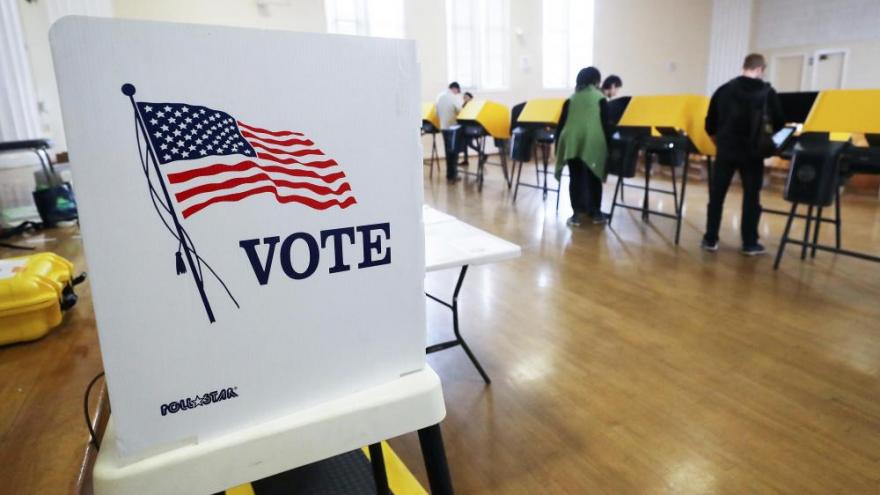 Republican state legislators and secretaries of state announce the creation of a commission that will look at election laws amid a push to curb expanded access to voting. Pictured here voters prepare their ballots at an L.A. County 'vote center' on March 1, 2020 in Los Angeles, California.

(CNN) -- Republican state legislators and secretaries of state on Wednesday announced the creation of a commission that will look at election laws amid a push to curb expanded access to voting.

The announcement from the Republican State Leadership Committee comes as GOP state lawmakers in key battlegrounds are now racing to roll back provisions that expanded access to voting, citing constituent concerns about voting integrity after the election was marred by baseless allegations of voter fraud pushed by former President Donald Trump and other GOP officials. Those claims culminated in the deadly January 6 insurrection at the US Capitol.

The commission said in a statement that the goal is "to restore the American people's confidence in the integrity of their free and fair elections" by "making it easier to vote and harder to cheat."

Alabama Secretary of State John Merrill and Michigan state Sen. Ruth Johnson are leading the commission, which will work alongside state legislators as they push to make changes to election laws.

"While there is no one-size-fits-all solution to anything, every state in the nation should be working to assess and improve their respective election laws," said Merrill in a press release Wednesday.

Amid the pandemic, mail-in voting was dramatically expanded in 2020 as election officials and lawmakers looked to balance public health precautions with the right to vote -- and led to a dramatic shift in voter turnout, with Democrats disproportionately favoring mail-in or early voting options.

Though there has been no evidence of widespread voter fraud, Republicans nationally have made election law changes a priority this year.

Overall, lawmakers in 33 states have proposed more than 165 bills that would restrict voting, according to an updated analysis of election bills by the Brennan Center for Justice. That's more than four times as many bills of this kind that had been introduced at this point last year.

Among the areas the commission will focus on are voter roll accuracy, absentee or mail-in voting and the process for counting ballots that are received by Election Day.

"The Covid-19 pandemic created unprecedented challenges and exposed that our election processes are far from perfect. ... We can all learn from what others do well as we try to provide assistance to the leaders across the country that are spearheading the effort to reform our elections," Johnson said.

Meanwhile, Democrats responded on Wednesday by criticizing the commission as a coordinated effort of "voter suppression."

"Republicans are using the lies they told about election integrity to launch a coordinated effort to roll back voting rights nationwide," said Jessica Post, president of the Democratic Legislative Campaign Committee, in a news release.

"Republicans are working to make sure that they never lose another presidential election and we need to stop them."