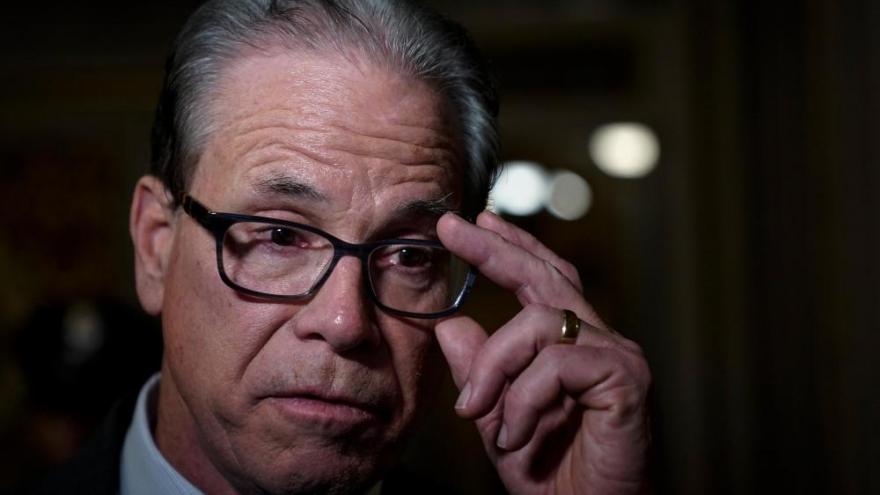 (CNN) -- The House impeachment managers presented senators with videos of their colleagues fleeing a pro-Trump mob, which breached the US Capitol shouting "stop the steal." They showed the rioters searching for then-Vice President Mike Pence and House Speaker Nancy Pelosi, and rummaging through the senators' desks on the chamber floor.

Some of the Trump supporters were dressed in tactical gear, armed with zip-ties. Others held Trump 2020 flags, broke windows with poles and set up a gallows for Pence, who was constitutionally obligated to oversee the certification of the 2020 presidential election, and the peaceful transfer of power to the Democrats.

But even after witnessing the deadly violence firsthand, and being reminded of it again at the scene of the crime, many Republican senators appeared no closer on Wednesday to convicting former President Donald Trump on the charge of "incitement of insurrection."

While they were struck by the impeachment managers' presentation, these Republicans said that the House Democrats did not prove Trump's words led to the violent actions. They compared the January 6 riot to last summer's racial justice protests and criticized how the trial is being handled.

Sen. Lindsey Graham said he couldn't believe "we could lose the Capitol like that" but added that it didn't change his mind on whether to acquit Trump during the trial.

"I think there's more votes for acquittal after today than there was yesterday," the South Carolina Republican said.

Sen. Mike Braun said the managers' visual presentation was "riveting," adding, "It's just as kind of hard to take now as it was then." But when asked if it had changed his view, the Indiana Republican said, "When you think the process is flawed in the first place, I think it's going to be different to arrive at a conclusion on the facts and the merits itself."

And Sen. Ted Cruz said a direct link from Trump to the pro-Trump riot was "strikingly absent." The Texas Republican claimed that "there's not a political candidate in the country," including "every single one of the Democratic senators," who hasn't used the same language as Trump, who told his supporters "to fight like hell."

"They spent a great deal of time focusing on the horrific acts of violence that were played out by the criminals, but the language from the President doesn't come close to meeting the legal standard for incitement," Cruz said of the managers' presentation.

The comments are the latest indication of the high hurdles Democrats face in getting the 67 votes needed to convict Trump -- with 17 Republicans needed to break ranks if all 50 Democrats vote to convict the former President and then bar him from ever serving in office again.

"It was reliving a horrible day, a horrible day. That's not easy," said Sen. Rob Portman, an Ohio Republican who is retiring at the end of next year. But asked if he's more likely to convict, Portman said: "Well from the start I've said that I think this is about removal. And I think it's a bad precedent, to be convicting former presidents, private citizens."

The sentiment was echoed by most Senate Republicans.

"I think you get at best six Republicans -- probably five and maybe six," GOP Sen. Tim Scott told CNN when asked if the video and footage changed his mind on convicting Trump. Asked if he considers himself an impartial juror, the South Carolina Republican said: "I think I'm as impartial as the other 99."

The six Republicans could be Sens. Lisa Murkowski of Alaska, Susan Collins of Maine, Pat Toomey of Pennsylvania, Ben Sasse of Nebraska, Mitt Romney of Utah and Bill Cassidy of Louisiana -- the six Republicans who broke with their party Tuesday to vote that the impeachment trial was constitutional.

Cassidy, facing backlash among local Republicans for that vote, dismissed the idea that GOP grumbling could influence his vote, saying, "My first loyalty is to the Constitution." He added he has yet to make up his mind on conviction.

"I'm angry, I'm disturbed," Murkowski said of the video footage. "The evidence that has been presented is pretty damning."

In a speech before the Capitol rampage, Trump urged his supporters "to peacefully and patriotically make your voices heard" but also to "fight like hell," "never give up" and "never concede." A couple days earlier, he tweeted that "The 'Surrender Caucus' within the Republican Party will go down in infamy as weak and ineffective 'guardians' of our Nation, who were willing to accept the certification of fraudulent presidential numbers!" He repeatedly told his supporters to "stop the steal!"

During the riot, Trump tried to call Alabama Sen. Tommy Tuberville to delay the certification of his loss and said Pence lacked the "courage to do what should have been done to protect our Country and our Constitution."

A number of Republicans seemed impressed by the impeachment managers, after sharply criticizing the President's defense team Tuesday for lacking a coherent response.

South Dakota Sen. John Thune, the minority whip and a member of GOP leadership, said that the House managers did an "effective job" and were "connecting the dots" from Trump's words to the insurrection.

Yet other members of the Senate GOP leadership made clear where they were headed.

Missouri Sen. Roy Blunt, who is up for reelection in 2022 and sits in Senate GOP leadership, made clear the video didn't change his mind about convicting Trump.

"Well, you know, you have a summer where people all over the country are doing similar kinds of things," Blunt told CNN when asked about the impact the new footage had on his deliberations. "I don't know what the other side will show from Seattle and Portland and other places, but you're going to see similar kinds of tragedies there as well."

Others were clearly moved.

Romney, the only Republican to vote to convict Trump in his first impeachment trial last year, was shown on screen during the managers' presentation fleeing the Capitol after Capitol Police officer Eugene Goodman urged him to run in the opposition direction of where he was heading.

"Obviously very troubling to see the great violence that our Capitol Police and others are subjected to," Romney said. "It tears you at your heart and brings tears to your eyes. That was overwhelmingly distressing and emotional."

The Utah Republican said he was "fortunate" to see Goodman there and later spoke to him on the Senate floor Wednesday. "I expressed my appreciation to him for coming to my aid and getting me back into the path of safety."

But when asked whether the scenes shown would change the minds of his fellow Republicans, Romney said, "I can't predict how other people will react."

For most Republican senators, Wednesday's presentation did not seem to affect how they'll vote. Many are on record decrying the trial as unconstitutional since Trump is now a former president, and the punishment for conviction is removal. If convicted, however, Trump could also face a vote in the Senate barring him from ever again serving in public office.

Yet GOP senators including Marco Rubio of Florida would only say Trump bears "some responsibility" for the riot and argued the Senate should have no role in trying a former president.

"Who wouldn't be?" asked Sen. Ron Johnson, a Wisconsin Republican, when questioned if he was shaken by the footage he saw on Wednesday.

But when asked if he held Trump accountable, Johnson said, "I hold those people responsible."