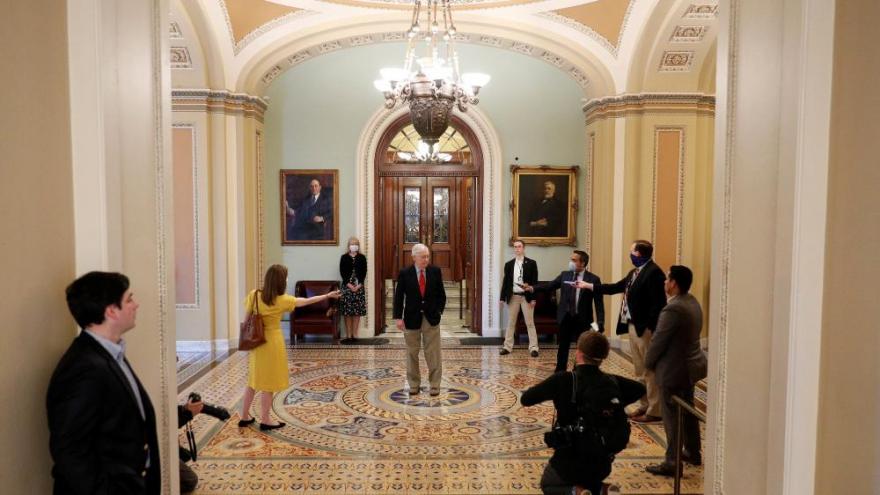 A number of Senate Republicans are publicly and privately expressing an openness toward a new round of funding to cash-strapped state and local governments, even as Senate Majority Leader Mitch McConnell floated the possibility of states declaring bankruptcy rather than receive more federal aid.

(CNN) -- A number of Senate Republicans are publicly and privately expressing an openness toward a new round of funding to cash-strapped state and local governments, even as Senate Majority Leader Mitch McConnell floated the possibility of states declaring bankruptcy rather than receive more federal aid.

Republicans are in general agreement with McConnell that they should hit pause on any new funding and wait until more money from the historic federal response effort is spent -- a topic that three GOP sources said was debated during a private conference call Thursday.

But despite approving nearly $3 trillion in aid within two months, there is an acknowledgment among some Senate Republicans that another piece of legislation will almost certainly be needed, especially if much of the economy remains shuttered. And that means some of their states and cities -- hit hard by the crisis with the sharp decline in tax revenue -- may need another bailout from Washington, something that is already dividing Republicans as Democrats demand more money in the next emergency relief package.

"I'm going to take an objective, open view to see how critical that concern is," said GOP Sen. Mike Braun of Indiana when asked if he's open to backing $500 billion, as the National Governors Association said was needed for states. "On issues like this, I think taking a hardline is kind of a wrong way to go about it."

Asked if he favored seeing states go bankrupt, rather than receive federal aid, Braun told CNN: "I think that would be something that I think would be not ideal and would have a cascading effect and add even more uncertainty."

On the Thursday call, McConnell laid out his concerns about Democrats' asks for more money for state and local governments, saying blue-state governors seem eager to have Washington resolve their long-standing fiscal problems, including their pension accounts, according to sources familiar with the matter.

McConnell criticized New York Gov. Andrew Cuomo's calls for more federal funding on the call. He urged his colleagues to assess how the already-approved money was being spent before agreeing to more spending more for the government, saying the matter would be debated when the Senate is scheduled to return May 4.

Most GOP senators who spoke on the call signaled an agreement with the GOP leader's approach, according to a source on the call, indicating that any new money must come with strings attached.

But Louisiana Sen. Bill Cassidy, whose state has been hit hard by the pandemic, listed the issue as among his priorities on the call, according to two of the sources. Cassidy has introduced a bill with Democratic Sen. Bob Menendez of New Jersey that would provide $500 billion for state and local governments.

"I personally anticipate it will be in future packages," Cassidy said on a call with reporters this week. "This is critical to financial health being restored for municipalities to provide essential services, so that employers and employees can restore their financial health."

Multiple Republican aides familiar with internal discussions tell CNN that the issue of funding local and state governments isn't as simple as deciding "yes" or "no." Instead, many aides view additional money as eventually inevitable as state governments stare down massive reductions in sales and income tax revenues as a result of the coronavirus. The question, aides say is how to structure any money in a way that it isn't a bailout to states that Republicans viewed as mishandling their state pension funds or other budgetary items long before coronavirus took hold.

"At some point everyone realizes there will be some state and local money, but the question is how to you make sure the money goes to the state and local issues actually affected by coronavirus?" said one GOP aide familiar with the discussions. "The leader is setting the framework that this is not a blank check and taking one for the team."

Indeed, many Republicans aren't ruling out more funding for states.

Sen. Kevin Cramer, a North Dakota Republican, told CNN that Congress needs to "pump the brakes without slamming them."

"We certainly shouldn't bail out states beyond what the virus is costing them," Cramer said.

McConnell set off the debate earlier this week when he told conservative radio host Hugh Hewitt that he would "certainly be in favor of allowing states to use the bankruptcy route."

"It saves some cities. And there's no good reason for it not to be available," he said. "My guess is their first choice would be for the federal government to borrow money from future generations to send it down to them now so they don't have to do that. That's not something I'm going to be in favor of."

Democrats, including Senate Minority Leader Chuck Schumer and House Speaker Nancy Pelosi, slammed the idea, and even some Republicans were critical.

A Senate GOP aide said that McConnell is not pushing legislation to allow states to file for bankruptcy -- and is not "leading with that approach." The aide said that the GOP leader was making the argument that some states are eager to take advantage of federal funding to deal with their long-standing budget shortfalls rather than the costs from the coronavirus crisis.

"I don't believe it's the federal taxpayers' responsibility to bail out them for not fixing their pension plans and not making the tough choices," Sen. Rick Scott, a Florida Republican, told reporters Thursday. "And I don't believe that a taxpayer from Sarasota should be bailing (out) taxpayer from New York City."

The $2.2 trillion stimulus package signed into law last month included $150 billion for states and local governments, funding that could be used for costs incurred due to the pandemic that weren't already budgeted for. Democrats pushed for an additional $150 billion for states and cities in the $484 billion relief package signed by President Donald Trump on Friday, but McConnell rejected that approach, arguing that the state and local money from the stimulus had yet to be fully spent. No money for state and local governments was included.

After the deal was reached over the latest proposal, Republican Sen. Rob Portman of Ohio said in a statement that "we need to more to help state and local governments affected by this crisis, and I believe the next package should provide assistance." Portman pointed to declining revenue from income and sales tax due to the crisis. "State and local governments should be able to use the funds allotted to them to replace funding for our first responders, police and fire departments."

If the Senate returns the week of May 4, pressure is bound to grow on senators -- particularly vulnerable Republicans facing reelection -- to back further aid. On Friday, aides to several Republicans facing reelection bids -- Sens. Thom Tillis of North Carolina, Steve Daines of Montana and Cory Gardner of Colorado -- did not respond or declined to comment about whether their bosses back additional aid to states and cities.

Republican Sen. Susan Collins of Maine said in a statement that she supports "providing additional federal assistance to states and municipalities that have lost substantial revenue due to Covid-19."

"To help states respond to the crisis, Congress has already provided $150 billion through the Coronavirus Relief Fund, of which $1.25 billion is for Maine. The decisions on allocations within a state could be left to the governor," Collins said.

Braun said both moderates and conservatives within the Senate GOP Conference are worried about adding even more to the deficit, with the Congressional Budget Office projecting on Friday an eye-popping $3.7 trillion shortfall for 2020. But he signaled a clear openness for more federal support, including for business like in his home-state's agriculture industry, especially if the economy remains shuttered.

Others are still uncertain.

"We ought to step back for a second and hit the pause button," Sen. Pat Toomey, a Republican from Pennsylvania, told reporters on a call Thursday. "We will have cases where money goes to places where it shouldn't go. We've created deficits here, that's more than twice as big as the biggest deficit during the financial crisis, back in 2009. So for all of these reasons, I think we ought to step back."

State and local funding is just one of multiple thorny political issues emerging after Congress managed to pass four spending packages with bipartisan majorities. Democrats are pushing for an expansion of vote by mail that Republicans and Trump oppose. Trump is demanding the US Postal Service raise prices in order to receive funding, while Democrats say that more money is needed or the USPS will go out of business. And it's unclear they could reach another agreement on further benefits to unemployment or solve tax issues like a payroll tax cuts.

Pelosi said Friday that her caucus is already working on the next package and insisted Friday that it will include state and local funding. She was coy about how other issues would play out in the negotiations, declining to say whether Democrats would include a vote-by-mail provision in the next bill.

"There will not be a bill without state and local," Pelosi said at her weekly press conference. "Let's just move forward. There will be a bill, and it will be expensive."