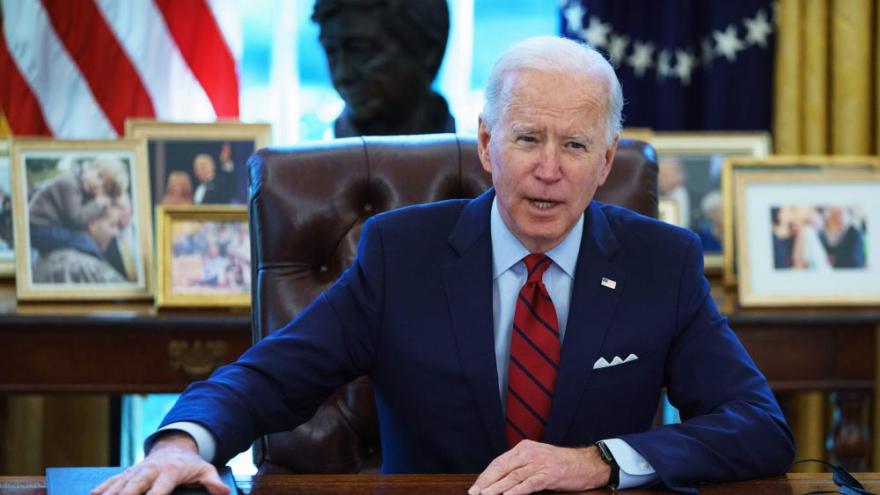 A group of 10 Republican senators have called on President Joe Biden to throw his support behind their own Covid-19 relief package.framework.

The lawmakers, including Sens. Susan Collins of Maine, Lisa Murkowski of Alaska, Mitt Romney of Utah and Rob Portman of Ohio, told Biden in a letter that they devised the plan "in the spirit of bipartisanship and unity" that the President has urged and said they plan to release a full proposal Monday.

The Republican proposal represents the most significant response yet to the White House's planned package, though with a price tag more than a trillion dollars less than the Democratic plan, the GOP proposal will likely face opposition from congressional Democrats. The White House, however, signaled Sunday an openness to compromising on some parts of Biden's plan.

The counterproposal includes a total of $160 billion for vaccine development and distribution, testing and tracing, and treatment and supplies, including the production and deployment of personal protective equipment. It also includes a new round of direct payments for "families who need assistance the most," extend enhanced federal unemployment benefits at the current level and provide $4 billion to bolster behavioral health and substance abuse.

Louisiana Sen. Bill Cassidy, one of the Republicans who signed on to the letter, told Fox News on Sunday that the GOP plan includes payments starting at $1,000 -- an amount lower than the $1,400 Biden's plan provides for -- that would decrease depending an individual's income level.

An aide close to the process told CNN the plan is expected to be between $500-$600 billion, though lawmakers are still waiting to hear from the Congressional Budget Office on the estimated cost.

Portman, appearing on CNN's "State of the Union" on Sunday, wouldn't specify how much the group's package would cost, but said it will be "less than $1.9 trillion," the cost of Biden's plan.

"You know, our proposal is an example -- it's going to have all of the health care funding that President Biden has in his proposal, all of it. So there's a lot of bipartisanship," he said, adding separately that "if you can't find bipartisanship on Covid-19, I don't know where you can find it."

Republicans devise their own plan

In recent days, it had become apparent to Republicans that the narrative taking hold suggested the Democrats had a plan for Covid relief and Republicans could either stand in the way or agree to it. They didn't feel like there was a negotiating place for them to start and the frustration among Republicans was palpable.

As the week dragged on, one idea being floated was that they needed their own alternative to present to the White House. And most importantly, they needed 10 Republicans to be on board.

One of the issues with having just the support of the so-called Sweet 16 group, is that the group of centrist senators only includes 8 Republicans, which never was going to be enough to pass any bill. They needed 10 to show there were enough willing partners to give Democrats the 60 votes needed to pass legislation in a bipartisan manner.

One GOP aide familiar with the talks told CNN that the group worked all day Thursday and Friday, and by Saturday, they had broad agreement, but the details took time to figure out.

Any bipartisan plan will likely lose votes on the Democratic side, meaning for every progressive senator against the proposal, they'd need another Republican supporting it. Still, this idea of putting two plans side by side is one that aides and members have been discussing for several days as a way to force the conversation back to a bipartisan place.

Eight Senate Democrats from the "Sweet 16" group talked on Saturday about how to handle Covid relief negotiations with Republicans and how they should vote on a budget resolution this week that would unlock reconciliation -- a procedural tactic being pushed in part by Vermont Sen. Bernie Sanders, the incoming chairman of the Senate Budget Committee -- and allow Democrats to eventually pass a relief bill with just 51 votes, a Democratic Senate aide told CNN.

The Democrats discussed whether voting on a budget resolution would spoil their ability to continue to work in a bipartisan fashion on a relief package. The budget vote is just the beginning of the process, but the source told CNN there is still concern that moving ahead would send a signal that Democrats are going ahead with a partisan process and potentially poisoning the well.

Portman told Bash that such a maneuver would do just that. The prospect of Democrats using reconciliation "is not in the interests of the Democratic Party," he said Sunday, arguing that "it will set President Biden down a path of partisanship that I think will poison the well for other bipartisanship we'll need on so many issues."

The source told CNN that most members on the Democratic call were comfortable with moving forward on at least the budget resolution, but there is still work to do to get every Democrat comfortable. There is a legitimate desire to give the new President a win on his first legislative push, but concerns remain about not giving bipartisan talks enough time to fully develop.

Moderate Democrats were given a heads up that Republicans were going to release their own plan, but were not given specifics of what was included.

Ultimately, it will be up to Biden as to whether he wants to give Republicans more time for negotiations, though Senate Majority Leader Chuck Schumer told the New York Daily News Sunday that the Republican proposal is insufficient, stating that Republicans should, "negotiate with us, not make a take-it-or-leave-it offer."

Biden has previously suggested he's open to passing major portions of his $1.9 trillion Covid relief proposal through reconciliation if Republicans refuse to move on the measure.

And while Biden has said he is willing to consider less than $1.9 trillion in relief, White House officials made clear they are not interested in splitting up the legislation by getting a bipartisan vote on some aspects and then passing a separate package along party lines using reconciliation.

Biden's proposed package expands on many of the proposals in Congress' $3 trillion coronavirus relief bill from March and the $900 billion legislation from December, which was scaled back to garner bipartisan support in the Senate.

A test of bipartisanship

The counterproposal will stand as an early test of Biden's stated commitment to reaching across the aisle during his time as president. In his inaugural address earlier this month, the President called for bipartisanship and unity, something the Republican senators referenced in the opening of their letter, writing: "Heeding that important call, we welcome the opportunity to work with you in a bipartisan manner."

The senators also requested a meeting with the President "to discuss our proposal in greater detail and how we can work together to meet the needs of the American people during this persistent pandemic," adding that they "want to work in good faith."

Brian Deese, the director of the White House's National Economic Council, confirmed on "State of the Union" on Sunday that the White House had received the letter and said they would be "reviewing it over the course of the day."

"We've received the letter and we certainly will be reviewing it over the course of the day," Deese said. "What I will say is that the provisions of the President's plan, the American Rescue plan, were calibrated to the economic crisis that we face."

The President, he added, is "uncompromising when it comes to the speed we need to act at to address this crisis."

And pressed on whether the White House was willing to ensure a new round of stimulus checks is targeted toward Americans who most need the money and are most likely to spend it, Deese told CNN they were "open to that idea" and that they "think this plan is targeted to provide cash into the pockets of the people who are the most in need."

Democratic Sen. Jon Tester defended the cost of the Democratic plan Sunday, saying that although it's a large amount, it is not too much, because the economic crisis caused by the pandemic is not improving.

"So, I don't think $1.9 trillion, even though it is a boatload of money, is too much money," Tester, who represents Montana, told CNN's Abby Phillip on "Inside Politics."

Asked Sunday if the White House was open to negotiating parts of Biden's proposal, Deese told CNN they were "certainly open to ideas."

"We welcome input to say where we may have not gotten everything right, where we could be more effective, certainly that's part of the process as we go forward," he said. "But what we really need to focus on now is what do we need to get this economy back on track and what are the resources necessary to do so."

Cedric Richmond, the director of the White House Office of Public Engagement, also signaled that Biden is open to some type of compromise on a package, telling CBS on Sunday that the President wants "to work with both sides in order to help the American people."

"He is very willing to meet with anyone to advance the agenda," Richmond said.