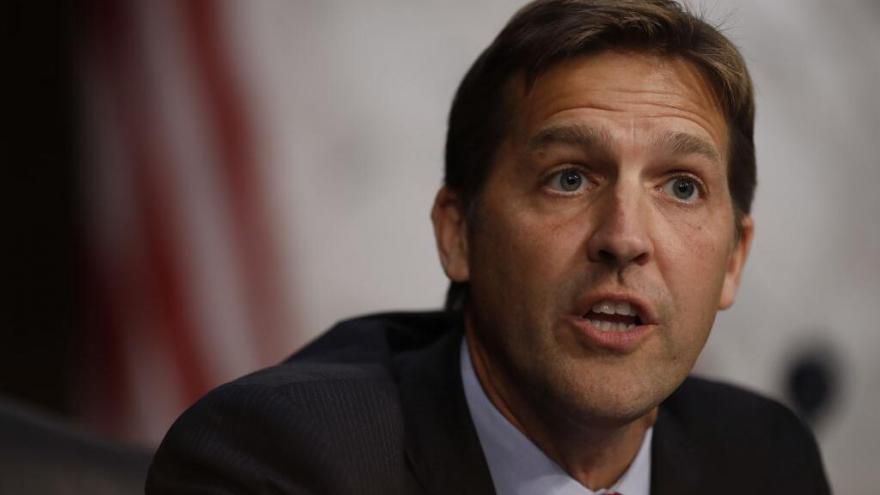 GOP Sen. Ben Sasse wrote on Facebook Wednesday night that he has been urging his Republican colleagues to "reject" objecting the certification process of the Electoral College and President-elect Joe Biden's victory, adding that talk of objecting the process is a "dangerous ploy."

(CNN) -- GOP Sen. Ben Sasse wrote on Facebook Wednesday night that he has been urging his Republican colleagues to "reject" objecting the certification process of the Electoral College and President-elect Joe Biden's victory, adding that talk of objecting the process is a "dangerous ploy."

"Having been in private conversation with two dozen of my colleagues over the past few weeks, it seems useful to explain in public why I will not be participating in a project to overturn the election -- and why I have been urging my colleagues also to reject this dangerous ploy," Sasse, the Republican senator from Nebraska, wrote in a six-part Facebook status late Wednesday night.

He added: "The president and his allies are playing with fire. They have been asking -- first the courts, then state legislatures, now the Congress -- to overturn the results of a presidential election. They have unsuccessfully called on judges and are now calling on federal officeholders to invalidate millions and millions of votes. If you make big claims, you had better have the evidence. But the president doesn't and neither do the institutional arsonist members of Congress who will object to the Electoral College vote."

The occasional critic of President Donald Trump alleged in his post that his Republican colleagues have entertained claims that the election was fraudulent out of fear of the political backlash from the President's base.

"When we talk in private, I haven't heard a single Congressional Republican allege that the election results were fraudulent -- not one," Sasse wrote. "Instead, I hear them talk about their worries about how they will 'look' to President Trump's most ardent supporters."

Sasse's posts come after Missouri Republican Sen. Josh Hawley said Wednesday he will object when Congress counts the Electoral College votes next week, which will force lawmakers in both the House and Senate to vote on whether to accept Biden's victory.

Hawley is the first senator to announce plans to object to the results, which is significant because both a House member and senator are required to mount an objection when Congress counts the Electoral College votes on January 6. Two Republican members of the House tell CNN's Jake Tapper that they expect at least 140 of their GOP colleagues in the House to vote against counting the electoral votes.

The objection will not change the outcome of the election, and will only delay the inevitable affirmation of Biden's victory in November over Trump. Democrats will reject any objections in the House, and multiple Republican senators have argued against an objection that will provide a platform for Trump's baseless conspiracy theories claiming the election was stolen from him.

In his Facebook post, Sasse attacked Trump's conspiracies -- drawing on failed lawsuits by the Trump campaign in Pennsylvania, Arizona, Wisconsin and Georgia -- and wrote that the President's attempted lawsuits were a "fundraising strategy."

Sasse also noted that former Attorney General William Barr said there is no evidence of widespread fraud in the presidential election.

"That's not serious governing. It's swampy politics -- and it shows very little respect for the sincere people in my state who are writing these checks," Sasse wrote.

Sasse ended his lengthy explanation with a discussion on the responsibility he feels to protecting America's institutions at this moment in time.

"Let's be clear what is happening here: We have a bunch of ambitious politicians who think there's a quick way to tap into the president's populist base without doing any real, long-term damage. But they're wrong -- and this issue is bigger than anyone's personal ambitions," Sasse wrote.

Following Biden's projected victory in November, Trump and his legal team have for weeks pushed increasingly desperate appeals and baseless conspiracy theories about his second term being stolen. His attack on the November election and his loss to Biden came to a peak in a brazen lawsuit initiated by the Texas attorney general and brought to the Supreme Court.

The lawsuit -- filed by Texas Attorney General Ken Paxton, a staunch Trump ally -- sought to sue Pennsylvania, Michigan, Georgia and Wisconsin, which all went for Biden, and invalidate their election results.

The high court slapped down the case promoted by Trump on December 11, three days before the Electoral College met to cast votes for Biden as the winner of the November election.

Trump is now eying next week's certification of the results by Congress as his next opportunity to overturn the result, but the process -- even if it is drawn out by members of Congress objecting to states' results -- will inevitably end with Biden entering the White House on January 20.