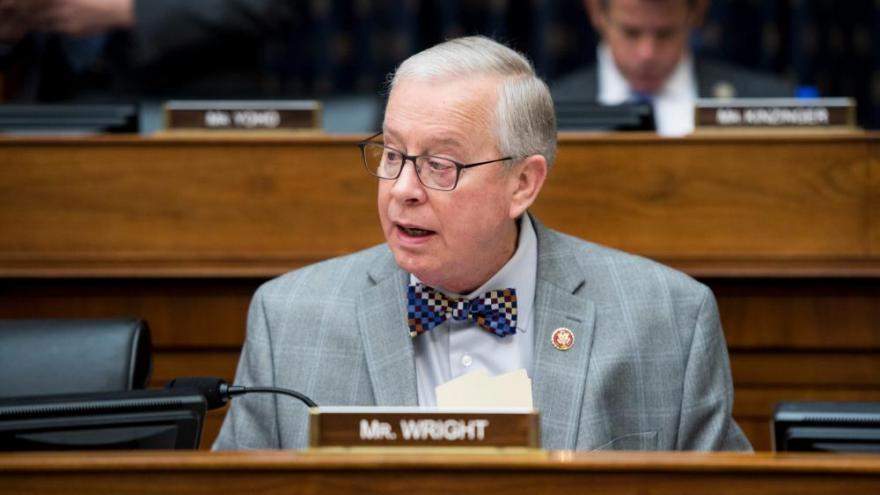 Rep. Ron Wright, R-Texas, takes his seat for the House Foreign Affairs Committee hearing on "NATO at 70: An Indispensable Alliance" on Wednesday, March 13, 2019.

(CNN) -- Republican Rep. Ron Wright of Texas has died, his congressional office announced in a statement Monday, saying that he had been admitted to the hospital after contracting Covid-19.

"Congressman Ron Wright passed away peacefully at the age of 67 on Feb. 7, 2021. His wife Susan was by his side and he is now in the presence of their Lord and Savior," the statement read. "For the previous two weeks, Ron and Susan had been admitted to Baylor Hospital in Dallas after contracting COVID-19."

Wright is the first sitting member of Congress to die after contracting Covid. In December, Congressman-elect Luke Letlow died after being diagnosed with the disease.

Wright's congressional office announced that he had tested positive for Covid-19 on January 21 with the congressman saying at the time in a statement, "I am experiencing minor symptoms, but overall, I feel okay and will continue working for the people of the 6th District from home this week."

House GOP Leader Kevin McCarthy said in a statement Monday, "Our hearts are heavy with the news of Ron's passing. Judy and I send our heartfelt prayers to Susan and their children during this very difficult time."

"Ron Wright was a fighter who passionately served his constituents, Texas, and America," McCarthy said.

President Joe Biden said in a statement Monday that Wright was "a fighter who battled bravely against both cancer and COVID-19, diseases that our nation will continue working tirelessly every day to defeat in the memory of all those we have lost."

"Our prayers are with Ron's wife, Susan, their three children, and their nine grandchildren," Biden said.

House Speaker Nancy Pelosi, a California Democrat, also issued a statement with condolences to Wright's family and lauding the late GOP congressman's "life of public service to the people of Texas."

"As we grieve Congressman Wright's passing, Members of Congress are united in sorrow and pray for the families and loved ones of the over 460,000 Americans who have been killed by the vicious coronavirus," Pelosi said in her statement. "Each death is a tragedy that breaks our hearts and demands strong, urgent action."

The statement from Wright's office on Monday noted that the congressman has also battled cancer.

"Over the past few years, Congressman Wright had kept a rigorous work schedule on the floor of the U.S. House of Representatives and at home in Texas' Congressional District 6 while being treated for cancer," it said.

During his cancer fight, GOP members paid tribute to Wright in December by donning bow ties at the Capitol, which he frequently wore.

This story has been updated with additional information and reaction.