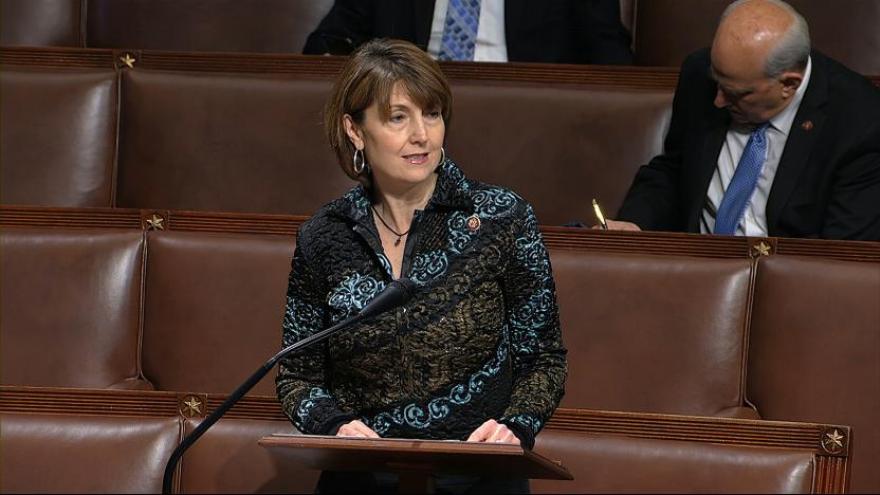 GOP Rep. Cathy McMorris-Rodgers, seen here in 2020, announced on Jan. 6 that she will reverse her position on challenging President-elect Joe Biden's victory after rioters forced a shutdown of the House and Senate chambers of the US Capitol.

(CNN) -- The chaotic US Capitol breach by an angry mob on Wednesday spurred a host of GOP lawmakers to announce they would no longer challenge President-elect Joe Biden's victory.

Sens. Kelly Loeffler of Georgia, Steve Daines of Montana, James Lankford of Oklahoma, Marsha Blackburn of Tennessee, Mike Braun of Indiana and Cynthia Lummis of Wyoming, and Rep. Cathy McMorris Rodgers of Washington state all cited the violent rioters who forced their way into the complex as they announced they would now support confirming Biden's Electoral College win.

Braun flatly said that the mob storming the building convinced him to change his mind.

"I didn't feel comfortable with today's events even though I do believe that election integrity is still a valid issue. Many of us can still pursue it," he said, adding, "when today's events unfolded, I could not dignify it even by withholding something I objected to."

Loeffler, who was projected to lose her seat after Georgia's Senate runoff Tuesday, appeared shaken when she addressed the chamber.

"I cannot now object to the certification of these electors," Loeffler, who had planned to object to Georgia's presidential election results, said on the Senate floor to applause.

Daines and Lankford echoed that message in a joint statement that called the episode "an assault on democracy."

"We now need the entire Congress to come together and vote to certify the election results. We must stand together as Americans. We must defend our Constitution and the rule of law," the pair said.

Blackburn similarly derided the breach as "a crime" and vowed to "vote in support of certifying the electoral college results" in a pair of tweets.

Asked why she didn't vote to throw out Arizona's election results, Lummis pointed to "the activities of the day."

McMorris Rodgers described the scene as "disgraceful and un-American" and said in a statement: "I have decided I will vote to uphold the Electoral College results and I encourage Donald Trump to condemn and put an end to this madness."

She explained that her planned objection to counting electoral votes "was to give voice to the concern that governors and courts unilaterally changed election procedures without the will of the people and outside of the legislative process."

The reversals came only after a mob of pro-Trump protesters pushed through barriers set up along the perimeter of the Capitol, where they tussled with officers in full riot gear, some calling the officers "traitors" for doing their jobs.

About 90 minutes later, police said demonstrators got into the building and the doors to the House and Senate were locked. Shortly after, the House floor was evacuated by police. Vice President Mike Pence was also evacuated from the chamber, where he was chairing debate challenging the electoral votes.

Trump was silent for much of the day before eventually asking the crowd to leave in a videotaped statement.

Only after pleading from aides and congressional allies inside the besieged Capitol did Trump release a video urging the rioters to "go home," while still fanning their baseless grievances about a stolen election.

In the video, he also praised the crowd, who broke into the Capitol using force, stole items from its rooms and posed for photographs in the legislative chambers. "We love you," Trump said. "You're very special."

Some Republicans who planned to object were strategizing among themselves while the Capitol was locked down, and it wasn't clear if they would draw out the process as originally planned. Still, lawmakers in both parties made clear they were determined to finish the count Wednesday evening.

"Today, a shameful assault was made on our democracy. It was anointed at the highest level of government. It cannot, however, deter us from our responsibility to validate the election of Joe Biden," House Speaker Nancy Pelosi said in a statement.

As senators waited to get back on the Senate floor and resume the certification process, some were using the time -- and the frightening reality of what was happening -- to push and cajole the Republicans who had planned to object to states like Georgia and Pennsylvania to back down after they finish debate over Arizona's election results, two Senate sources familiar with the conversations told CNN.

Democratic Sen. Joe Manchin of West Virginia, leaving a secure location with other senators, said there was a belief they would finish the electoral vote count Wednesday night.

"These thugs aren't running us off," Manchin said.