Google Maps is getting better at mapping wildfires 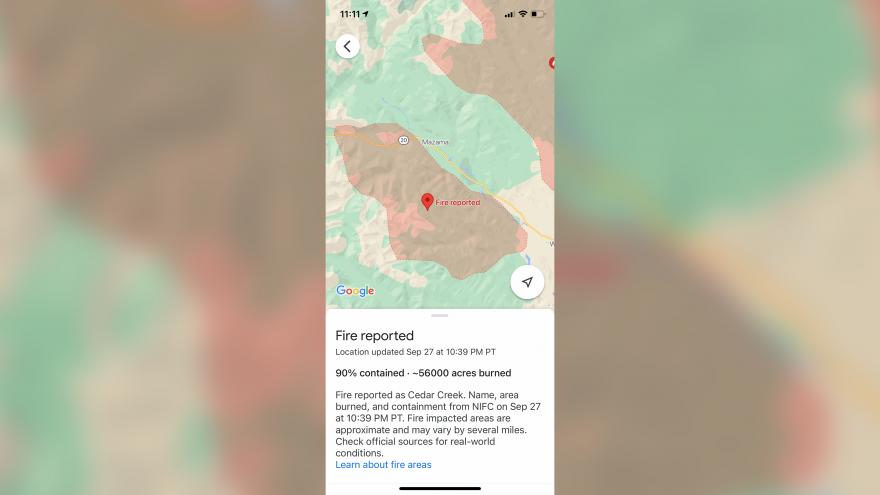 (CNN) -- Google Maps is making it easier to find the latest information about wildfires as part of a push to ensure the immensely popular app is more useful during emergencies.

On Wednesday, Google said it's adding a new wildfire layer to Google Maps, which users will be able to turn on to see the latest details about multiple fires at once. This can be essential during fire season when many fires may burn simultaneously.

The new layer will show "most major fires that cause significant evacuations," according to Google, as well as many smaller fires in the United States. Users will be able to tap a fire on the map for links to details such as emergency websites and information about evacuations. In the US, there will also be data about containment, number of acres burned, road closures, and evacuations. Google Maps plans to expand this feature later this year to Australia, which has also been hit by devastating wildfires in recent years.

Google Maps has a number of existing layers to choose from, such as one that offers Covid-19 data and another that can show bike paths. Over a billion people use Google Maps each month, Google said.

It's already possible to see the boundaries of some wildfires via Google Maps thanks to a feature Google rolled out last year using satellite data from the National Oceanic and Atmospheric Administration. But in a briefing with reporters last week about changes coming to Google Maps, product manager Can Comertoglu said this earlier feature was limited to fires that are bigger than about 7,000 to 10,000 acres. There have been nearly 43,000 wildfires in the US so far this year, many of them quite a bit smaller, but could also threaten homes and lives.

"When they happen, they're important for locals to know about," Comertoglu said.

The new wildfire-mapping feature makes this possible by including data from the US's National Interagency Fire Center, and Comertoglu said Google Maps receives refreshed fire details from it about every hour. The wildfire map layer will be available on Android smartphones this week, and on iPhones and computers in October.