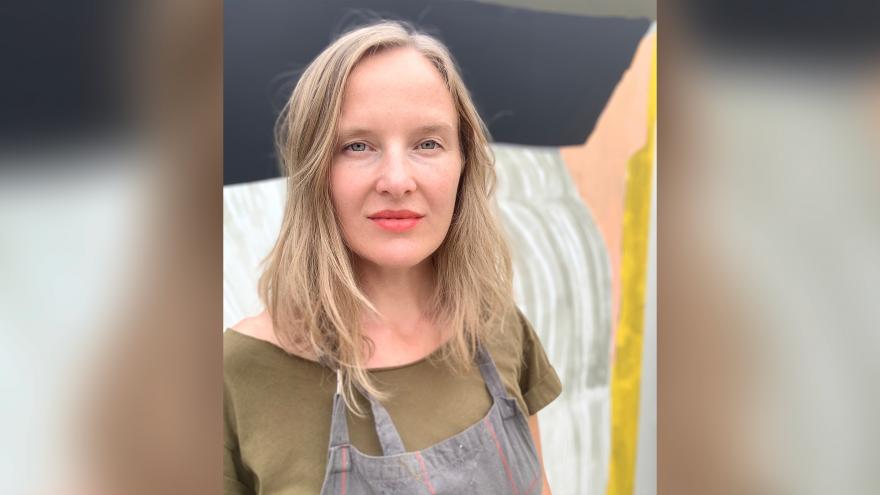 (CNN) -- Two years into a pandemic with a war in Ukraine and gun violence in schools, churches and synagogues, students at a tiny rural California elementary school are offering free pep talks for everyone.

Dubbed the "Peptoc Hotline," the public art project from students at West Side Elementary School in Healdsburg, California, is designed to offer positive and encouraging mantras to help everyone through this trying time. The number to call: 707-998-8410.

The effort was the brainchild of Jessica Martin, a local artist who doubles as the art teacher for the small school. Martin expected the effort to inspire some smiles and maybe lift a few hundred spirits in Healdsburg and the surrounding community. In less than a week, the project has gone viral, receiving between 300 and 500 calls an hour, and up to as many as 5,000 calls a day, Martin said.

"The adults among us have been holding everything up for so long, it's amazing to see what comfort children can bring," she said. "I was moved by the incredible collection of advice and encouragement they gleaned, and how easily and distinctly they were able to communicate it."

Words of encouragement and advice

All the recordings feature children, in their own voices.

In a series of messages for those feeling "mad, frustrated or nervous," one child says, "If you're frustrated, you can always go to your bedroom and punch a pillow or cry on it," while another declares, "If you're nervous, go get your wallet and spend it on ice cream and shoes."

Following a prompt for callers who seek "words of encouragement and life advice," one child offers: "If you're feeling up high and unbalanced, think of groundhogs."

There are instructions and insights in Spanish, with translations of top-level prompts by a second-grade girl. Another option leads to a five-second loop of nothing but children's laughter.

Perhaps the most uplifting option is for those callers seeking a "pep talk from kindergartners." On this recording, a large group of crackly, high-pitched voices cheers in unison: "You can do it!" and "Keep trying, don't give up!"

Martin recorded the messages and laughter in her art enrichment classes two weeks ago.

The hotline presents an opportunity for the community to enjoy the innocence and positivity of their youngest members, according to Rima Meechan, West Side's principal.

Meechan noted that in 27 years as an educator, the "Peptoc Hotline" was the most moving and joyful project her students had ever created. She said she was proud of them and impressed by their compassion and love for each other and the world at large.

"When I called the hotline, I smiled, laughed out loud, and teared up," she wrote in an email.

'Straight from the literal mouths of babes'

Members of the local community have embraced the project in a big way -- sharing information about it on social media and encouraging kids to put up signs advertising it all over town.

Evin Alexander, whose 11-year-old daughter and 7-year-old son participated in the recordings, said she has found herself calling the hotline repeatedly over the last few days to help stay sane amid Russia's war in Ukraine and changing mask mandates in California schools.

"With the masks and everything going on in the world and in my personal life, it's been really moving and heartwarming to hear words of encouragement and love," Alexander said. "While adults might say these things, hearing them in the innocent voices of our kids makes it seem like maybe it's going to be OK. Those voices give me hope."

West Side's "Peptoc Hotline" also has touched those outside of California's wine country.

Amy McWilliams, who lives in Mission Viejo, California, said a friend sent her the number. McWilliams, who has stage 4 malignant melanoma, has called it several times and shared the line with fellow cancer patients to help them endure rounds of chemotherapy.

"It's joy, straight from the literal mouths of babes," she said of the recordings. "We adults forget that spreading kindness and positive thinking can really be that simple."

Martin was inspired for the project by the "social practice" art movement and the work of the late Susan O'Malley, who gave pep talks, asked for advice from strangers and installed inspirational posters in public.

The name for the project came from Martin's 6-year-old son. Once the artist had captured all the recordings, she asked her son to use his special block letters to create a flyer to advertise the hotline. She purposely gave him no direction beyond what she thought would be the name: "Peptalk." He sounded out the words and mistakenly spelled them as "Peptoc," which Martin loved for its honesty and unintentional reference to TikTok. The name stuck.

As of press time, Meechan, the principal, said the district planned to keep the hotline running through the end of the school year. Martin noted she was in the process of seeking outside funding to keep it running long beyond then.

"One of my missions in the art program for the school is to introduce kids to the broadest approach to creative practice as possible," Martin said. "Yes, we're doing painting and drawing, but it's important that these kids also are being exposed to art by artists who are pushing definitions of what art is and the role it plays in our society."