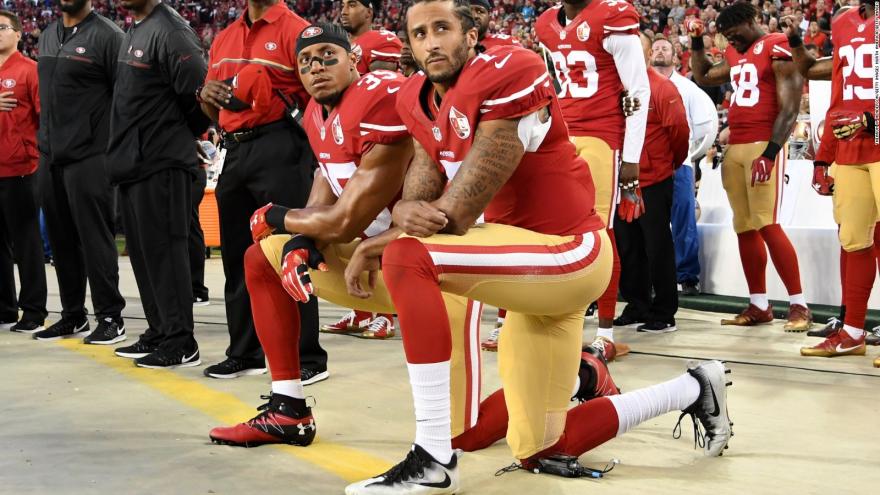 NEW YORK (AP) — In the face of fan unrest and accusations from the president about the league being unpatriotic, the NFL is not changing its national anthem policy to require players to stand.

Commissioner Roger Goodell and several owners said Wednesday at the league's fall meetings that altering the policy language from "should stand" to "must stand" was not discussed.

New York Giants owner John Mara noted that the Cowboys' Jerry Jones "spoke at length" to the other owners about the anthem issue. Jones has said any Dallas player who doesn't stand for "The Star-Spangled Banner" would not be playing.

Goodell reiterated that the league and its 32 clubs "believe everyone should stand for the national anthem. It's an important part of our policy and the game. It's important to honor our flag and our country and I think our fans expect that."

Asked about any owners who threatened discipline for players who didn't stand, Goodell said the owners didn't discuss it.

"It wasn't necessary," he said. "We had a real focus on making sure all of our teams understood the kind of dialogue that took place and the kind of things that they were interested in getting support.

"And they were seeking support for the NFL, each club supporting its players and continuing the dialogue that they have had at the club level. I would tell you this, it's unprecedented conversations and dialogue going on between our players and our owners, between our club officials and between our league, and that is a really positive change for us."

Reminded that President Donald Trump tweeted again Wednesday about the demonstrations during the anthem, Goodell said there was nothing unpatriotic about his league.

"Everyone feels strongly about our country and have pride," he said, adding the NFL is "not afraid of tough conversations.

"What we are trying to stay out of is politics."

On Tuesday, in an unprecedented move for a league meeting, a group of 11 owners and more than a dozen players met for more than two hours at NFL headquarters. Among the topics discussed was enhancing the players' platforms for speaking out on social issues.

The league and players say they have seen their messages getting lost because their demonstrations were misconstrued by the president and by fans.

"I understand the way they feel about these issues," Goodell said Wednesday. "We feel the same about patriotism and the flag and I believe our players feel that way. We have a great deal of support for the efforts of our players."

Several players said after Tuesday's discussions that progress had been made in not only explaining their positions, but in how the 32 teams and their owners could support initiatives.

"I think we all have mutual interests," Eagles safety Malcolm Jenkins said. "I think players are a part of this league, so we want to make sure the quality of product that we put out on the field is great. But at the same time, we have a responsibility to the communities that we live in, the communities that we come from, and so I think we all share that interest in really talk more in collaboration than an us-against-you type of situation."

Like many owners, Mara has told Giants players that they should stand during the anthem, but that if they have a reason that compels them not to, the team won't prohibit it.

He also expects more talks between players and owners in the next few weeks.

"I think there's a consensus to keep having dialogue," Mara said. "That's where our hope is, and we hope over time, few players will kneel."

Mara said he expected the criticism from Trump to continue.