Good news for Joe Biden: America is getting back to work 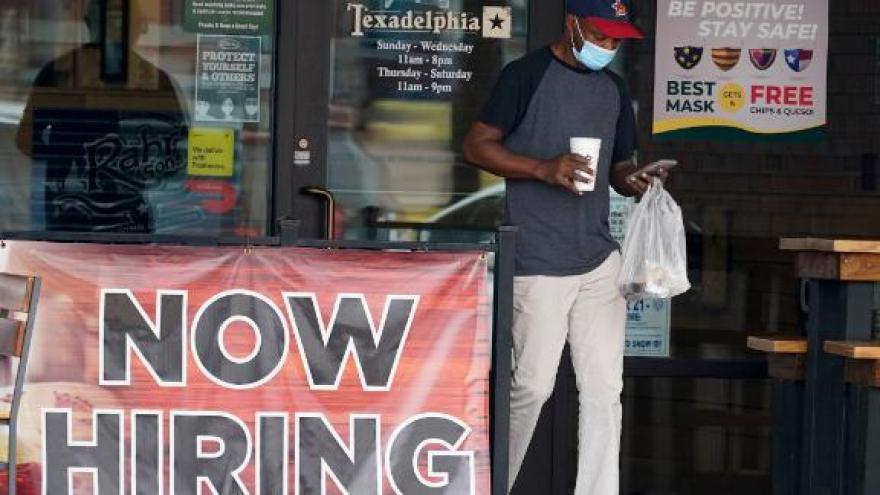 (CNN) -- America's job market recovery hit a roadblock in the late summer and early fall. In recent months, the tally of jobs added to the economy has been disappointingly low.

But economists have high hopes that the streak of bad news will end with the October jobs report, which is due Friday morning. That could be some welcome news for President Joe Biden after voters sent a strong message this week about their disappointment in America's economy.

Analysts polled by Refinitiv expect some 450,000 jobs were added to the economy last month, more than in both September and August. The employment numbers in those months came in well below forecasts, worrying economists about the state of the recovery. But infections from the Delta variant, which were largely to blame for the slow hiring, are fading, giving economists hope that the job market can quickly recover again.

"The easing of the Delta wave will reduce disruptions to schools and encourage businesses to resume hiring," said Glassdoor Senior Economist Daniel Zhao. "The latest wave has not completely receded, though, so gains are still likely to be muted compared to the summer's hot jobs growth."

During that summer hot streak, the US economy added 2.7 million jobs between May and July.

The optimism that October will finally get the nation's jobs growth back on track comes with a range of expectations for Friday's report. Economists at Japanese bank Nomura predict as many as 650,000 jobs were added last month, while Goldman Sachs expects 525,000.

Another sign the jobs recovery is chugging along is the steady decline in weekly jobless claims. Last week, claims for unemployment benefits fell to a new pandemic-era low of 269,000, adjusted for seasonal swings.

That said, no matter how good Friday's report turns out to be, it won't solve America's worker shortage.

As the economy reopened fully over the summer and consumer demand went through the roof, businesses stepped up their hiring efforts. That created a labor market in which workers have their pick of jobs, making business work harder to attract and retain staff.

In August, a record 4.3 million workers quit their jobs, for example — proof of the leverage employees have in the pandemic economy. The number of open jobs in that month stood at 10.4 million, down from the historic peak of 11.1 million reached in July.

The reopening of schools — along with the expiration of enhanced pandemic-era unemployment benefits at the start of September — may have pushed some Americans back into the workforce since the summer, "but not enough to meet the high labor demand," Zhao said.

"Employers are likely to continue to raise wages in shortage-affected sectors, though at a slower pace than during the summer," he added.

Even though these conditions sound pretty promising for workers, nearly two-thirds of Americans view the economy as poor, according to a poll from the Associated Press-NORC Center for Public Affairs Research. Only 35% of respondents said the economy was in good shape.

The culprit for the bad mood is high inflation as well as the supply chain bottlenecks that have crippled global logistics this year.

Meanwhile, the Back-to-Normal index created by CNN Business and Moody's Analytics is at 94% and American consumers are still spending big, good news for the economy going into the all important holiday shopping season.