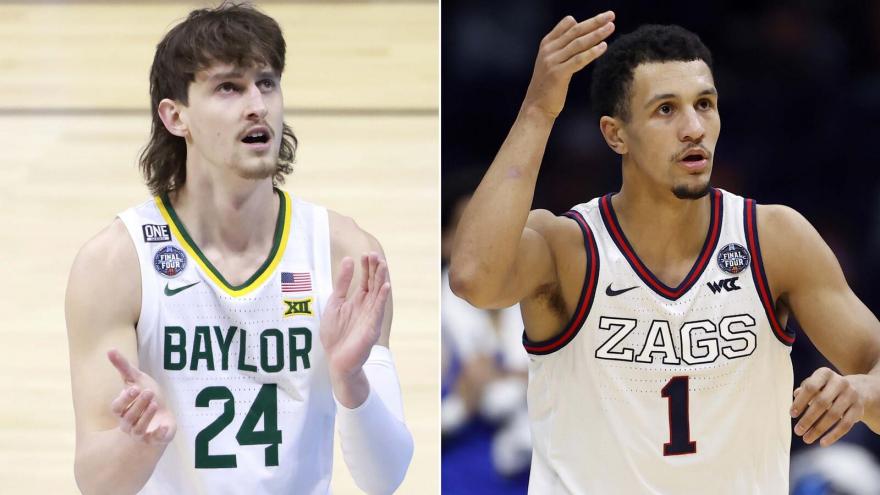 The two best teams in men's college basketball all season long will meet in the national championship game on April 5 when the Gonzaga Bulldogs take on the Baylor Bears.

(CNN) -- The Baylor Bears won their first men's NCAA basketball title with a 86-70 win over the previously undefeated Gonzaga Bulldogs in the championship game Monday night in Indianapolis.

Baylor's win snaps Gonzaga's 35-game win streak, which was the longest active streak in the nation and dated back to last season.

"We're really good defensively. I thought we made things tough tonight," Baylor coach Scott Drew said. "Gonzaga missed some shots that they probably normally make. But credit our guys for making everything difficult."

"They were just so much more aggressive than us," Gonzaga coach Mark Few said. "They just literally busted us out of anything we could possible do on offense."

Gonzaga (31-1) trailed by as many as 19 in the first half and the Bears led by 10 at the half. The Bulldogs briefly got within single digits in the second half, but Baylor pulled away, extending the lead at one point up to 20.

Jalen Suggs topped the scoring for the Bulldogs with 22 points. Drew Timme and Corey Kispert each had 12 points.

"They punched us in the mouth right at the get-go," Kispert said. "And it took a long, long time for us to recover and start playing them even again. But then it was too late."

Gonzaga was coming off a stunning last-second overtime win over UCLA. With a win over Baylor, they would have become the first team to finish a season undefeated since Indiana went 32-0 during the 1975-76 season.

Few said he never saw his team play as if they were weighted down by the pressure to go undefeated. Baylor made it hard for his team to generate any rhythm, he added.

"It's been a fantastic season. These guys have just a great enthusiasm about them. Just such a positive spirit but yet such a competitive spirit. They're such all great competitors," Few said of his team.

Baylor was fresh off a dominating win over Houston in the Final Four. The Bears cruised through its tournament opponents, beating every team by at least nine points.

"Those guys didn't want to lose for each other," Drew said. "They wanted to play for each other. And they're winners. They're experienced. They're tough. They love one another."

This matchup had been two years in the making, at least. Gonzaga and Baylor were among the favorites to win last year's tournament, which was canceled due to the Covid-19 pandemic.

Baylor was playing in the title game for the first time since 1948.

Only two men's basketball teams from Texas have won a national championship. Texas Western's famed team won the 1966 national title and was depicted in the 2006 film "Glory Road."

"Look at how much great basketball we have (in Texas) from high school, AAU, junior college, college," Drew said. "And we haven't won a national championship since '66. It's long overdue for the state and so pleased for all of them."

Gonzaga appeared in the championship game for the second time in program history, having lost to the University of North Carolina in the title contest in 2017.

The title game was played in Indianapolis' Lucas Oil Stadium before a limited crowd as the NCAA finished its men's tournament played entirely in the state of Indiana.

"I think it's harder to win it this year than ever before with the stoppages (because of Covid-19) and testing and the sacrificing your social life just so you can play basketball games; having no fans sometimes," Butler said. "It's just hard to get up sometimes for these games. And I'm just so thankful that we were able to play and the tournament still goes on."

The championship was the fourth basketball title for Baylor University. The women's team has won three championships, including one in 2019.