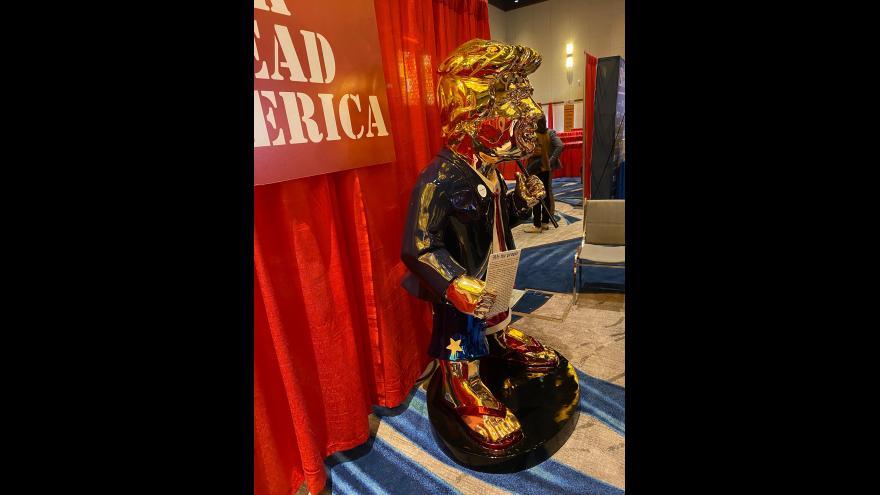 A golden Trump statue is displayed at the 2021 Conservative Political Action Conference.

The more than 6-foot-tall statue turned heads as it was wheeled into the Hyatt Regency Thursday evening while CPAC attendees picked up their registration and milled about the hotel. The statue was on its way to the conference's exhibit hall, where it found a home in a booth for a conservative nonprofit called Look Ahead America.

Tommy Zegan, a California-based artist, created the Trump statue in response to the multiple pieces of art mocking Trump.

"Two years ago, when I saw all those statues of naked Trump and Trump on a toilet, I said, 'You know what? I can do better,' " Zegan told CNN Friday as attendees gathered around the statue to snap photos with it.

Zegan said the piece on display at CPAC is actually the fiberglass mold of the real, stainless steel sculpture currently stored in a warehouse in Tampa where it awaits a potentially high-profile showcase.

"It is museum-quality, and that's the one I'm eventually hoping to get in the Trump library," Zegan said. "It is literally priceless."

The statue is perhaps the most extreme celebration at CPAC of the former president, who will speak here on Sunday in his first public appearance since leaving office. Zegan says every aspect of the statue -- which puts Trump in a suit jacket, American-flag-themed shorts and flip-flop sandals -- is intended to be symbolic.

But when asked if he would like for Trump to ease into retirement or run for President again in 2024, Zegan was emphatic.