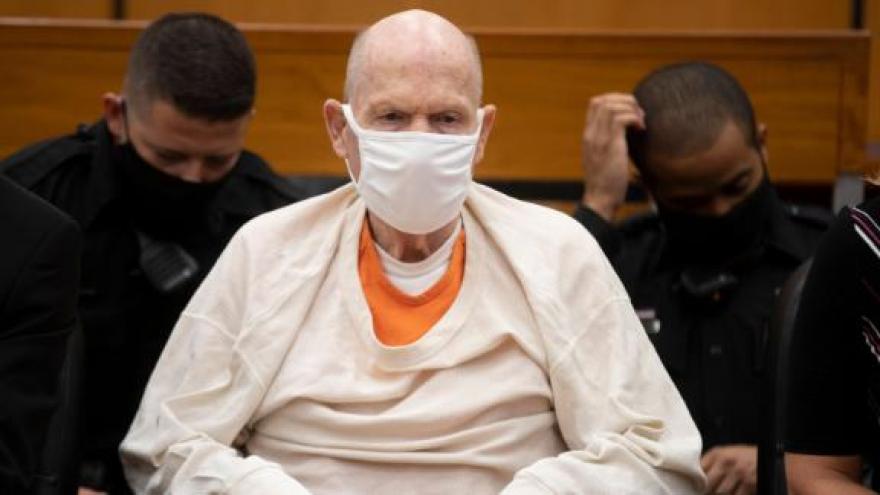 (CNN) -- A former California police officer who became known as the notorious Golden State Killer said he was "truly sorry" before he was sentenced to life without the possibility of parole on Friday.

Joseph DeAngelo, 74, who confessed to 13 murders and dozens of rapes, terrorized the victims in the 1970s and '80s.

"When a person commits monstrous acts they need to be locked away where they could never harm another innocent person," Sacramento Superior Court Judge Michael Bowman said.

Before sentencing, DeAngelo, in orange prison scrubs and a white shirt, rose from his wheelchair and removed a white face mask. He told relatives of his victims, many seated in the vast room: "I've listened to all your statements, each one of them and I am truly sorry to everyone I hurt."

Last June, DeAngelo pleaded guilty to raping more than 50 women and murdering 13 people. As part of a plea deal, he also admitted to crimes he has not been charged with.

Bowman imposed 11 consecutive life without parole sentences, plus an additional life sentence and another eight years. The judge said the court statements delivered by victims and their families "will always stay with me."

"I was moved by their courage, their grace, their strength -- all qualities you clearly lack," Bowman told the defendant.

"This is the absolute maximum sentence the court is able to impose under the law," the judge added. "And while the court has no power to make a determination where the defendant is imprisoned, the survivors have spoken: Clearly the defendant deserves no mercy."

Victims and family members applauded and, moments later, the masked defendant was wheeled out of the large university ballroomwhere the sentencing was held to allow for social distancing.

Prosecutors called for the maximum penalty as they remembered DeAngelo's "voiceless" victims and their "unspeakable" suffering. They referred to the killer as the boogeyman, the devil, a madman and a beast who will never walk the streets again.

Defense lawyers read letters from the defendant's friends and family members in which they described DeAngelo's father as a stern military man and womanizer who abused the defendant as a child. A niece wrote that DeAngelo saved her life after she was physically abused by her own father.

"His horrific crimes are unspeakable and forever changed the lives of our victims," Contra Costa County District Attorney Diana Becton said in a statement after sentencing. "I want to underscore the strength our victims and their families displayed over the years, and their courage this week to share in open court with all of us the pain and agony they have endured over the years."

Orange County District Attorney Todd Spitzer said the victims -- whether in heaven or here on earth -- were now "free from the shackles they and their loved ones were forced to endure since their paths intersected with the devil."

On Thursday, DeAngelos's ex-wife broke her silence in a statement submitted to the court but not expected to be read aloud. Sacramento attorney Sharon Huddle, who married DeAngelo in 1973, said his actions have had "a devastating and pervasive" effect on her life.

"I will never be the same person," she wrote. "I now live everyday with the knowledge of how he attacked and severely damaged hundreds of innocent people's lives and murdered 13 innocent people who were loved and have now been missed for 40 years or more."

Huddle never once refers to him by name and calls him "the defendant" all through.

"I have lost the ability to trust people," she said. "I trusted the defendant when he told me he had to work, or was going pheasant hunting, or going to visit his parents hundreds of miles away. When I was not around I trusted he was doing what he told me he was doing."

A serial rapist known by many names

Over the course of his crime spree that spanned California, Joseph James DeAngelo has been known as the Golden State Killer, the East Area Rapist, the Original Night Stalker and the Visalia Ransacker.

One by one, victims and family members took the stand, describing in unpalatable detail the horrors inflicted upon them by the former police officer.

One woman, who was just 7 years old and asleep when her mother was bound and raped by DeAngelo, described him threatening her mother not to make a sound lest it wake her.

"He threatened to cut my ear off and bring it to her," she said. When she woke, "I could sense evil, then all hell broke loose."

Comparing him to the fictional cannibalistic serial killer Hannibal Lecter, she said DeAngelo was "proof monsters were real. I had met the boogeyman."

Others told of numbness in their hands that lasted for months because their wrists were bound so tightly in the attacks.

More than 40 years after the attacks, most victims spoke of lifelong scars. Many showed defiance and testified about not allowing their lives to be defined by these incidents and finding their way to happiness despite the indelible damage left by DeAngelo. 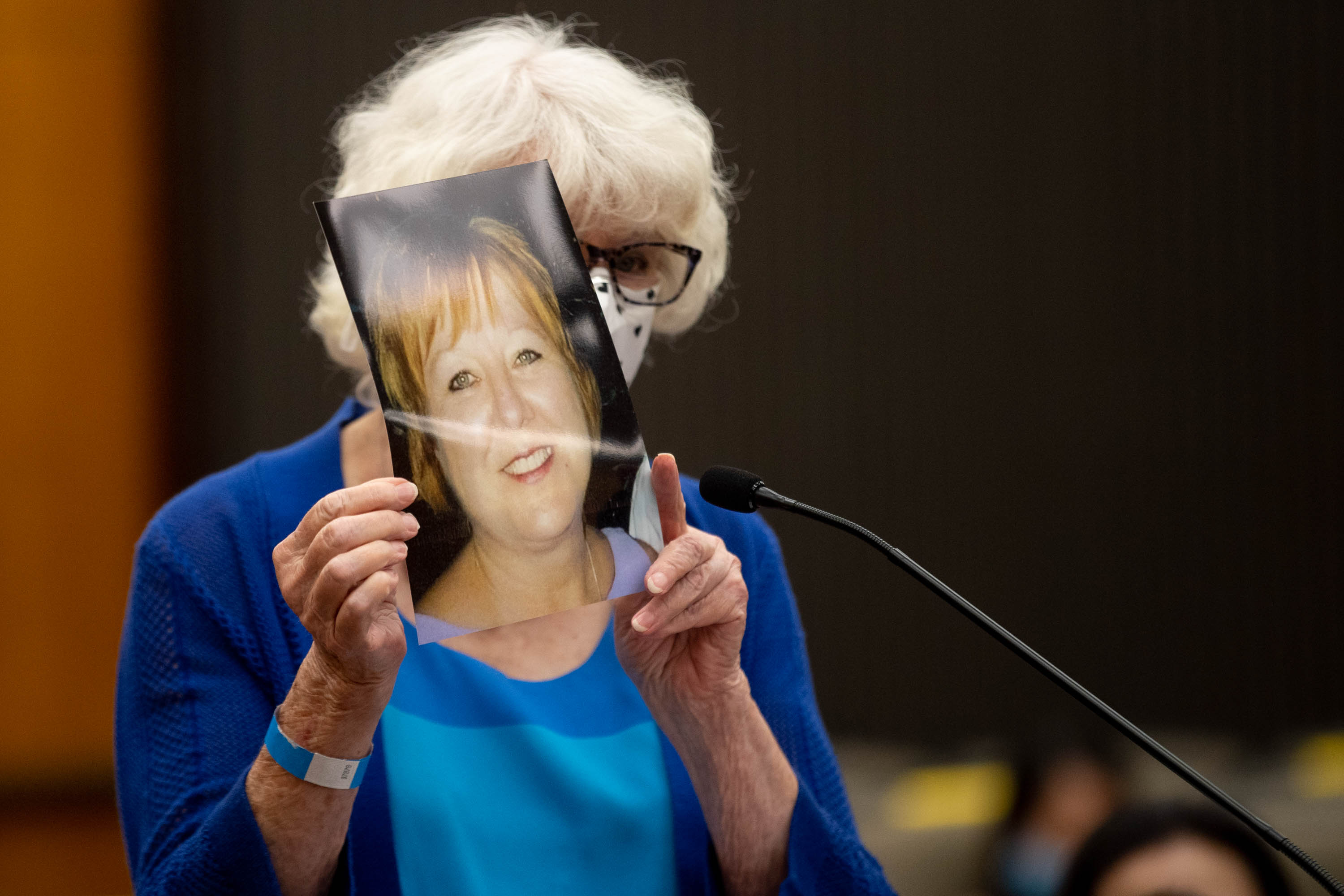 Anger simmered throughout the statements. "May he rot in hell," Karen Veilleux said on behalf of her sister Phyllis. Another woman punctuated her statement by calling DeAngelo "subhuman" and aggressively showing him her middle finger.

DeAngelo made his plea to avoid the death penalty though the state has a moratorium on executions. One man speaking on behalf of his mother said that effort was futile.

"A lot of people might wish to carry out the death penalty themselves, but can't you see? The sentence has already been given. You have been robbed of your entire life, yet you are too stupid to notice," he said.

Six counties brought charges against him

Victims in one of the six counties that brought charges against him voted unanimously to accept his guilty plea.

"Today's plea will never bring the loved ones back or restore the sense of security that was shattered, but today, after 40 years of uncertainty, dozens of victims and a nation heard the person responsible for this reign of terror finally admit that he -- and only he -- is responsible," Spitzer said at the time of the plea deal.

Victims and their families waited for decades to get justice and unmask the man who made a pattern of sneaking in to attack first women alone or with their children and then couples in their homes.

His crimes spanned the 1970s and 1980s. A free genealogy database finally gave authorities the break they needed to arrest DeAngelo in 2018.