Going to the World Series was on this school crossing guard's bucket list. His community surprised him with tickets 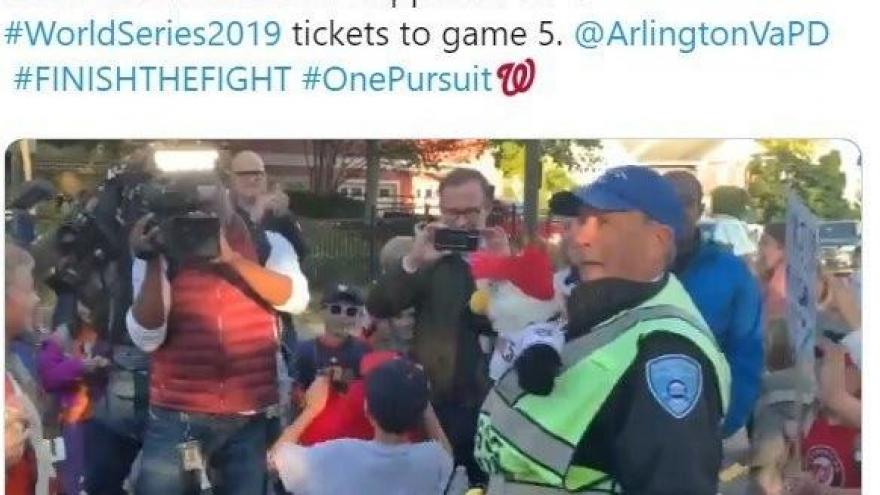 Jeff Covel -- or Mr. Jeff, as his community knows him -- is a diehard Nationals fan and a crossing guard at Nottingham Elementary School in Arlington, Virginia.

(CNN) -- What started as a hand-drawn sign ended in a gesture that will be remembered for a lifetime.

Jeff Covel -- or Mr. Jeff, as his community knows him -- is a diehard Nationals fan and a crossing guard at Nottingham Elementary School in Arlington, Virginia.

So he made a sign with masking tape and marker asking for World Series ticket connections and posted it near his crosswalk while he was on duty.

Sullivan took a picture of Covel's sign and posted it on a private, school-related Facebook page, Wright told CNN. From there Wright told CNN there wasn't a lot of structure around people wanting to help Covel, so she took it upon herself to create a Google form where parents could enter their information pledging to make donations.

Wright said she isn't a huge baseball fan so she started doing research about prices and saw standing-room-only tickets for about $1,000.

"I figured his job is standing so I wasn't gonna make him stand at the World Series," she said.

After she got support online from a handful of families she started collecting the money for actual seats. In total, the community raised $2,445 for the tickets.

"Even when he doesn't have to, he comes to school events to support the kids," Wright said.

Over 60 parents and students surprised Covel on Wednesday with tickets to Game 4 of the World Series, according to Wright, which will be played on Saturday against the Houston Astros.

Covel has been a school crossing guard for six years. He told CNN that after he retired he knew he wanted to do something that involved the youth in his community. "I really love what I do and I enjoy being there with a positive attitude," he said.

Covel said he put up his sign in the off chance in hopes that one of his Nottingham families knew of someone selling tickets at face value. When he was surprised with the tickets a few days after his sign hit the streets, it made him emotional.

"I teared up a little bit when I saw them coming down the street," he said. "To me it means so much to be appreciated for doing something that I enjoy doing. They are my extended family."

Covel and his wife will head to Saturday's game together and plan on getting there a few hours early to take in the experience.

The Nationals currently lead the series 2-0.