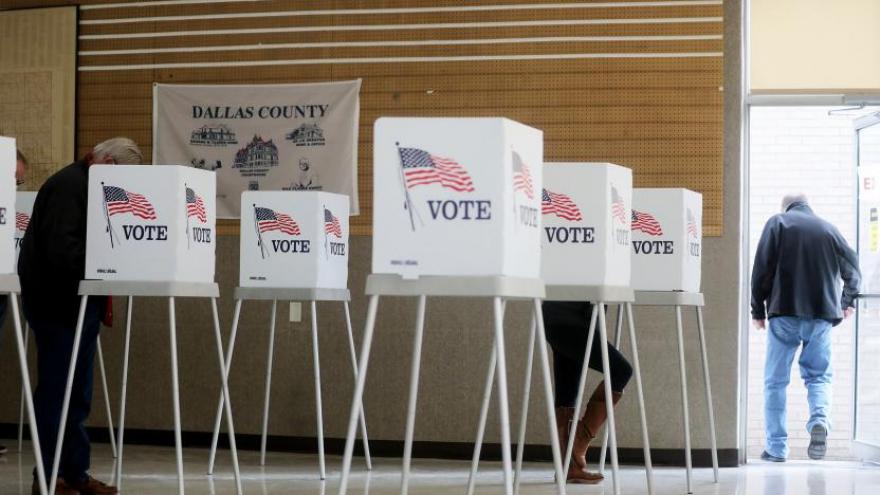 A prominent group of experts that monitors violence around the world has issued an unprecedented warning ahead of Tuesday's presidential election in the United States.

(CNN) -- A prominent group of experts that monitors violence around the world has issued an unprecedented warning ahead of Tuesday's presidential election in the United States.

In a 30-page report, threat trackers at the International Crisis Group -- an organization that frequently reports on instability in failing states and war zones -- warn that a bitterly polarized America faces "unfamiliar danger" in the coming days.

"While Americans have grown used to a certain level of rancor in these quadrennial campaigns, they have not in living memory faced the realistic prospect that the incumbent may reject the outcome or that armed violence may result," the group writes.

In its report, issued last week, the ICG lists several factors that could result in violence on and around Election Day, including the proliferation of online disinformation and hate speech, recent controversies surrounding racial justice in America, the rise of armed groups, and the possibility of a close or contested presidential election.

The group also places the blame for potential violence at the feet of President Donald Trump, writing that his "toxic rhetoric and willingness to court conflict to advance his personal interests have no precedent in modern U.S. history."

On the campaign trail, Trump has claimed he rejects all violence.

However, his refusal to forcefully denounce and condemn fringe and violent factions of the far-right, coupled with incendiary comments about his perceived political enemies, continue to raise questions about whether he is using the full weight of his office to quell potential violence.

In its new warning, ICG experts single out Trump's recent call for an "army" of poll watchers as a factor that could contribute to election-related violence. The group writes that "Trump's use of martial language will signal a desire for supporters, untrained in poll watching, to strike an intimidating posture to deter Democratic voting."

Conflict researchers at ICG also point to Trump's attempts to diminish confidence in mail-voting as another ingredient for potential violence should the results of the election be prolonged or contested, writing, "Trump has already seeded the baseless narrative that mail-in voting will occasion massive fraud and sought to delegitimize post-Election Day vote counting."

The potential for election-related violence is something police agencies around the country have been gearing up to combat.

In Los Angeles, the city's police department has been conducting special hours-long training sessions for personnel on crowd management, including the use of less-than lethal force.

One veteran high-ranking police official said he did not recall this level of preparation prior to any election in his more than three decades on the job.

"I've never seen anything like it," said the source, who requested anonymity because he was not authorized to speak publicly about the matter. "We're doing everything we can to be prepared to protect the city, and not get ourselves hurt, and not become the story," the source said.

The New York City Police Department has already deployed hundreds of additional officers around the city to assist with any issues involving voting locations.

As some businesses in the city are boarding up windows in anticipation of unrest, including the iconic flagship Macy's store in in Manhattan, NYPD Commissioner Dermot Shea told "Good Day New York" on Friday that police are "not telling people to board up their stores, but we're getting those questions from people."

"We're not taking a stance," he said. "They can take any precautions they want. We're not recommending people to board up their stores."

CNN contacted numerous other police departments around the country, many of which indicated they are preparing for any election-related controversies, have curtailed discretionary time off for officers around Election Day, and will be operating command centers to monitor potential issues.

In its report, ICG lists several remedies that could help ensure the integrity of the 2020 US election and potentially prevent ensuing conflict.

For example, experts urge state and local government officials to "become as familiar as possible with the tools and resources that are at their disposal to fend off voter intimidation if the need arises, as well as the mechanisms they can use to extend polling hours and make other accommodations should voting be slowed or disrupted for any reason."

ICG conflict watchers also say the press and social media platforms have important roles to play in ensuring disinformation does not spark violence.

"Traditional and social media should take extra precautions not to pronounce winners prematurely, which can create the impression that the result has been fixed, or, conversely, foster resentment in the event the call has to be reversed," the report states.

Experts also warn that such precautions will be especially critical in covering the 2020 battleground states.

As CNN has previously reported, social media platform Twitter recently announced steps it is taking to curb election misinformation. The company said users, including political candidates, cannot claim an election win before it is authoritatively called. Twitter's new criteria for that requires either an announcement from state election officials or a public projection from at least two authoritative, national news outlets.

ICG indicates foreign governments also bear responsibility in preventing election-related violence inside the United States. The report admonishes foreign leaders against prematurely recognizing a winner of the 2020 presidential election before votes have been certified.

And in language Americans are not typically used to hearing from researches who cover developing and failed states, ICG writes that, "foreign leaders should press U.S. counterparts to respect democratic norms."