Glimmers of hope emerge in the supply chain nightmare 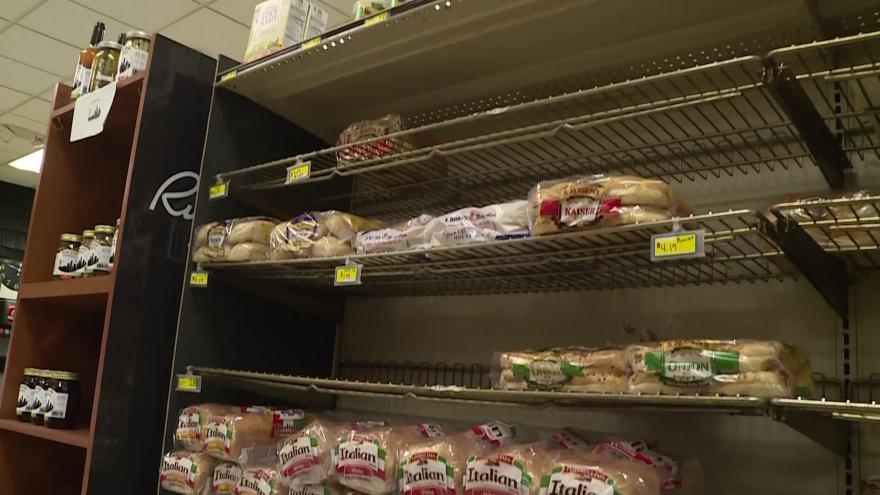 (CNN) -- Epic port congestion is easing. Shipping prices are falling from sky-high levels. Deliveries are speeding up a bit. There are growing signs that the supply chain mess is finally starting to get cleaned up.

That's not to say the supply chain nightmare is over. It's not. And the situation may not get anywhere near back to normal anytime soon.

Businesses are still grappling with a troubling shortage of truck drivers. Critical components, including computer chips, remain scarce. And the Omicron variant threatens to put renewed pressure on supply chains.

Still, there is evidence that bottlenecks are beginning to unclog. That is encouraging given that unprecedented stress on supply chains has contributed significantly to historic levels of inflation in the United States.

"I'm increasingly confident that the worst appears to be over," Matt Colyar, economist at Moody's Analytics, told CNN. "There is data suggesting that things are improving. But there's still a ton of uncertainty."

The supply chain chaos was largely caused by the pandemic. Logistics networks came under enormous strain when the world economy shut down at the onset of Covid — and then rapidly reopened. Demand for goods skyrocketed and just-in-time supply chains buckled under the pressure. Covid outbreaks and inconsistent health protocols around the world added to the mess.

But glimmers of hope can be found in recent economic reports.

For instance, the backlog of orders index in the Institute for Supply Management's manufacturing survey fell to 61.9 in November, down from a record high of 70.6 in May. Backlogs are still growing, but at a slower pace. And supplier delivery rates appear to be improving, albeit from very poor levels.

"It is still going to take a long time for the supply chains across the country to be fully restored, but at least the first steps appear to be in place towards normalcy," Thomas Simons, economist at Jefferies, wrote in a recent note to clients.

The Dallas Federal Reserve Bank's manufacturing index showed the level of unfilled orders ticked lower in November and the amount of time to deliver goods fell.

The improvement in delivery times is encouraging because it is happening even as new orders, production and shipments increase.

"This suggests the improvement is because the surveyed manufacturers' were better able to get stuff out the door, not just because demand cooled down and the phones stopped ringing," said Colyar of Moody's.

Improvement has been more dramatic in clearing up the traffic jam of container ships parked outside California ports.

As of Wednesday, there were 30 container vessels anchored off the Ports of Long Beach and Los Angeles. That's down from a peak of more than 80 at the height of port congestion.

The Biden administration has made a concerted effort to ease pressure on ports, including by convincing the Port of Los Angeles to move to 24/7 operations.

In another positive, ocean borne shipping costs fell 5% in November, though they remain "multiple times" higher than pre-Covid levels, according to Oxford Economics.

"We see the rapid decline in container vessels waiting to unload and falling global shipping prices as possibly leading to some easing in supply bottlenecks," Barclays economists wrote in a recent report, "which if continued, could downstream into other modes of transportation later."

Sameera Fazili, deputy director of the White House's National Economic Council, told CNN she is "heartened" by the fact that long-dwelling containers at the Ports of Los Angeles and Long Beach have come down sharply.

"That's huge. It shows that we've finally restored some fluidity to the system and taken away some of that congestion," said Fazili, who leads coordination of the Supply Chain Disruptions Task Force. "We're happy with the progress but not taking our foot off the gas."

Fazili highlighted that the Biden administration was able to recently convince one leading ocean carrier to commit to offering $100 discounts on containers that are quickly picked up and $200 if they are picked up during off-peak hours.

"We're hopeful that other ocean carriers will see that as a model and seek to emulate it," Fazili said. "That's a very highly concentrated industry and they've seen record-breaking profits."

Some business leaders are also cheering signs of progress.

CEOs "see supply chains starting to open up, although much more slowly than they would like," Joshua Bolten, CEO of the Business Roundtable, told reporters last week.

Others are less optimistic.

"Not only is anyone not seeing a light at the end of the tunnel right now, they are not expecting to see one until well into 2023," Geoff Freeman, CEO of the Consumer Brands Association, told CNN.

Freeman, whose trade group represents companies including Coca-Cola, Kellogg and Procter & Gamble, said the consumer-packaged goods industry has a mostly US-based supply chain, meaning it doesn't feel the benefits of the port improvements as much as others.

The shortage of truck drivers is not new, but it has been made worse by Covid. The American Trucking Associations estimate the industry is short a record-high 80,000 truck drivers.

It's hard to see how supply chains can get back to healthy levels until the truck driver shortage eases.

Freeman encouraged the Biden administration to convince more states to follow in the footsteps of California, South Carolina and Ohio by relaxing state regulations that limit maximum truck weights.

"The White House could be using the power of the bully pulpit here to encourage more states to get in line," Freeman said.

Asked if the White House has considered leaning more heavily on states to relax trucking weight restrictions, Fazili said: "Overweight permits are a state-level decision. When states call us, we make sure they have the information they need to take action."

Fazili added that the administration continues to work with the industry to try to find solutions on trucking capacity.

There remains a lot of uncertainty over when supply chains can get back to normal, or something close to it.

Most (58%) economists surveyed by the National Association of Business Economics anticipate that the supply of goods will begin normalizing in the first half of next year. And nearly a quarter (22%) say this process has already started or will before the end of this year.

The worldwide shortage of computer chips continues to snarl global supply chains, limiting the production of a range of products, including iPhones and new cars.

The chip shortage is having an "extreme impact" on the autos industry, causing the largest decline in vehicle inventories on record, according to Citigroup. And that has caused prices to surge on new and used cars, contributing to the fastest rate of inflation since the early 1990s.

Commerce Secretary Gina Raimondo told CNN last week that this highly disruptive shortage is unlikely to go away until "deep into 2022."

Raimondo also conceded there is reason to worry Omicron will increase stress on global supply chains by making people scared to work in tight quarters like factories.

There's also a risk that Omicron snarls the production and shipment of goods in China and other countries that have zero-tolerance Covid policies.

"That's the worst-case scenario for a global economy struggling to get goods at the rate demand is asking for them," said Colyar, the Moody's economist.

All of this is another reminder of how the world economy remains subject to the whims of the pandemic, for better or worse.

For its part, the Biden administration emphasizes it's not seeking to get back to business-as-usual — because that turned out to be a broken model.

"Covid laid bare that we had really weak supply chains," said Fazili. "Returning to a pre-pandemic norm isn't what we are aiming for here. We are trying to build back stronger and in new ways."