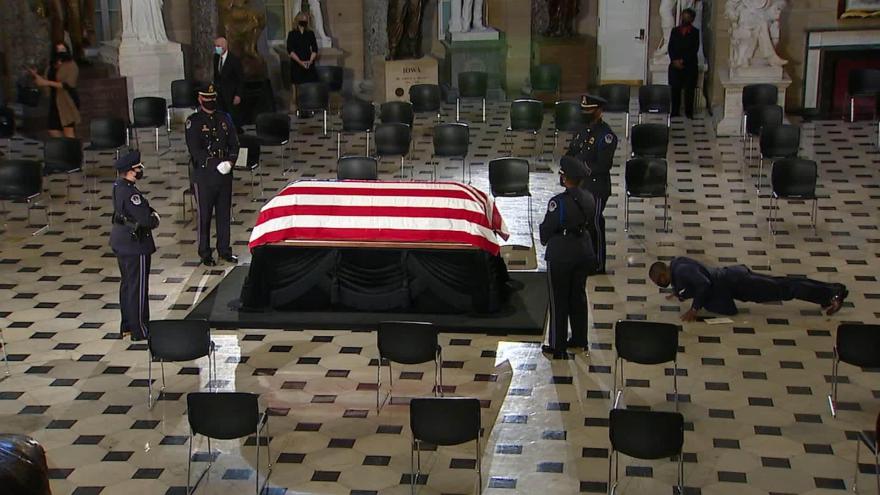 Following the ceremony for the liberal icon at the US Capitol, Bryant Johnson went to pay his final respects to Ginsburg, who he had trained for more than two decades.

Pausing before her casket as it lay in the National Statuary Hall, Johnson dropped and did three push-ups with perfect form.

Johnson, an Army reservist, was Ginsburg's personal trainer since 1999 after she underwent surgery for colorectal cancer.

He was among Ginsburg's family, friends and US lawmakers who attended the ceremony for the legendary jurist at the US Capitol.

Ginsburg, who died last Friday due to complications of metastatic pancreas cancer, became the first woman and first Jewish person to lie in state in the US Capitol on Friday, according to congressional historians.

The iconic leading liberal, known for her stinging dissents, also became an unlikely fitness role model for her commitment to her workouts.

Each time she faced a medical issue, Ginsburg was always quick to return to her workout regimen.

Ginsburg said in 2017 that "a very important part of my life is my personal trainer."

She continued to train with Johnson this year amid the pandemic and as she underwent chemotherapy to treat a recurrence of cancer.

"She's a machine," Johnson said of Ginsburg in an interview with CNN last year.

Johnson also penned a book called "The RBG Workout: How She Stays Strong ... and You Can Too" detailing Ginsburg's fitness routine. Her workout consisted of planking, squats and pushups.