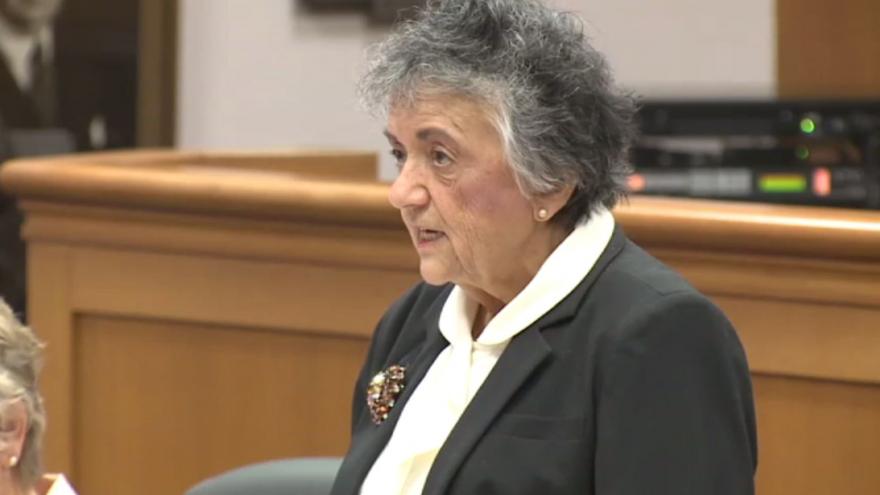 Ginsburg called the retiring Abrahamson "the very best, the most courageous and sage, the least self-regarding" jurist she has encountered in the world.

"Remembering the not-so-good old days when women at the bar were barely seen and seldom heard, Justice Abrahamson has contributed enormously to the advancement of women's opportunities and well-being in the legal profession," she said. "As lawyer, law teacher, and judge, she has inspired legions to follow in her way, to strive constantly to make the legal system genuinely equal and accessible to all who dwell in our fair land."

Several hundred people packed the state Capitol rotunda for the ceremony. The crowd gave Abrahamson a standing ovation at the end of Ginsburg's video. The 85-year-old Abrahamson rose from her wheelchair and clapped in acknowledgment.

Abrahamson briefly addressed the crowd before Ginsburg's video played, joking that she regularly gives everyone a piece of her mind. She stressed the need for an independent judiciary, saying partisanship has grown "poisonous."

"Too much is at stake not to believe in an independent judiciary," she said. "I still believe in it and I hope you do as well."

Despite her call for judicial independence, Abrahamson's connections with the Democratic Party were on full display. Speakers included John Nichols, a liberal columnist, Democratic Gov. Tony Evers and former Democratic Gov. Jim Doyle, whose father hired Abrahamson at his law firm in 1962.

Nichols called Abrahamson "the living, breathing embodiment of justice." Evers choked up as he thanked Abrahamson for her service. Doyle noted that his family has been friends with Abrahamson's family for years and she chaired his first campaign for office.

U.S. 7th Circuit Court of Appeals Judge Diane Sykes was the only conservative who spoke. She served as a Wisconsin Supreme Court justice before then-President George W. Bush appointed her to the federal bench in 2003.

"I'm grateful ... for all the times she challenged me on my opinions, although that's easier to say now than back then," Sykes said.

Then-Gov. Patrick Lucey, a Democrat, appointed Abrahamson to the high court in 1976, making her the state's first female justice. She was re-elected four times to 10-year terms starting in 1979. She broke the record for longest-serving justice in 2013, her 36th year on the court. Then-President Bill Clinton considered putting her on the U.S. Supreme Court in 1993, and she was later profiled in the book, "Great American Judges: An Encyclopedia."

Despite her long list of accomplishments and accolades, Abrahamson's later years on the Supreme Court were rocky ones.

She repeatedly clashed with conservative justices, angering them so much that Republican legislators started pushing a constitutional amendment in 2015 that led to her removal as chief justice.

The amendment enabled the justices to choose their chief instead of giving the title to the most senior member of the court. The measure passed a statewide referendum to become part of the state constitution. Empowered by the change, conservatives on the court used their majority strip Abrahamson of her title and hand it to Pat Roggensack. Roggensack attended the ceremony but didn't speak.

Abrahamson's health began to fail in 2018. She frequently missed court hearings, participating by phone or not at all. That May, she announced she wouldn't run again and in August, she revealed she has cancer.