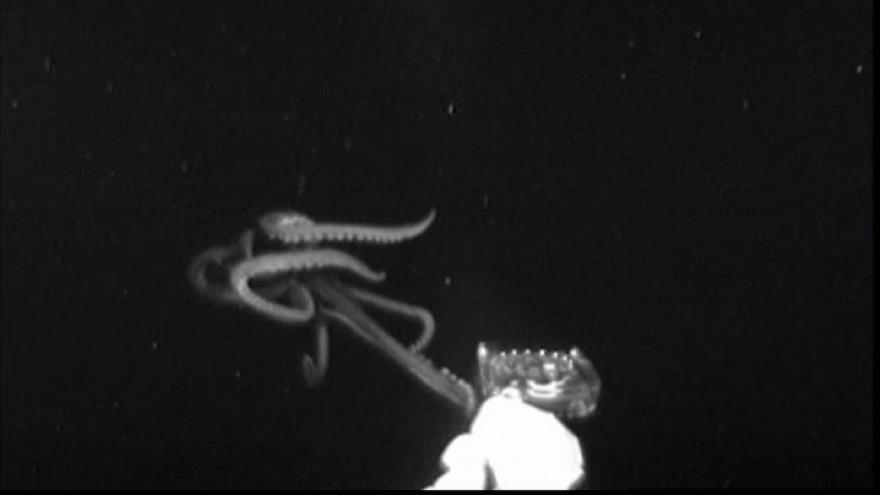 Scientists spotted a giant squid in US waters, just over 100 miles from Louisiana and Alabama. Full credit: Edie Widder and Nathan Robinson

(CNN) -- Few scientists get to just go on a mission for the sake of exploring. Even fewer get to encounter rarely seen images of animals in their natural habitat. But a group of scientists on a research mission in the Gulf of Mexico got to do both.

The two-week mission was funded by the National Oceanic and Atmospheric Administration's Office of Ocean Exploration and Research. Scientists Dr. Edie Widder, Dr. Sönke Johnsen, and Dr. Nathan Robinson, along with their crew, dove their cameras into the depths of the ocean to capture any life beyond the human eye. At just over 100 miles from Louisiana and Alabama, they made a historic discovery: a giant squid in US waters.

The team deployed technology called the Medusa camera fit with a special lure name the electronic jellyfish five times during the trip to attract deep sea animals. Because infrared light is absorbed in the ocean, Widder, who is the founder of Ocean Research and Conservation Association, tells CNN that the light on the lure is uniquely designed. It's the same technology Widder used in 2012 to capture the first Giant Squid ever recorded on video in Japan.

Widder didn't think she would get the chance to see the animal again.

The camera's five deployments each took 24 hours to complete, so by the time Robinson sat down to review the film there was over 120 hours of coverage -- and the surprise was waiting at the very end.

"I started to see a tentacle and I got more and more excited and then when the tentacles pulled back there aren't words to describe it," Robinson, director of Cape Eleuthera Institute in the Bahamas, told CNN.

Robinson said he then gestured to Widder to come see what he found. When she came over he said there was a moment that it dawned on them that history is being made.

It's the second time in Widder's career and the first time in US waters that a giant squid had been captured on film over 750 meters underwater.

Robinson said they knew it was a giant squid for several reasons, but the biggest two were the body shape and the arrangement of the suckers.

"We all proceeded to go slightly nuts," Widder said. "We know so little about how these animals survive in the depths... this helps us learn something more about how they hunt and their energy budget, but we need to know a lot more."

Widder continued by explaining that all of the giant squids could be gone before we even know how many are in the ocean.

A way to promote conservation

"It's easier to see whales and dolphins, but it's very difficult to get excited about the something covered in thousands of tons of water," Johnsen said. "At a time in the world when the environment is in crisis people protect what they love, and they love what they see."

All of the scientists talked about how the discovery can help to engage the public and get others involved in conservation efforts. By seeing the animals in their natural habitat it can grow a love for animals that are not as visible to humans.

"Love of nature is a stronger force for conservation than fear of doing the wrong thing," Johnsen said.