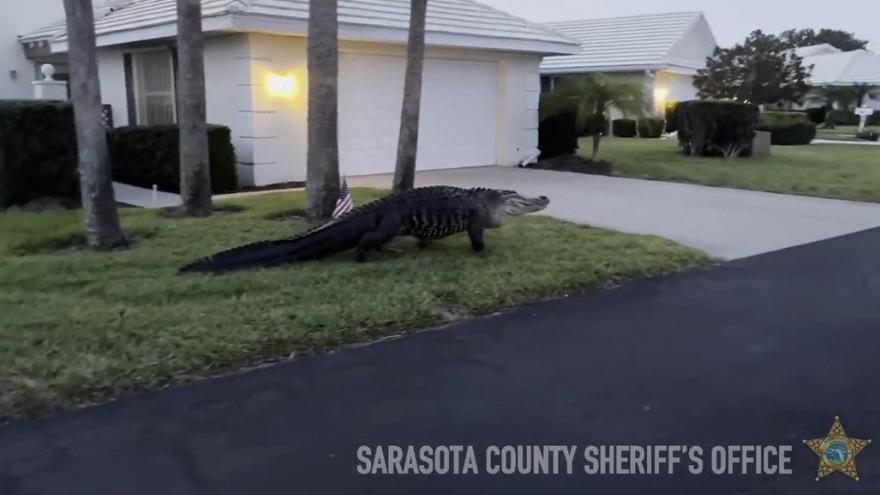 VENICE, Florida (WFOR) -- It wasn’t the Easter Bunny captured on video hopping through a Florida neighborhood on Sunday morning, but a very large alligator taking an early morning stroll.

The Sarasota County Sheriff’s Office shared a video on its Facebook page of what they estimated to be a 10-foot alligator strolling through the Venice, Florida, neighborhood. Venice is south of Tampa on Florida’s Gulf Coast.

“Just walking our pet alligator this morning,” said the man recording the gator.

The Sheriff’s department stated the Florida Fish and Wildlife Conservation Commission was advised of the gator’s presence but did not respond.

The giant gator eventually made its way into a community lake.

Venice is a real hot-spot for large alligators these days. On April 11, Florida man Daniel Kaufman watched in disbelief when a a different but just as large alligator, which was also missing a foot, walked across a busy road in Venice and vanished underneath his truck before reappearing on the other side.

Co-existing with alligators is part of life in Florida, especially during mating season which is here now. It’s when alligators are much more active and often lead to more frequent run-in with humans. FWC reminds the public that alligators should be left alone. State law prohibits killing, harassing, or possessing alligators except under permit. You should never remove one from its natural habitat.

If you’re concerned about an alligator larger than 4 feet in your area and believe it poses a threat to people, pets or property, FWC says to call its Nuisance Alligator Hotline at 866-FWC-GATOR (844-392-4286).