Giant 4,000 pound sunfish was rescued from a fishing net off the Spanish coast of Ceuta 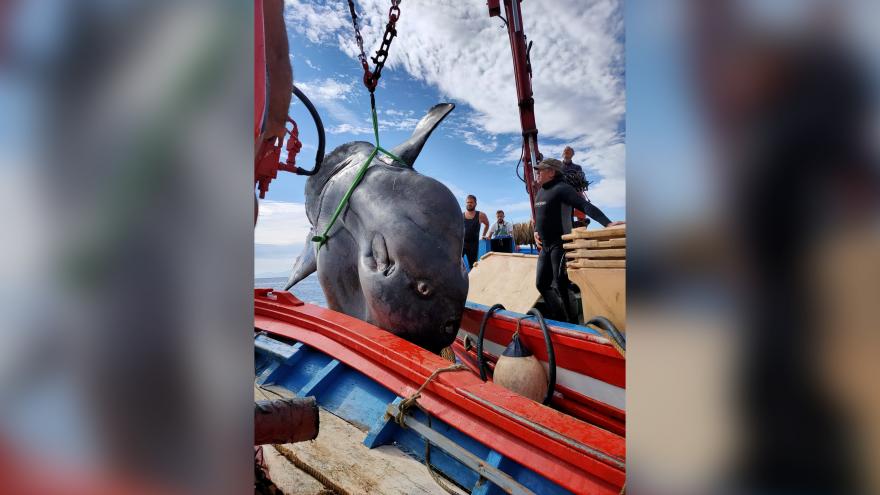 (CNN) -- To the surprise of researchers and sunfish enthusiasts worldwide, a more than 4,000-pound sunfish was found tangled in the nets of a tuna-fishing boat off the coast of Ceuta, an autonomous Spanish port city in north Africa bordering Morocco, on October 4.

The mammoth sunfish measured 10.5 feet long and 9.5 feet wide. Enrique Ostale, who leads the University of Seville's Marine Biology Lab in Ceuta, estimated that it weighed about 4,400 pounds, based on comparisons with other catches.

"We tried to weigh it, but we just had a scale up to one thousand kilograms, and in this case, we couldn't use it because it was going to break," he told CNN in Spanish.

Ostale told CNN that his research team has been working with local almadraba fishermen, who use nets attached to boats to catch fish like tuna, for four years to study sunfish. Based on their catch, the fishermen and researchers select what interests them while returning the other species to the sea. However, in this instance, the fishermen alerted Ostale and his team -- who were working on a study of invasive algae at the time -- to quickly come over and see the massive catch.

Because the animal was so heavy, the researchers used a crane to lift it after being isolated in an underwater chamber attached to the boat. They then measured its dimensions and took close pictures and DNA samples.

"We had seen it in a book and in scientific articles, and to have it there, to tell you the truth, I was very impressed," Ostale said. "Above all, you also have to imagine the stress that is created in the aspect that we are at sea, we are on a boat, the animal is alive, we have to pass it quickly in the open sea while nobody gets hurt."

According to Ostale, while there have been sunfish recorded in other parts of the world that are this size, fishermen and other researchers had not seen one nearly as large near his research center. The sunfish had dark gray skin and rounded grooves in its flanks, which led Ostale to think it was of the species Mola alexandrini.

"I see, on one hand, the luck of finding it and finding it alive, and enjoying it, and swimming with it," he said. "On the other hand, we also were lucky since it was difficult to manage with the cranes, because we have to think that we were on a boat, that we were in the middle of the sea, and an accident can always happen."

The 'great oddballs' of the ocean

While the species Mola mola, or common sunfish, has been studied more extensively than Mola alexandrini, the latter has taken over many measurement records. According to Ostale, Mola alexandrini have rather robust heads, but they lack tail fins.

According to Thys, the sunfish discovered in Ceuta was likely more than 20 years old and most likely is a female, since no large males greater than two meters have been found so far.

The world record weight of a sunfish goes to a specimen from Japan with a total length of 272 centimeters, or about nine feet, who weighed a whopping 2,300 kilograms, or 5,070 pounds. The longest specimen on record, though, is 332 centimeters, or almost 11 feet, but it was never formally weighed.

Mola alexandrini may likely spawn close to the waters where this one in Ceuta was found. They may also spawn off New South Wales, Australia, and they have been known to travel thousands of kilometers -- including from Taiwanese waters to New Caledonia.

According to Thys, the field of ocean sunfish research is very active, and a species called Mola tecta was named a couple of years ago.

Although researchers don't know how long Mola alexandrini can survive after spending time in the nets -- and know little about their population structure or life span -- Thys is grateful that the fish was returned safely to the water that day where it can "eat jellies, ply the waters, (and) live its wondrous life and spark wonder and awe in more people."

"This individual is a colossal reminder that our world ocean still holds many mysterious surprises including massive marine megafauna which cause us to gasp with wonder and awe," Thys wrote. "Big headed behemoths like this ocean sunfish can act as potent ambassadors to pique our curiosity, inspire greater understanding and fuel public desire to be better stewards of our marine ecosystems which are our planet's life support system."