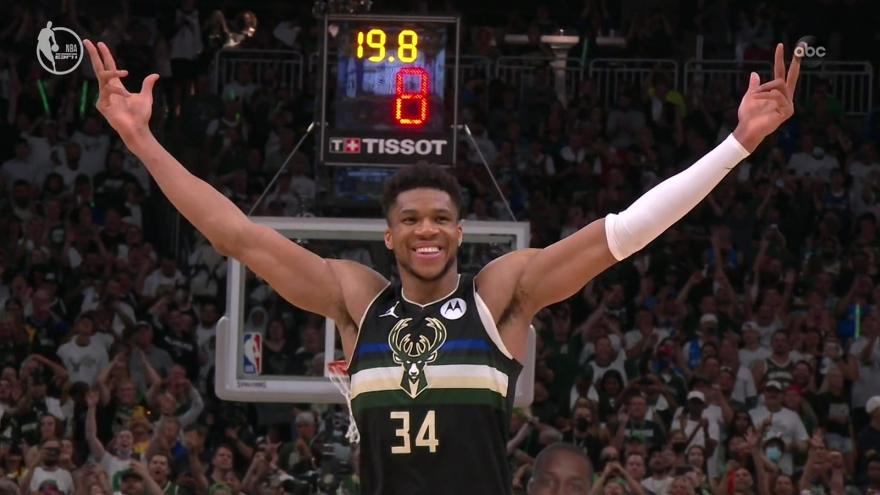 (CNN) -- Giannis Antetokounmpo notched his fourth triple-double of the season as the Milwaukee Bucks beat the visiting Washington Wizards 112-98 on Tuesday.

The "Greek Freak" scored 33 points in total, adding 15 rebounds and 11 assists in yet another dominant performance.

He has now surpassed Michael Jordan's total of triple doubles and sits 18th on the all-time list after recording the 29th of his career.

Antetokounmpo, who failed to score in the first quarter, said the win went someway towards compensating the Bucks' defeat to the Denver Nuggets last time out.

"We have to realize that in order for us to be great, we've got to play hard. We cannot expect that people are just going to hand us the game when we go out there," he told reporters after the game.

"People are coming for us. People are hunting us right now.

"They get excited when they see, 'Milwaukee Bucks, world champs.' We've got to play every single night hard and build that habit."

It wasn't just Antetokounmpo in fine form for the defending champions, with four other Bucks players hitting double figures at the Fiserv Forum -- Jrue Holiday with 22 points, Bobby Portis with 17, Khris Middleton with 13 and Grayson Allen with 10.

The Wizards, meanwhile, have now lost six consecutive games and were without star guard Bradley Beal on Tuesday.

Beal was diagnosed with an injury to his scapholunate ligament in his left wrist and will miss the next few games for Washington as they continue to assess his recovery.

Next up for Antetokounmpo and the Bucks is a trip to Portland to face the Trail Blazers at the weekend, with fans hoping the 27-year-old can continue his MVP-level form.