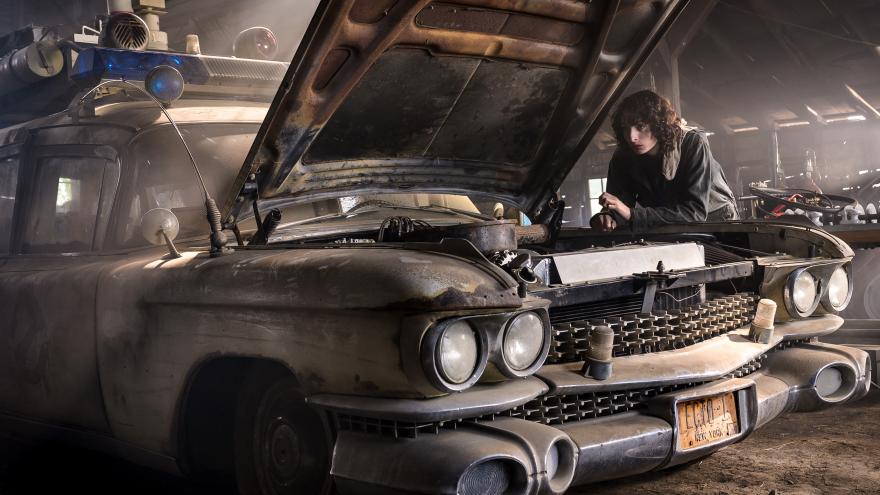 (CNN) -- In 1984, a film about three New York City owners of an unconventional startup took the country by storm, leading people — young and old — to ask one simple question: "Who you gonna call?"

That film was "Ghostbusters," one of the most successful comedies of all time. Now, 37 years later, a new group of paranomal patrollers are strapping on their proton packs (and trying to not cross the streams) with "Ghostbusters: Afterlife." The latest film in the spooky franchise haunts theaters this weekend.

"Afterlife" — which stars Paul Rudd, Mckenna Grace and Finn Wolfhard — is expected to have roughly a $30 million opening in North America this weekend, according to industry expectations. That's a solid start for the film, which made $4.5 million on Thursday night.

Yet, there's reason to believe that the latest "Ghostbusters" could have quite an afterlife at the box office: It's a sequel to the 1984 classic, a phenomenon that notched $227 million domestically, according to Comscore. (That's more than $600 million when accounting for inflation.)

The film's popularity bled into nearly all parts of culture, spawning TV shows, toys, Halloween costumes and the most delicious drink of all time, Hi-C's Ecto Cooler. Oh, and there also was a song based on the film. You may have heard it.

Sony is using every bit of that nostalgia to sell "Afterlife" this weekend.

The film's trailers and promotional materials include familiar iconography from the series, such as the crew's Ecto-1 car as well as ghosts and creatures from the original. The Stay Puft Marshmallow Man — who is now tiny and cute rather than giant and menacing — is all over the trailers, for example.

The previews also hint that some of the original cast, perhaps Bill Murray and Dan Aykroyd, might pop up in the film, and "Afterlife" is a family affair with Jason Reitman directing. His father, Ivan, helmed the original.

The "Ghostbusters" brand has been a part of the pop culture consciousness for the last 40 years, but does that mean audiences will show up for "Afterlife" this weekend? The answer is unclear if you look at the box office numbers of the last two films in the franchise.

The original film was followed up with "Ghostbusters II," which reunited cast and director in 1989. That film — in which the Ghostbusters enlist the help of the Statue of Liberty to fight a malicious painting that's come to life (seriously) — failed to reach the heights of the original. It made $112 million in the US and garnered lackluster reviews.

In 2016, Sony tried to revive the series, with an all female cast led by Melissa McCarthy and "Saturday Night Live's" Leslie Jones, Kate McKinnon and Kristen Wiig. That film — which was burdened with an online backlash from people upset that the ghostbusting team was now all female — also failed to make a big box office splash, making $128 million domestically.

"Ghostbusters: Afterlife" is dealing an ongoing pandemic and a 62% review score on Rotten Tomatoes, so will this version follow in the footsteps of the hit original or fade like the last two films? Sony is hoping that it's the former.

If so, the studio can end 2021 on a hot streak with a hit film in October thanks to "Venom: Let There Be Carnage," in November with "Afterlife" and possibly even in December with "Spider-Man: No Way Home" — which is expected to be the biggest blockbuster of the year.

Theaters — which are coming off their strongest month in 2021 — are also looking for the film to keep momentum going into the holiday season, which kicks off next week.

But however loved the brand may be, Hollywood will just have to wait and see if audiences answer the call this weekend.