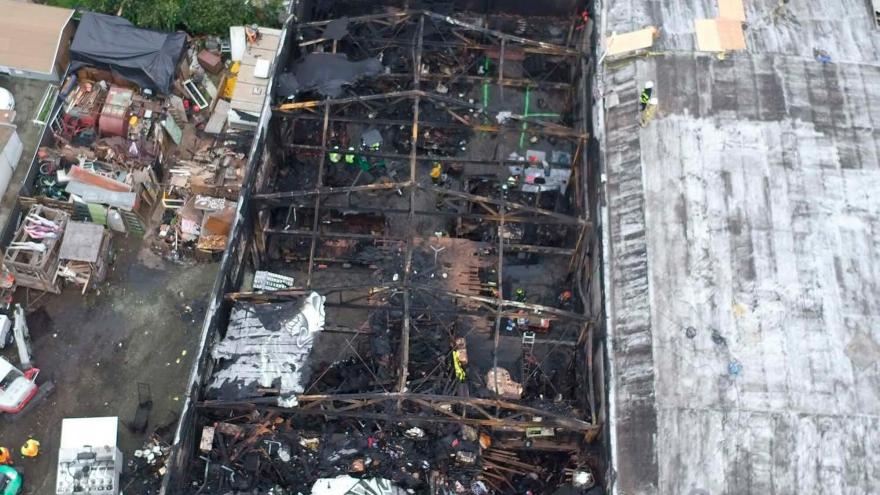 This undated file photo provided by the City of Oakland shows inside the burned warehouse after the deadly fire that broke out on Dec. 2, 2016, in Oakland, Calif.

(CNN) -- Derick Almena, the leaseholder of an Oakland, California, warehouse-turned-art collective that went up in flames in 2016, pleaded guilty Friday to 36 charges of involuntary manslaughter -- one for each person killed in the blaze.

In court Friday, Almena simply responded "guilty" to each of the three dozen counts as they were read out by Alameda County Superior Court Judge Trina Thompson. He was ordered to remain under electronic monitoring before returning to court on March 8 for sentencing.

Almena's previous trial in 2019 ended in a hung jury. His co-defendant was acquitted.

Almena's guilty pleas Friday were part of an agreement under which he's expected to serve between 9 and 12 years in prison. A previous plea agreement that was expected to result in a 6-to-9-year prison sentence was thrown out in 2018 by a different judge.

Dubbed the "Ghost Ship," the dilapidated Oakland warehouse was a place Almena would rent out to artists. Prosecutors initially announced charges in 2017, saying Almena and his co-defendant allowed more than two dozen people to live in the warehouse, deceiving officials and the building's owners of that fact. They also stacked large quantities of flammable materials from floor to ceiling.

According to the probable cause document, Almena "allowed and encouraged tenants to use nonconventional building materials that he collected to create their living spaces." Those materials included "recycled dry wood, such as fence boards, shingles, window frames, wooden sculptures, tapestries, pianos, organs, wooden furniture, RV trailers, rugs, and other ramshackle pieces."

They also held music events there, and on the night of December 2, 2016, an electronic dance party was underway when the inferno broke out.

Ultimately, 36 people died when they were unable to escape. One of the warehouse's exits had been blocked, and the building was missing important safety features, like fire alarms, marked exits and sprinklers, according to authorities.

It was one of the deadliest nightclub fires in US history.